COLUMBUS â€” The next wave of star receivers arrived en masse just about a week after the Buckeyes arrived back home from the devastating loss in College Football Playoff.

The pressure of great expectations arrived with them.

“It’s really exciting,” Julian Fleming, speaking Wednesday during his first Ohio State media availability, said. “You know there’s a lot of expectations with this class, especially at receiver. I’m hoping we could all live up to them.”

The Buckeyes are counting on them to start doing it early. And based on their reputations, there’s plenty of reasons to expect the Fab Four can do it.

Fleming, the country’s top-ranked receiver, is from Pennsylvania and picked the Buckeyes over Penn State. Jaxon Smith-Njigba, a fellow 5-star wideout from Texas, was the No. 5-ranked wideout and said no thanksÂ to the Texas Longhorns when they tried to flip him from the Buckeyes in the middle of his record-breaking senior season. No. 10-ranked receiver Gee Scott told his home-state Huskies no when he bolted from Washington. Former Texas commitment Mookie Cooper, ranked No. 16 nationally and never had any interest in another school after Brian Hartline and Ohio State made him their top choice as the perfect slot/inside receiver to complement Fleming, Smith-Njigba and Scott.

Each of those players chose Ohio State knowing full well that they wouldn’t be The Man in the Buckeyes offense, though they certainly could’ve been if they’d stayed home. That’s not being ignored. These guys want the pressure. They want expectations and that’s precisely why they chose the Buckeyes.

Ohio State wide receiver Jaxon Smith-Njigba is a month into his career with the Buckeyes. (Birm/Lettermen Row)

“That’s definitely one of the first things we always talked about — I mean even before coming here, we told each other we wanted to be the best to ever come through as a unit,” Smith-Njigba, who moved up 300 spots in the national rankings in his final year at Rockwall High School, said. “We push each other. We all just push each other and we’re all just trying to be great, and this is the best program to be at to do that.”

Living up to those expectations means that the group has to succeed in a major way on and off the field in a position room that has been the heartbeat of the program year in and year out since Urban Meyer famously called it a “clown show” back in 2012. These receivers are, on paper, one of the best single position hauls in the modern era of college football recruiting. To become that on the field means embracing the struggles that come with leaving home for college, and doing that as one piece of a group that will likely have their Ohio State careers judged collectively, rather than individually.

That means success can’t happen doing it all alone.

With each day they spend together, the four very different personalities are learning about each other. They learn more and more how they will fit together between the lines and between their spare time.

“All our lockers are right by each other. We all talk before workouts, crack jokes. Weâ€™re all in group chats. … I feel like weâ€™re going to have a good group.”

In the modern era of college football and recruiting, cynics begin looking for reasons to push players into the transfer portal oftentimes before they’ve ever played a snap at the school they picked. The path of least resistance to early playing time isn’t a bad idea, but it’s also not what motivates this special quartet. Competition and the chance to be a part of something special do.

Mookie Cooper is the “goofy one” among the new Ohio State receivers. (Birm/Lettermen Row)

That desire for competition is rare. It’s also what often separates proverbial wheat from the chafe when it comes to football success in a program like Ohio State. That edge is the common thread that binds these receivers and keeps them pushing each other as football players while they develop as men away from the field.

Gee Scott is a to-the-point, natural leader who speaks like a 10-year NFL veteran. Smith-Njigba, probably as a result of his late-bloomer role on the recruiting trail, has no real desire to talk about his game, focusing instead on playing it. Cooper was incredibly hurt by decision made by the adults in charge of the Missouri High School Sports Association that prevented him from playing last season at a new high school in order to graduate early, so he requires a bit more time to get comfortable and trust the people around him. Fleming is quiet but not shy — and is undeniably confident. 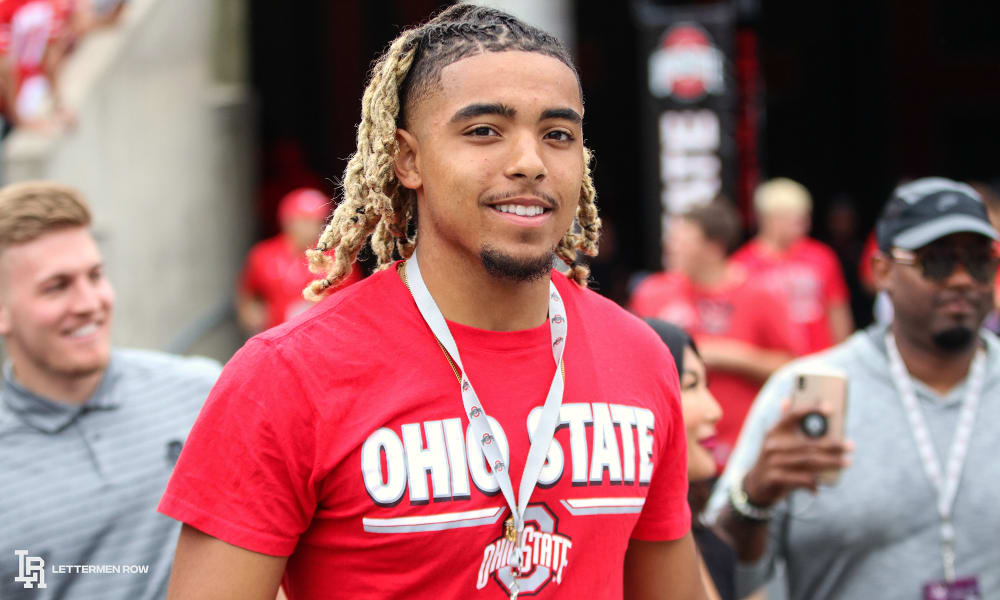 Gee Scott committed to Ohio State on Christmas Day in 2018 and never considered any other school. (Birm/Lettermen Row)

“Iâ€™m the goofy one,” Cooper said. “In the locker room, you can come in in the morning, you can expect Gee to be playing gospel music or some [other] music playing, but weâ€™re all cool. So itâ€™s like, everybody will laugh at me. When Gee come in the room, Gee’s going to be more of the guy to help everybody come on when itâ€™s time to be serious, heâ€™s going to be the one to help everybody get serious.”

This group that come from very different places, sure, but the common ground seems to more noticeable as they grow closer to one another.

“I mean, you ever hear that opposites attract?” Fleming joked. “That’s kind of one of the things, so you know everybody kind of has a different personality to them and different traits. And you know, that kind of just pulled us all together because you know where one person is lacking, one person has confidence so just been able to intertwine everything and you know boost each other up.”

In their first month on campus,Â these young phenoms have been learning what it means play for Ohio State while learning about themselves and their teammates. They’re doing best to carry the weight of the expectations they chose when they committed to the Buckeyes and it’s a weight they’ll carry together.

â€œWe are going to be friends for life, really,” Scott told Lettermen Row. “I feel like weâ€™re going to grow together. Thatâ€™s one of the things Iâ€™m excited about. If I walk into a program that isnâ€™t very good and the talent isnâ€™t really on that level I might be able to have more room to slack. But these guys keep me on my ‘A’ game. Weâ€™re continually pushing each other.â€

The work is only just beginning for those new Buckeyes. But they’ve got a clear vision for where they want to go — together.