That’s what happens when you’re a 5-star prospect with a crazy upside and dominant game film. He’s a must-get recruit for any program in the country. To impress the 6-foot-4, 240-pound edge rusher, there has to be something different.

“He kept bringing up the word ‘investment,'” Abor told Lettermen Row. “He kept telling me ‘I’m not recruiting you, I’m not trying to coach you. I’m making an investment in you.’ And I was trying to figure out what he meant. I asked him what the difference was and he told me ‘Coaching is having you here for three, four years and then I leave and and that’s it. Making an investment in me means he’s there for me to come back to, no matter what. We are investing in you as a person, helping you grow as a person.’

“I’d never had a coach say that. And we just talked a lot about things that weren’t even football. He was super real.”

Keeping it real with Abor meant that Johnson wasn’t going to tell him things just to try and make him feel good.

“I’ve had coaches tell me all the time about how much they want me or need me on their team,” Abor said. “Coach Johnson told that he definitely wants me and thinks he can make me the best player I can become. But he said ‘I’m not going to beg you. I’ve already picked you, I want you to pick us.'” 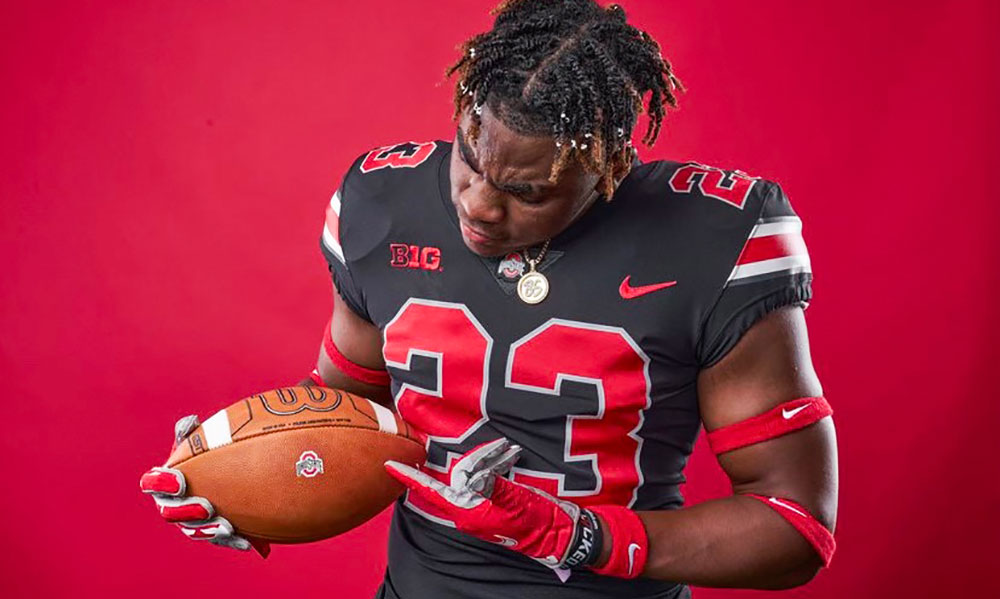 5-star defensive end Omari Abor says he intends to return to Ohio State this fall for a game. (Omari Abor/Courtesy)

“Zach was just telling me that Coach Johnson is the real deal and that he can get me where I need to be,” he said. “And he was talking about the strength and conditioning coach and how much they do to get your body right. That at a place like Ohio State I’ll be able to do things I can’t do now in high school.”

Ryan Day spoke with Abor and his family about the campus at Ohio State. He talked about the fans and the traditions as well.

“Coach Day was real cool,” Omari Abor said. “We had a great talk with him. He talked about the rings and the stadium and the fans, but also about the programs that they have there to help develop players as people. My parents really liked him.

The Buckeyes got the first crack at Abor. He’ll make an official visit to LSU next week and one to Alabama at the end of June. There’s no plan for a decision but he knows he wants to come back to Columbus, a city that surprised him.

“Columbus was big, bigger than I thought,” he said. “Everywhere you went, people were rocking Ohio State gear and wearing the colors. That was really cool to see in a city like that. Everyone was so friendly. I’m trying to come back for the Oregon game.

“Everything around Ohio State was really good for me. Visiting there is of course going to boost up the Buckeyes, but I’ll I’m really thinking is ‘Man, Larry Johnson.'”