Palaie Gaoteote would give Ohio State depth, versatility at linebacker
Aritcle written by:

Have a question about Ohio State recruiting? This is the place for you, five days a week. Submit your questions on Twitter or on the Lettermen Row forums. Check-in daily to see what’s on the mind of Buckeyes fans all over the country. Today’s question is about the Buckeyes pursuit of Palaie Gaoteote, a USC transfer still in the NCAA’s transfer portal.

What chances do the Buckeyes have for landing Kaleb Brown,Omarion Hampton, and Omari Abor? Also how do you think the Buckeyes stand with Palaie Gaoteote?

The Buckeyes have a very good chance at landing Kaleb Brown, Omarion Hampton and Omari Abor, I think. Those three are all in varying points of recruitment, but each of those key targets will visit Ohio State in June. The fact that Abor and Brown will head to Columbus the first week they’re able to is a good sign when it comes to weighing interest and intention, certainly. I don’t do percentages usually, but for now I’ll say I think the Buckeyes are in a prime position as they head into June.

But for now, let’s table those discussions and focus more on Palaie Gaoteote. His recruitment was interesting and his re-recruitment is equally so. The Bishop Gorman (Las Vegas) product was very high on Ohio State back in 2017. Ultimately, he picked USC after considering a late official visit to Ohio State in December. His three-year career with the Trojans didn’t set the world on fire, but he started 14 games for USC and was a steady, consistent player when he was on the field.

The Buckeyes were immediately linked to Gaoteote when he entered the transfer portal. His previous affinity for Ohio State, his close bond with Haskell Garrett and questions about the Buckeyes linebacker depth made it seem like a natural fit. Gaoteote was patient as other recruiting dominoes fell, and when Henry To’o To’o picked Alabama, Ohio State had to decide whether or not renewing the pursuit of the 6-foot-2, 250-pound former 5-star was worth it.

It seems as though they believe it is.

No one wants to upset the chemistry of the current roster by forcing a player from another program into the mix, but that’s one of the areas where GaoteoteÂ may actually make more sense than To’o To’o would have for Ohio State.

The relationship with Garrett is one thing, but the Buckeyes coaching staff knows Gaoteote as well. They recruited him, they know who he is, who his family is and how he would fit in the program. Key veterans on the Ohio State defense, including in the linebacker room, got to know him during his recruitment and at The Opening in the summer of 2017. 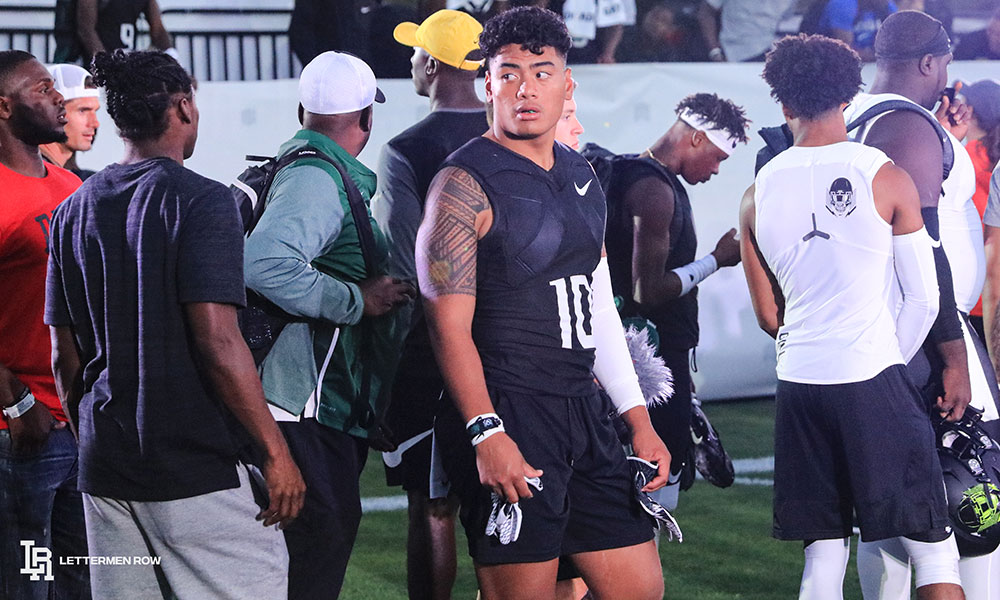 Ohio State was a finalist for Palaie Gaoteote coming out of high school. (Birm/Lettermen Row)

It’s easy to assume because the Buckeyes chased To’o To’o and now another top-ranked linebacker in the portal that there’s unease with the talent on the current roster. That’s not the case, at all. There has to be unease around the current depth, however. It was just a month ago when Ohio State was play long-snapper Roen McCullough at linebacker. He had to fill in during the spring game without ever practicing there.

That’s a concern that needs addressed. No one on the current roster who is healthy fits the role Palaie Gaoteote does.

That’s important to consider as he moves toward a decision. There’s a lack of the big-bodied linebacker with Mitchell Melton unavailable, and Gaoteote can fill that. He’s not as athletic as Malik Harrison or Baron Browning, but that isn’t the role trying to be filled.

To’o To’o was almost certain to be a one-year rental, hired gun-type. Gaoteote has two years of eligibility left to provide depth and situational, formational flexibility.

The fear of attrition can’t dictate roster moves for Ohio State. If a player in the transfer portal can help make the team better, the Buckeyes will go after them. Right now, it seems Ryan Day and Al Washington are weighing the value of Palaie Gaoteote versus any possible ramifications. If there was any doubt about his ability to enhance the defense, bringing him into the Buckeyes program wouldn’t be on the table in the first place.