COLUMBUS — Offseason lists are designed to stimulate conversation, and Ohio State wide receiver Parris Campbell found one that drew him personally and directly into the debate.

But the game-breaking senior figures to do a lot more than just talk about the one that excluded his name.

Anybody with a pair of functioning eyes should already know that Campbell is blessed with top-end speed that few players in the country possess. It also doesn’t take a stopwatch to know that Campbell is one of the most explosive runners in college football, although that does help make his case when observers are apparently clocking him running the 40-yard dash in less than 4.3 seconds.

Regardless, a recent NFL.com countdown of the fastest players in the country didn’t include Campbell, and it didn’t go unnoticed. For a player who has made a mark at Ohio State since the day he walked through the door for his work ethic, now he’s clearly added a little extra fuel to perhaps even shave a couple more hundredths of a second off his times.

#Zone6’s @PCampbell21 strongly feels that he needs to be on everyone’s list for “Fastest Player in College Football.”

“I feel highly disrespected,” the good-natured Campbell said in a video posted by Ohio State. “To make this list, top-18 fastest college football players — and I’m not on the list?

Motivation can come from strange places, and the truth is Campbell probably doesn’t need any more with all the goals already on his plate after deciding to come back to Ohio State for one more season. 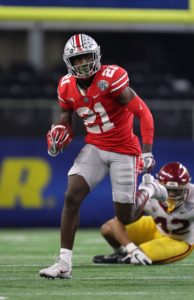 Like the rest of Zone 6, Campbell has been upfront about leaving some plays on the field during his career. He’s already been working to improve his consistency as a wideout, clear about his intentions to help lead the Buckeyes back to another Big Ten championship and establishing himself even more solidly as one of the program’s best leaders.

And none of that should really be impacted by a list that will be forgotten by just about everybody else once the interminable offseason comes to an end and there is actual football to break down. But if it happens to stick in his mind and help him find another gear, maybe Campbell will eventually appreciate the chance to add something else to accomplish this season.

“Personally I just felt like there were some goals that I havenâ€™t met yet,” Campbell said this spring. “The ultimate goal is to win a national title, and I wouldnâ€™t choose anybody else to go do it with.

“But I definitely have a lot of potential that I havenâ€™t even touched yet, and I feel like Ohio State is the best place to develop and push for that. I feel like once this season is over, all of those goals will be met.”

Add one more to the list. And maybe by the end of the year, Campbell’s name will find its way on to the speed countdown as well.