COLUMBUS â€” Ask Pete Werner what his favorite moment of The Game has been before Saturday at noon.

Then ask him after the game.Â Odds are the answer will be different.

Werner made a huge play last season in the end zone of Ohio Stadium when facing Michigan, stripping away a ball from tight end Zach Gentry that would’ve given Michigan an early lead. To that point, it was almost certainly the best play of Werner’s two-year career in The Game.

Following a brilliant 10-tackle, two-pass breakup performance in Ohio State’s win over Penn State last week and that pass break-up last year, Werner seems to be playing his best football at an opportune time to build his legacy against Michigan.

“It was definitely one of the top plays that I consider, especially at the time in the game,” Werner said. “They were getting that momentum, having that play stopped that, led them to a field goal. It made me feel really good.

“It kind of boosted my confidence, and it kind of boosted the motivation for the whole defensive side as [Michigan] was gaining that momentum. I thought it was pretty cool at the time. Especially when I hear the loud atmosphere behind me. It was a great feeling.”

Werner’s from Indiana and never truly understood the rivalry between Ohio State and Michigan before a recruiting visit in 2016. After Curtis Samuel found the end zone in overtime to win The Game for Ohio State, Werner knew he needed to be part of the Buckeyes. As a freshman in 2017, he contributed and had a tackle on kickoff coverage. Last year, his swipe at the ball held Michigan out of the end zone.

He has learned the rivalry quickly, and it appears he’s ready to leave his own mark on it — especially after his performance last week.

“We’ve beat them with preparation in the past, and that’s what showed in the outcome of the game.”

Werner answered the challenge a year ago in The Game. He did it again with his two break ups last week. 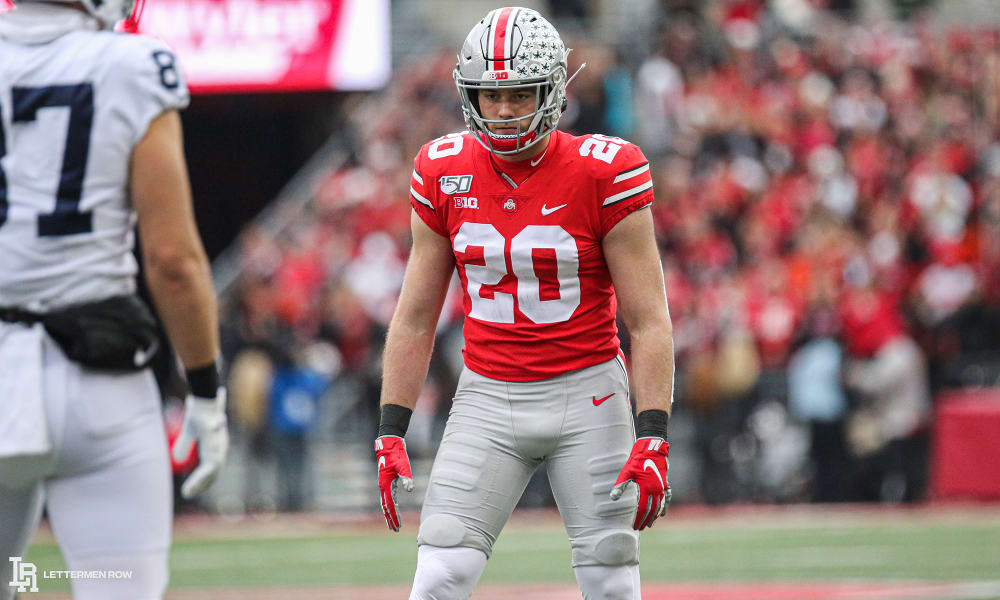 Pete Werner has been a force for Ohio State. (Birm/Lettermen Row)

Maybe that’s not quite the favorable matchup the offenses thought it was.

“I see some formations, and I know the ball is coming to me,” Werner said. “I’m kind of twitched up. I know it’s coming. I see those and I try to take advantage of that, try to make the best play I can. They’ll get some, I’ll get some.

“It’s a great feeling to have that opportunity to go make a play.”

The only difference in last year’s game against Michigan and the one on Saturday? Coming into last year’s game, the Buckeyes gave up 51 points to Maryland a week before hosting Michigan and nearly lost in overtime on the back of a program-worst defense. This season, Ohio State will head to Ann Arbor having held every team this season to 21 points or fewer with the No. 1 total defense in the country.

The Buckeyes weren’t lacking confidence as they prepared for Michigan last year, but it certainly feels different than this year.

“We’re just going out there confident with knowing what we’re going to do to execute our job,” Werner said. “I think the results have shown, and that also boosts our confidence as well, knowing that we have results behind us to show where we are as a defense.”

For Werner, that confidence actually began to grow last year with his vital pass break-up in the end zone that held Michigan to a field goal. It was one of his finest highlights at Ohio State.

“It was up there. I had a big challenge going into the game, and I feel like I executed pretty well,” he said.

That was just a stepping stone for Pete Werner, though.

After a huge performance last week and a season’s worth of confidence, he might just be in line to make another critical play in The Game.