MANHATTAN BEACH, Calif. â€” It’s been a good week at the Elite 11 for Quinn Ewers.

The country’s No. 1-ranked 2022 prospect hasn’t been perfect but he’s been competing, hard. There are incredible, unrealistic expectations attached to everything the 6-foot-3, 205-pound Texan does. Oftentimes the weight of those expectations, and the obligations to entertain discussions around them, can get in the way of just enjoying the truly remarkable experiences that they bring.

So, whether he wins theÂ Elite 11 Finals or not, Ewers is glad for the week he’s had in Southern California. He’s enjoyed the chance to step outside of his comfort zone and has found it valuable, maybe more than he expected to.

“I’ve definitely enjoyed it here,” Ewers told Lettermen Row. “I’ve made a lot of new friendships, even with guys in my own state. I didn’t know [Texas A&M] commit Conner Weigman, this is the first time we’ve met, and we’ve grown pretty closer over the last few days. Overall it’s just been a good time. I’ve met a lot of new people and I enjoy stuff like this.”

By “stuff like this” Ewers means hanging out with his peers and playing football. He genuinely loves that part. He’s been in the public eye for a while though and the part he hasn’t always loved is the obsession other people have with him. The media responsibilities that come with his stature. It’s a piece of the puzzle that kids like Quinn Ewers don’t ask for, but it is still something he’ll always have to deal with. That is something Yogi Roth, Pac-12 analyst and Elite 11 host for the last 12 years, says can’t be avoided.

“A lot of these guys are trying to live up to a role that has been predefined for them,” Roth said. “They get into an event like this and it’s ‘Hey, I’m supposed to be a top quarterback in my state or I’m going to this big school,’ and they really just want to be themselves. Quinn blew up on social media years ago, but he didn’t ask for it. He didn’t want it. Quinn just wants to play football. Kids like him are 16, 17-years old. They’re trying to find their own path.” 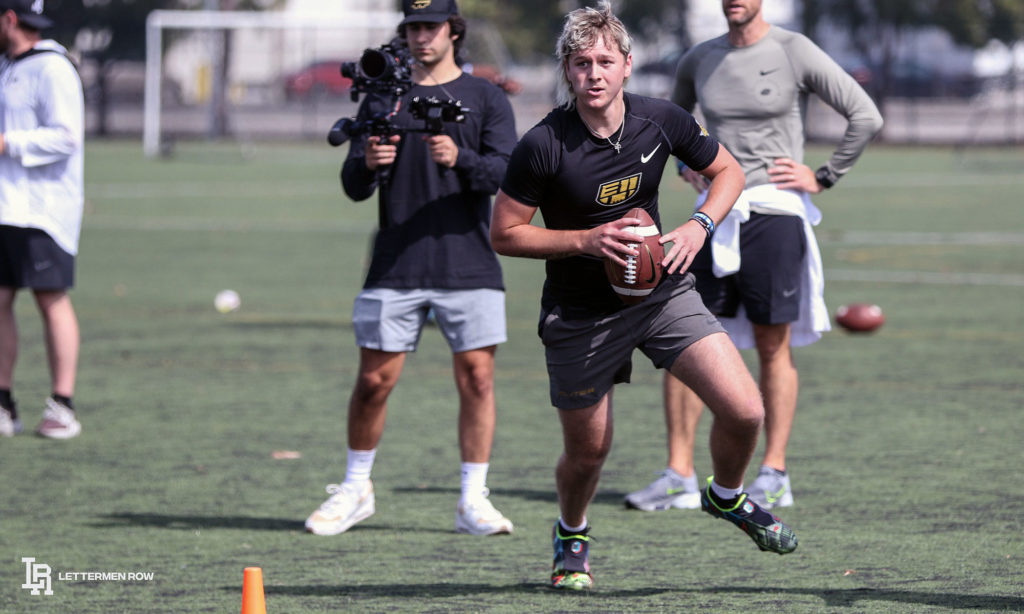 And a lot of times, it takes a push to find that path. For Ewers, there’s been growth in California. It’s come from the way he and his peers have been able to learn from each other, to support each other. Football is a team game, more than almost any other, and it’s easy to retreat into a team, or a school. It may not always beÂ best though, and this week has provided a path for something else.

“I think this competition is really good in that regard,” Roth said. “Quinn has to look around, to his right and to his left, and the guys around him and behind him are really good. We teach our guys about the word compete before anything else when they get here. The current definition reads to strive against, but that’s not root of the word. The root of the word is to strive together.

“And that’s what I’ve seen from him and these other guys. They’ve really united. That’s why yesterday was so powerful to see them, locking arms, in and out of the ocean. Football is such an individualistic sport perceptually but quarterback is the most dependent position in sports. That’s why the theme of this year is connect. So to someone who maybe wants to be disconnected because they’re such a big deal in recruiting — and have so big a spotlight in their area? I think hopefully they walk out and say, ‘I’ve got flip it. I’ve got to connect even more to my community, to my teammates, to my peers.’ That’s gonna make it a better experience.”

Quinn Ewers has done that, maybe more than ever before.

“It’s been good getting out of my comfort zone, like I’ve been doing pretty much this entire week,” Ewers said. “I know I’m going to have to do more stuff like this. More talking to the media, whether it’s press conferences or post-game interviews and stuff like that. It’s going to be important.”

It’s been a good week for Ewers. Now there’s just one thing to make it better: win the Elite 11 and win the 7-on-7 championship.

“Winning on Saturday is also going to be important,” he said. “I’m a pretty competitive person. I want to come out on top.”

Win or lose in that competition, Quinn Ewers got better this week. That makes it a good week for the future of Ohio State football, too.