The speculation, debate and conversations about Ohio State never end, and Lettermen Row is always ready to dive into the discussions. All week long, senior writer Austin Ward will field topics about the Buckeyes submitted by readers and break down anything that’s on the minds of the Best Damn Fans in the Land. Have a question that needs to be tackled, like the one today about Ohio State and theÂ biggest threat to its Big Ten dominance? Send it in right here — and check back daily for the answers.

Biggest B10 threat to the Bucks this year

It’s not going to add another drill to complement Team Up North Period during workouts or assign another moniker to a program so it doesn’t have to call it by its name.

The Buckeyes only have one true nemesis, and there is only one week on the schedule that is worthy of simply being called The Game.

Penn State is certainly a notch below Michigan when it comes to being labeled a rivalry, and that’s not going to change. But when it comes to the most competitive series and establishing which program is truly the biggest threat to Ohio State’s reign of dominance in the Big Ten, the Nittany Lions have clearly surpassed the Wolverines.

The bragging rights and Gold Pants might be what the Buckeyes want to win most every year. But if they’re going to keep wearing the conference crown or earn another spot in the College Football Playoff, the team they needÂ to beat most is Penn State.

Nobody in the league is recruiting at anywhere near the level of Ohio State right now. But Penn State is the closest, and obviously it takes a stockpile of talent to win titles. Yes, upsets do happen in small samples and both Purdue and Iowa have shown that the Buckeyes aren’t invincible. But building a consistent winner takes high-level recruiting, and James Franklin has made it clear that he knows what he’s doing in that department. 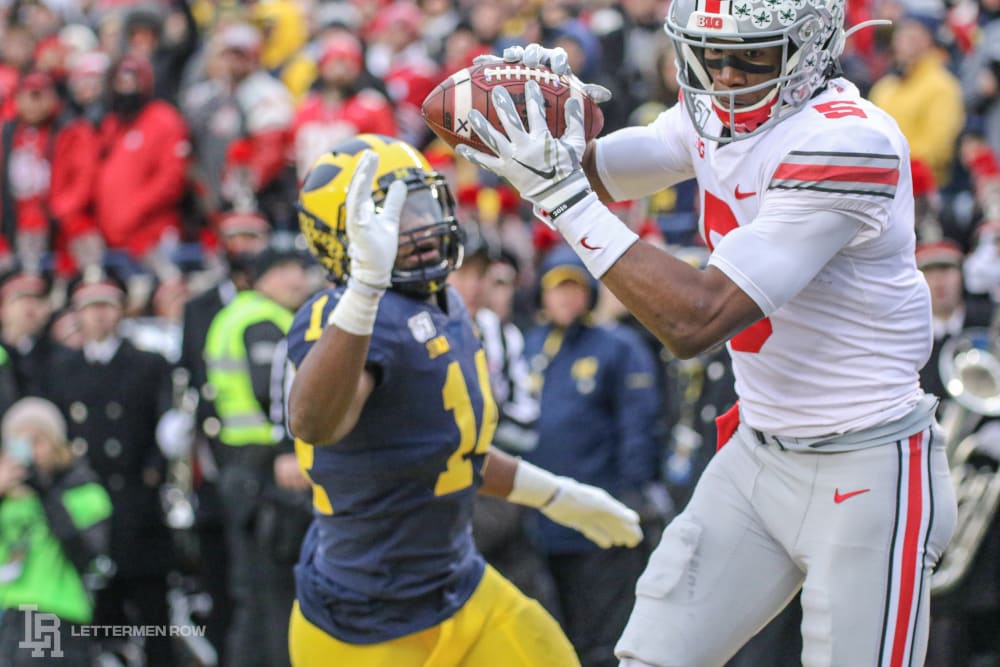 Ohio State and Garrett Wilson claimed a win over Michigan to extend the streak in The Game. (Birm/Lettermen Row)

If Franklin was even a slightly proficient game manager on the sideline, Penn State might already have a couple more signature wins in the series and the Buckeyes might not have won three straight Big Ten titles. That and some misfires in molding a coaching staff might be the only real weaknesses for the Nittany Lions as challengers for the Buckeyes, which again elevates them over the Wolverines.

Michigan has those same issues under Jim Harbaugh, but that’s just scratching the surface of problems that have been exposed in big games — most notably against the Buckeyes. Until the Wolverines can get productive quarterback play, find a way to kickstart the development of a roster that still has NFL talent dotting it and make schematic adjustments to fit the personnel, all they can really hope is that Ohio State regresses. That isn’t likely to happen any time soon, and it doesn’t qualify as much of a plan anyway.

Wisconsin has emerged as the class of the West, and Minnesota is an intriguing program on the rise. But the balance of power still heavily favors the East thanks to Ohio State, Michigan and Penn State.

And while Penn State might be the third wheel in the rivalry discussion, there’s really no doubt that it has taken over the second spot in the Big Ten pecking order.