The speculation, debate and conversations about Ohio State never end, and Lettermen Row is always ready to dive into the discussions. All week long, senior writer Austin Ward will field topics about the Buckeyes submitted by readers and break down anything that’s on the minds of the Best Damn Fans in the Land. Have a question that needs to be tackled, like the one today about Ryan Day? Send it in right here — and check back daily for the answers.

Based on what you have seen so far would you say the training camp has been at the same intensity as a Urban training camp?

Between the lines on the practice field, Ohio State is intense as it has ever been.

If there’s any change for the program right now in the early stages of the coaching transition, that’s only really noticeable when the work is done.

Few people anywhere can hope to match the relentless, fiery intensity of Urban Meyer, and in some ways it would be foolish for Ryan Day to even try since that doesn’t really suit his personality. When Day is locked in during meetings, teaching the game or increasingly finding his way all around the indoor facility this spring to monitor every position instead of just the quarterbacks, he can absolutely get serious in a hurry. There has been nothing missing from the motivational side when the Buckeyes have gone through their workouts in March and April, and they look exactly like the program has grown accustomed to over the last few years.

But that doesn’t mean Day has simply tried to copy and paste everything from the previous era. 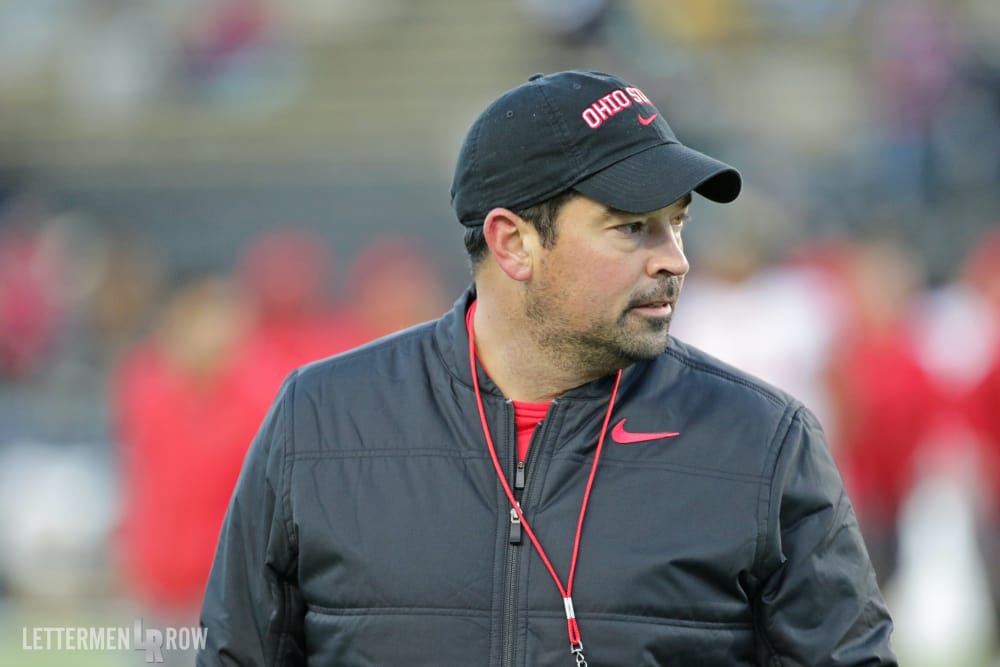 Ohio State coach Ryan Day is all business on the practice field for the Buckeyes. (Birm/Lettermen Row)

There have been a couple times this spring where the schedule has changed or Ohio State has wrapped up its work a little early. And that kind of flexibility wasn’t really a part of the Meyer playbook, although it can certainly be a good thing for this current roster which is dealing with injuries at a couple key positions. It can also be viewed as a reward for the players for a job well done, since there’s no point in continuing to just keep cranking out reps if they’ve already accomplished what Day was looking for in a given practice.

The relaxed media policy, of course, is also a notable change. There are a number of benefits for that aside from simply helping the people that cover the team and providing more information for a fan base starving to learn about the Buckeyes. There is always pressure to compete and perform for the coaches and put productive reps on film, but practicing in front of even a slightly larger crowd can raise the stakes — and it also is a bit more like an NFL-style training camp, which is no surprise given that Day and guys like Jeff Hafley and Greg Mattison have worked at the next level.

But for the most part, the laidback approach really shows up when the Buckeyes take the pads off. Day has long been lauded as a recruiter because of his ability to relate to players, and that doesn’t appear to have changed one bit now that he’s in the big office. Ohio State is still going to do the Circle Drill for toughness, it’s still got Winner/Loser practices with a running score keeping track of every snap and the amount of talent being developed is still unmatched in the Big Ten.

When it’s time for work at Ohio State, it’s business as usual under Ryan Day.