The speculation, debate and conversations about Ohio State never end, and Lettermen Row is always ready to dive into the discussions. All week long, senior writer Austin Ward will field topics about the Buckeyes submitted by readers and break down anything that’s on the minds of the Best Damn Fans in the Land. Have a question that needs to be tackled, like the one today about Ohio State and the pending move of Steele Chambers as part of Linebackers Week? Send it in right here — and check back daily for the answers.

The fit was so perfect for both Steele Chambers and Ohio State, it was hard to view it as anything but inevitable.

Now that the decision appears to have been completely made, the only real question is: What took so long?

The Buckeyes had been having internal discussions about the benefits of Chambers moving to linebacker dating back to the winter offseason program. Teammates were watching his high-school highlight reel and seeing a game-changing weapon on defense, a guy with two years of experience playing at safety and a couple more in the box at linebacker. Just about everybody could already see how steep the climb was going to be to earn carries in a loaded backfield, particularly after some of the ball-security struggles for Chambers last season. And the need couldn’t have been more clear for the Silver Bullets when a long-snapper was pressed into action just so the Buckeyes would have enough linebackers for the spring game.

Now, Ohio State isn’t going to force a position change on anybody, because the chances of success drop dramatically if the player isn’t on board. So, if Chambers wanted to give it one last shot on offense in the backfield during March and April, certainly he was entitled to do so — though it did perhaps come at the expense of getting a head start at his transition over to linebacker, where he’s been hanging out all summer with the Buckeyes. 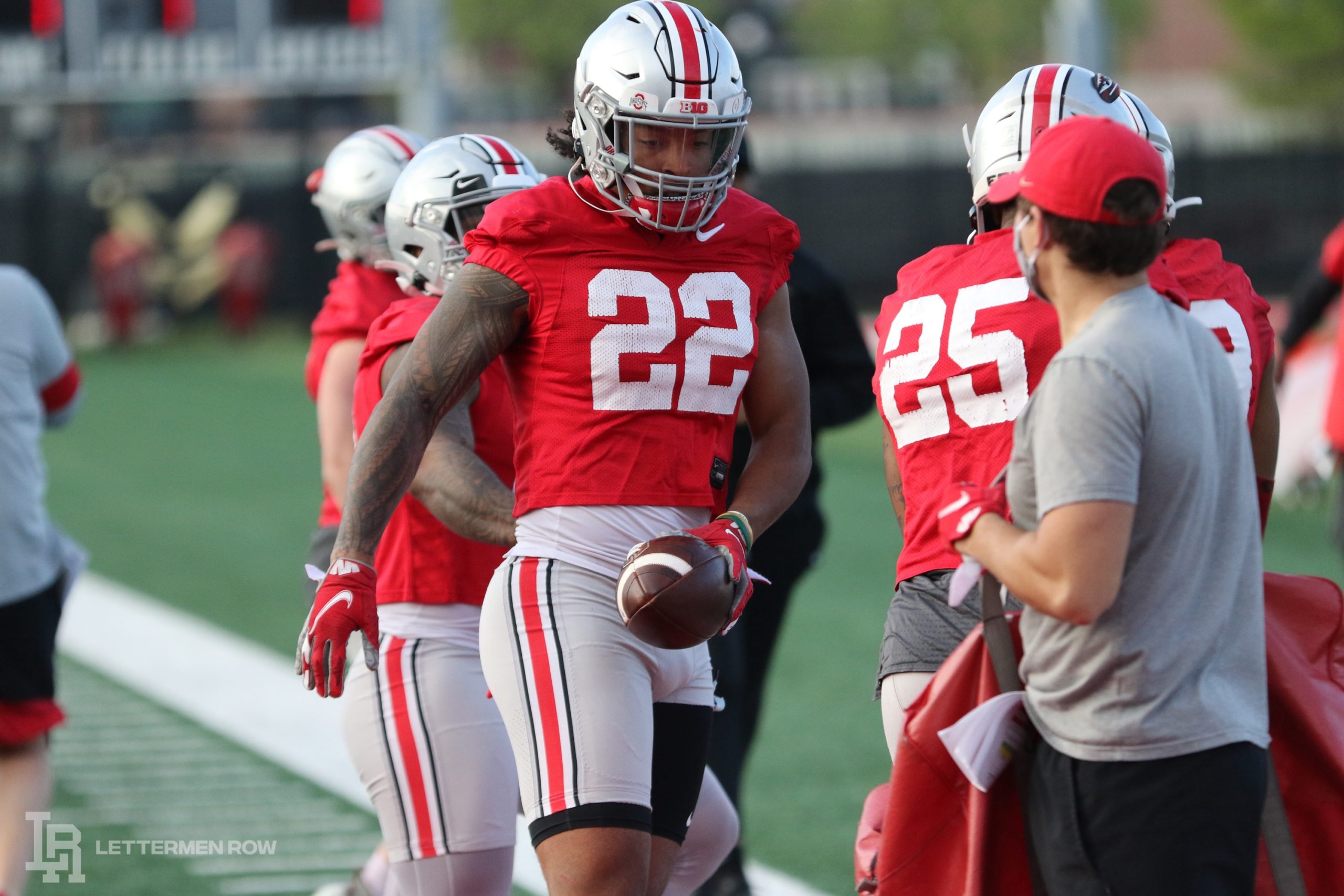 Ohio State can get contributions from Steele Chambers on either side of the ball. (Birm/Lettermen Row)

Either way, his summer-camp experience working alongside linebackers coach Al Washington and his social-media presence with the unit on Monday night have made it clear where Chambers is heading. And his potential ability to make an impact for Ohio State just shot up dramatically, right along with his professional stock at a position that seems perfect for his blend of physicality and mobility.

“That year [2018] in the state championship, we lost our middle linebacker, JD Bertrand — he actually signed with Notre Dame — and we lost him in the semifinals,â€ Blessed Trinity Catholic coach Tim McFarlin once toldÂ Lettermen Row. â€œSteele made the move to essentially our middle linebacker spot sitting in the middle of box, calling our defense.

“I thought that was huge. You play an opponent as good as Cartersville, Trevor Lawrenceâ€™s school, you play them, you lose your main guy, the play-caller on defense, and then you replace him with a guy like Steele? It gave us comfort. … Our defensive coordinator, John Thompson, we have always said Steele is one of the very few guys who could step into college football and play on either side.”

Maybe at almost any other program, Chambers could have stuck around in the offensive backfield and blossomed into a star. That wasn’t likely to happen for the Buckeyes with Miyan Williams, Marcus Crowley and Master Teague all returning and five-star prospect TreVeyon Henderson added to the mix in the spring. But one of the most appealing aspects of recruiting Chambers initially was his positional versatility, and clearly Ohio State wound up with a far more pressing need at linebacker.

For Steele Chambers, that also means a fresh opportunity to contribute for the four-time defending Big Ten champions. Maybe linebacker was where he should have been all along, maybe not.

Either way, he’s got another chance to leave his mark. And he’s never been afraid of the contact required to make one.