The concern used to be that the undersized high school freshman would get hurt.

Now that same kid is an Ohio State senior, and he’s the one dishing out the punishment — even from his spot at wide receiver.

A decadeâ€™s worth of state titles to his name and a career as decorated as virtually any prep coach anywhere, Rick Streiff thought the same exact thing each time Terry McLaurin touched the football when he arrived as a freshman at Indianapolis Cathedral High School.

â€œYou wonâ€™t believe it, but when Terry came to Cathedral he was maybe 5-foot-4 and 120 pounds,â€ Streiff, now Cathedralâ€™s athletics director and the state of Indianaâ€™s all-time leader in state championships, told Lettermen Row. â€œHe was a little dude. He could run, he could absolutely run, but he was a little dude.

â€œItâ€™s been fun for me to watch him go from that little freshman kid, where Iâ€™m saying â€˜Oh my gosh, heâ€™s going to get hurt!â€™ And now he’s become the college player you see today.â€

The player McLaurin is today for No. 3 Ohio State is an example- and tone-setting senior with big-play capabilities who also provides the standard in the classroom, already owning his degree and representing the program as the outstanding student-athlete at last yearâ€™s Cotton Bowl. 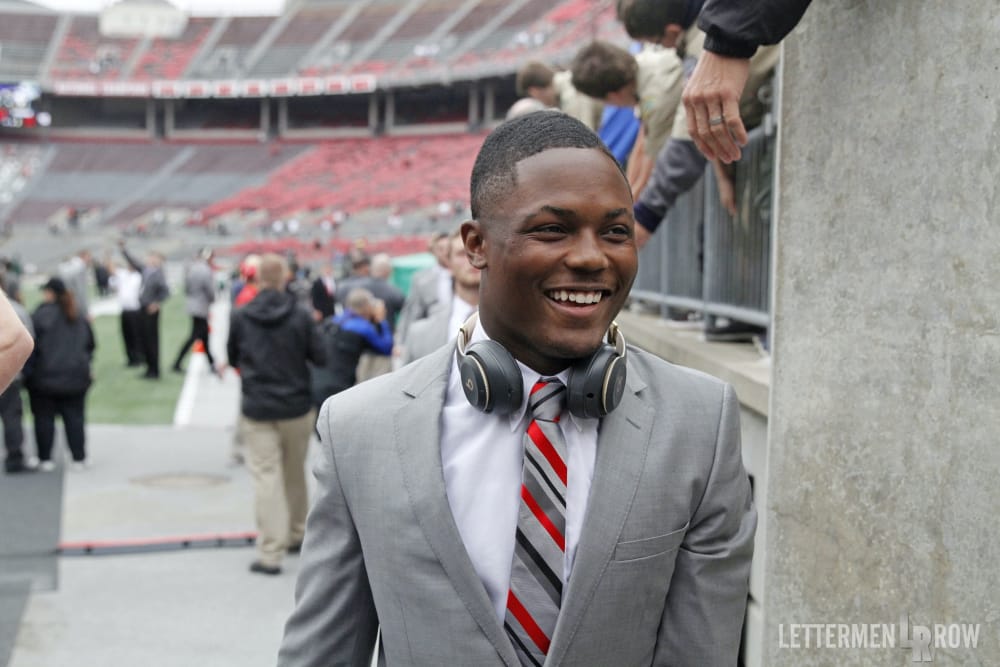 Terry McLaurin has established himself as a leader on and off the field at Ohio State. (Birm/Lettermen Row)

â€œObviously you put in a lot of work to make plays and score touchdowns, and thatâ€™s fulfilling, but making plays like the block and things like that, I feel like that makes you different,â€ McLaurin said days before he springing K.J. Hill for what proved to be the game-winning touchdown at Penn State. â€œThereâ€™s a lot of guys in the country that can score and run and catch touchdowns, but how many can take two on a block on a bubble?â€

The winning sequence against the Nittany Lions hardly is the first time this year in which McLaurin disposed of multiple defenders to set up a teammateâ€™s glory. Invisible in the box score; core program values in the eyes of the coach of the Buckeyes.

â€œWhat’s the culture, what’s the expectation-level of the play here? He’s the epitome right now,â€ Ohio State coach Urban Meyer said after naming McLaurin the offensive player of the week on the heels of the comeback in Happy Valley. â€œOnce again I use the word Evan Spencer around here, I’ve been told I get carried away at times, I do, I get carried away with guys like Terry McLaurin, guys who just go so hard.â€

Going hard is probably the simplest way to explain McLaurin turning into one of the finer players the storied Cathedral program counts among its distinguished alums. Heâ€™s a former Indiana Mr. Football, who as a key contributor for the Buckeyes suddenly is the model of everything that Cathedral wants to see develop in all of its athletes.

â€œHeâ€™s one of those guys, he graduated early, went in and took care of his business,â€ said Streiff, recalling McLaurinâ€™s coming-of-age performance as a junior in the postseason in which McLaurin uncorked a punt return among his multiple touchdowns. â€œHeâ€™s always been that guy; always been one of the hardest workers weâ€™ve ever had around here.

â€œHe came back and spoke to our kids. One time, we had a bunch of kids in the weight room and he came back at Christmastime. I asked if he minded saying a couple words. Of course humble Terry says, â€˜Absolutely. What can I do?â€™ And I just remember he told the guys, â€˜If you donâ€™t get your education, theyâ€™re using you. Donâ€™t let ’em use you. Get your education if you go to college.â€™ He understood how the process worked. Heâ€™s your academic-athletic scholar kind of kid, and thatâ€™s what we really hope at Cathedral that we turn those kind of kids out.â€

Itâ€™s the Terry McLaurin way, blocking out distractions on and off the field in pursuit of a goal.