Ohio State seemed to be on an upward trajectory at the right time. Then it went to Wisconsin.

The Buckeyes, entering the game with a three-game win streak that featured many glimpses of problems from January solved, went in the opposite direction on the road at Wisconsin on Sunday. They struggled to shoot, defend or find any rhythm on either end of the floor in one of their worst losses of the season.

It was going to be difficult to win at Wisconsin. Each team in the league has struggled away from home this season. The inefficient play just made things worse in the Buckeyes 70-57 loss, their first in the month of February, one that is only going to get harder moving forward. After Wisconsin beat them for a second time this season, the only thing Chris Holtmann and the Buckeyes can do is move ahead to a home game against a scrappy Rutgers team on Wednesday night.

This loss will need to be forgotten quickly for the Buckeyes. Before it can be, Lettermen Row is breaking down Three Points from a disappointing outing in Madison.

Ohio State went on a run in the middle of the first half, looked to be playing well enough and had the game tied at 15. then, Buckeyes big man Kaleb Wesson picked up his second foul. The entire game shifted just then. From the time the game was tied at 15, Wisconsin went on a 23-5 run — and a 16-0 within that — to close out the first half. The Buckeyes couldn’t score. The Badgers took confident shots and knocked them down, including eight made 3-pointers in the first half alone. Wisconsin entered the break with an 18-point advantage the Buckeyes just couldn’t recover from. Nearly the entire Badgers run happened with Wesson on the bench. Wesson struggled to find anything offensively all game, shooting 2-11 from the field for only eight points, but the first half was when the game was split open — when Wesson was on the bench. If the Buckeyes are going to make any noise in the Big Ten and NCAA Tournaments, Wesson has to stay out of foul trouble. 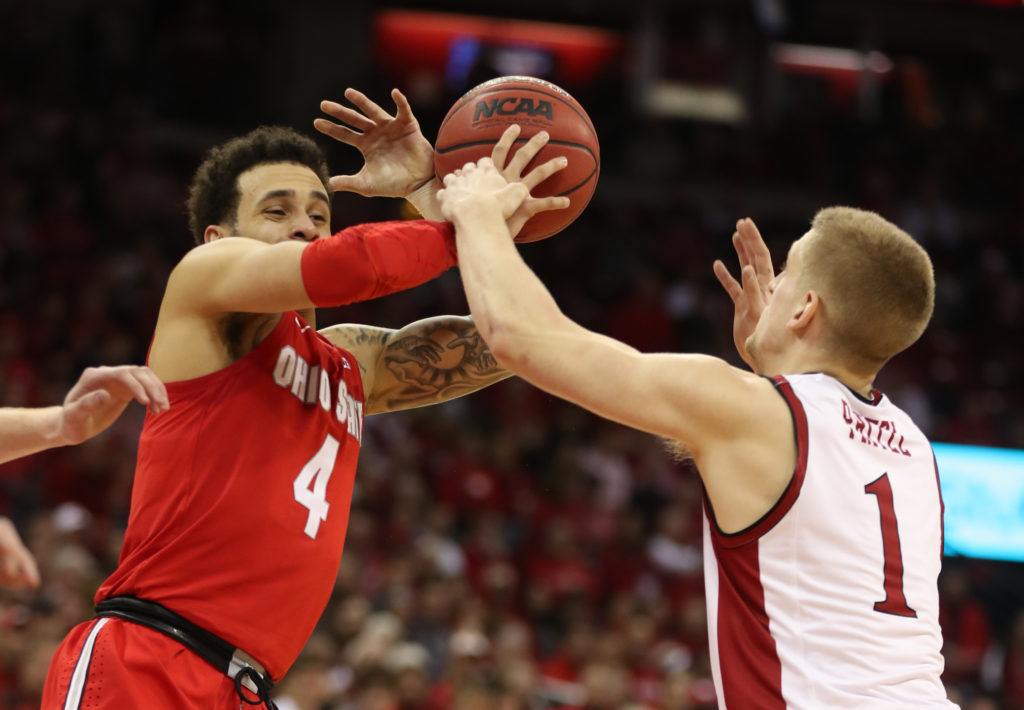 Ohio State has won games this season with a dominant post presence, efficiency and a balanced scoring effort. While Kaleb Wesson struggled in the post all game, the Buckeyes also couldn’t find the balanced scoring, particularly from the bench. Chris Holtmann’s bench was thoroughly outmatched by Wisconsin on Sunday afternoon, being outscored 30-16. Only three Buckeyes bench players scored — Duane Washington had six points while E.J. Liddell had eight and Alonzo Gaffney added two. Badgers reserve guard Brevin Pritzl had 19 points from the bench and hit big shots throughout the game. Ohio State isn’t the deepest team in the Big Ten, but the Buckeyes need their bench in the coming weeks when they take on tough Big Ten opponents. And Sunday wasn’t a sign that the help from the reserves will come.

Turnovers, not assists, show up in Madison

Ohio State started sloppy and turned the ball over too many times early in the game. It continued throughout the game, while assists and scoring output never game. The Buckeyes had 14 turnovers, a telling stat in the narrative of their blowout loss to the Badgers on the road. Ohio State only had seven assists. When they beat Indiana at home and Michigan on the road in the last two games, the Buckeyes spread the ball around and took care of it on the offensive end. That didn’t happen in Madison, and it proved to be costly in one of their worst losses of the season.