The speculation, debate and conversations about Ohio State never end, and Lettermen Row is always ready to dive into the discussions. All week long, senior writer Austin Ward will field topics on the Buckeyes submitted by readers and break down anything that’s on the minds of the Best Damn Fans in the Land. Have a question that needs to be tackled like today’s about Tommy Togiai? Send it in right here — and check back daily for the answers.

What type of hype if any has crept out about Tommy Togiai and do you think that with little playing time this year he can create a similar type of buzz that young has this year? (I think he will, the kid is an animal and worker)

There’s no way to really know if the hype is real until September rolls around at Ohio State. But if the Buckeyes had any interest in keeping the buzz around Tommy Togiai down, they wouldn’t have pulled that black stripe off his helmet during spring camp. That honor counts for a lot in Urban Meyer’s program, and it wouldn’t have happened if Togiai wasn’t already turning heads and playing his way into the talented, crowded rotation on the defensive line.

Ohio State was already confident before he arrived on campus that it had struck gold by prying the 4-star defensive tackle out of Idaho, which isn’t exactly a hotbed of recruiting for the program. The coaching staff clearly knew he was worth the effort, but it’s still probably fair to assume that Togiai has surpassed expectations for the work he’s delivered as an early enrollee. Typically, the interior of the defensive line isn’t a spot where true freshmen are likely to make much of a splash right away, but Togiai is both physically mature at 6-foot-3, 290 pounds and mentally prepared for what the program is asking of him. And that might wind up making him a key part of the rotation in a hurry. 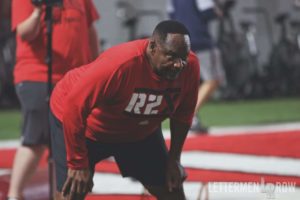 “He [surprised in spring], he really did,” defensive line coach Larry Johnson said. “I saw his video tape and saw him practice and saw what he could do, and then he walked in here and he was everything you hoped to get out of the Cracker Jack box.

“You know, that prize you want to get? It was really cool to see what he is all about. You saw emotion, you saw excitement, and I am tickled to death with where he is at.”

Johnson isn’t usually one for hyperbole. So just like with the ceremonial stripe removal, there are multiple signs pointing to Togiai being a factor for the Buckeyes. The path to playing time still won’t be easy with Dre’Mont Jones and Robert Landers expected to handle much of the load at tackle and Davon Hamilton and Haskell Garrett grinding for work behind them as well. There’s also going to be competition from fellow newcomers Antwuan Jackson and Taron Vincent, and the interior of that Ohio State defensive line is suddenly looking like one of the strengths of the roster.

Togiai is going to play a role in that depth, though like Chase Young at end last season, the number of opportunities to shine might wind up being somewhat limited. But assuming Togiai makes the most of them and stays on this growth curve, the hype certainly isn’t going to die down any time soon.