The Oklahoma graduate transfer had a slow start to the season, not reaching the end zone until early December at Michigan State. But when the Buckeyes needed someone to step up at Lucas Oil Stadium in Indianapolis, Sermon answered the call with a monster game. His 29-carry, 331-yard performance paired with two touchdowns delivered Ohio State its fourth-consecutive conference championship and broke Eddie Georgeâ€™s record for the most rushing yards in a single game.

The showing put Sermon back on NFL draft boards and secured the Buckeyes a berth in the College Football Playoff. He then boosted his draft stock again, this time against Clemson in the Sugar Bowl with 193 yards and a score on the ground on 29 rushes.

By the national championship, Sermon seemed on track for another breakout game. But on his first carry against Alabama, the running back suffered a collarbone injury and never returned. He’s now fully healthy, but the what ifs of what a huge title game could’ve done for his NFL stock remains.

“It was pretty tough,” Sermon said after Ohio State’s Pro Day. “I mean, not being out there on the field. I just know how well I prepared for that game. The biggest game of my life, and I was definitely ready for it. And just getting hurt on that first play — it was pretty tough. But again, I know everything happens for a reason.

“As far as my draft status, I felt like it wasn’t really that significant of an injury for there to be a concern. At the end of the day, all they have to do is just cut on the tape and see me playing at a high level. So, I’m not worried about it at all.”

Sermon’s path to the draft hasn’t been linear. A four-star running back coming out of high school, he picked Oklahoma over offers from the Buckeyes,Â Alabama, Florida and Georgia. A strong freshman year in Norman led to more production as a sophomore, when he nearly rushed for 1,000 yards. With NFL scouts taking notice of the 6-foot, 222-pound back, Sermon’s junior season never took off with only 54 carries before a leg injury held him out.

By then, Oklahoma wasn’t the place for Sermon. In search of a place for more carries and to resurrect his NFL hopes, he picked Ohio State. With the COVID-19 pandemic, he never got a full spring in the Buckeyes system and had a slow start to the 2020 season.Â But by the end of the year, he was averaging 7.5 yards per carry — the best rate of his career. He opted to declare for the NFL Draft, not using the extra year of eligibility given by the NCAA. 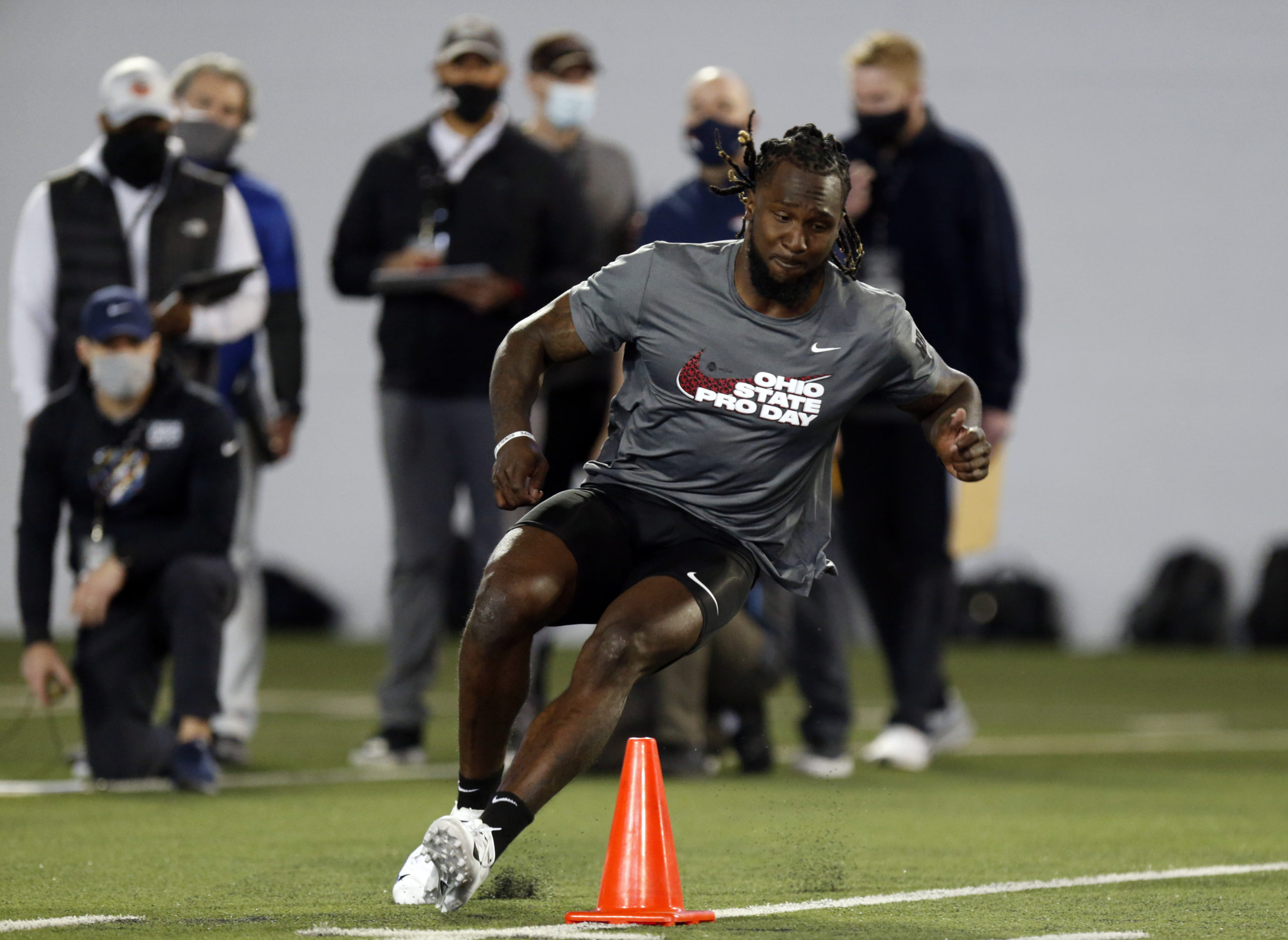 The body of work has Sermon as the fourth-best running back on ESPN draft analyst Mel Kiper Jr.’s big board. HeÂ didn’t run the 40-yard dash time he wanted at Ohio State’s Pro Day in late March, clocking a 4.57-second time. But his three-cone drill made up for it, a 6.83-second time that would have been the best among all running backs at last yearâ€™s combine.

He showed his versatility, too, catching passes from Justin Fields out of the backfield. Most importantly, he showed he’s fully recovered from his injury.

“I mean, it started at the Michigan State game,” Buckeyes coach Ryan Day said after the Clemson game. “That was the first one where he kind of [had] â€” I guess coming-out party is the best way to put it. I think it was where he got his confidence. And then the last two games, heâ€™s been excellent. Heâ€™s been a difference-maker. He really wasnâ€™t early on. I think he was kind of finding his way.

The ability of Trey Sermon to be a plug-and-play player showed at Ohio State, and that’s something he can do for teams in the NFL.