Now the 5-star 2023 prospect says that the Buckeyes are the team to beat in his recruitment.

“I loved everything about them,” Webb told Lettermen Row. “They really made me feel like a priority. They are the team to beat.”

The Buckeyes have done a great job recruiting the Crusaders program in recent years. Shaun Wade, Tyreke Johnson and Marcus Crowley have all made the move from Jacksonville to Ohio State. Crowley helped show the 6-foot, 200-pound athlete around campus on Tuesday.

“Marcus helped me a lot, showing me around,” Webb said. “He talked to me about Coach Alford and how he coaches.”

Those connections are good, but ultimately it’s about coaches for most kids. Tony Alford has known Webb for years and that relationship is stronger than ever.

“He’s known me since the eighth-grade,” Webb said. “Me and Coach Alford are close. He always keeps it cool with me and real with me.” 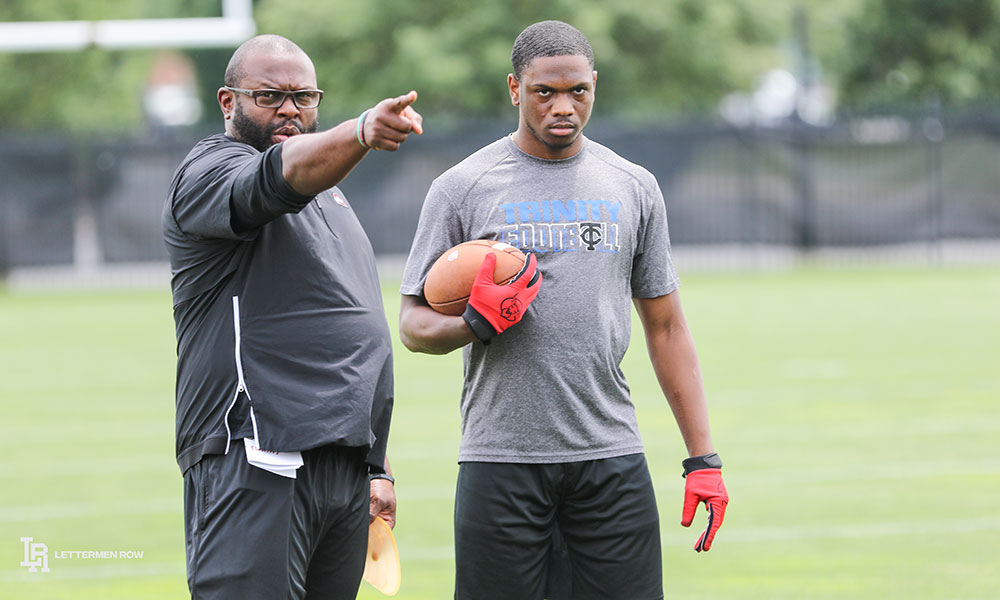 Tony Alford has been directing the Ohio State recruitment of Treyaun Webb, a 5-star athlete from Florida. (Birm/Lettermen Row)

The veteran Ohio State coach and Treyaun Webb spent a lot of time together on Tuesday. Alford jokes with the Florida standout about his conditioning, pushing him to his limit as he worked out for the Buckeyes. After that was over, Webb spent time talking to Ryan Day, and it was that conversation that really separated the Buckeyes for him.

“I havenâ€™t talked to Ryan Day before,” he said. “But he treated me like one of his own. It was a really great family environment and I honestly didn’t want to leave.”

Before leaving — begrudgingly — the former Georgia commit met up with his close friend and fellow Florida 5-star Richard Young. The country’s No. 1-ranked tailback was getting into town right around the hour the No. 4-ranked athlete was departing. They had dinner together with Alford and Webb is now onto the next step of a very busy month.

“I’ve got trips to Clemson, Georgia, Oklahoma and Miami,” he said. “Soon after that I will narrow it down and the top schools will get a official from me, then I’ll make a decision.”

Ohio State is in a good spot heading into these next few pivotal weeks.