INDIANAPOLIS â€” It took a while, but J.T. Tuimoloau is finally an official member of the Ohio State football program.

The 5-star defensive lineman from Eastside Catholic (Sammamish, Wash.) was methodical in making a college decision. Ryan Day, for the first time able to talk about Tuimoloau’s recruitment and signing, made no bones about how different the last two years were.

“It was the most unique recruitment I’ve been a part of,” Day told Lettermen Row on Friday. “But we fell in love with J.T. and his family, with his mom and his dad. Everything about who they are — they’re a great family, and it was just a really unique situation.”

The Covid-19 pandemic hit the United States just three weeks before Tuimoloau, the country’s No. 3-ranked 2021 prospect, was going to make his first visit to Ohio State. That trip, and every other visit he had planned in the spring of 2020, was put on hold. No one could have guessed how long it’d be before some sense of normalcy returned.

For the Buckeyes and the other programs recruiting Tuimoloau, the wait had to be worth it. Ohio State fully understood why the latest addition to the roster had to wait.

“It was just them finally getting a chance to make visits in June,” Day said. “They waited more than a year to see us, to see the other schools they went to. In a normal situation, it wouldn’t have taken that long. The family had to know they were making the right decision for them and deserved to have all the information they needed.” 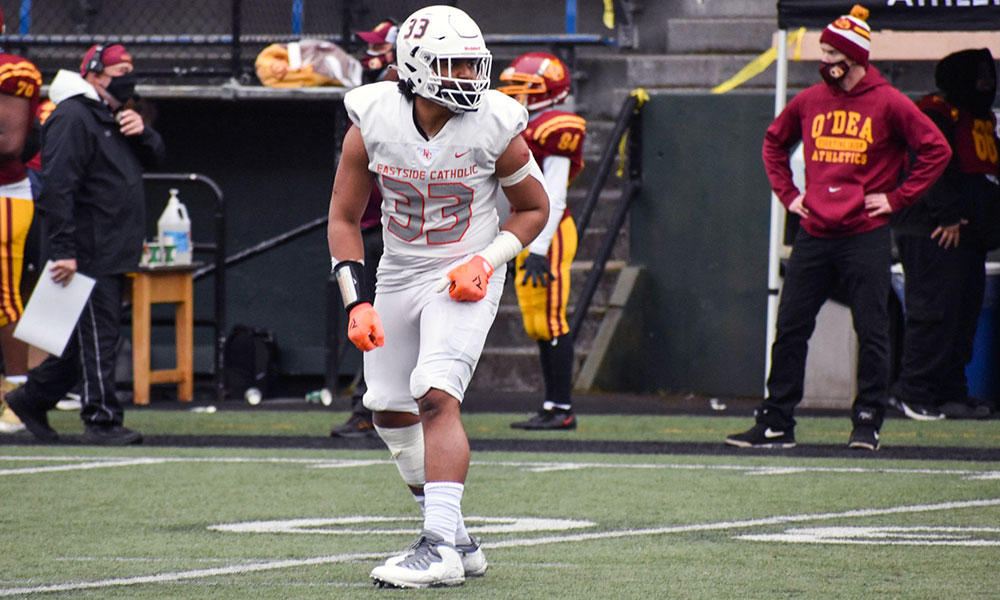 J.T. Tuimoloau has talent that should get him on the field early at Ohio State. (Courtesy 247Sports)

That information resulted in Tuimoloau, a 6-foot-5, 275-pound athletic freak, picking Ohio State. He arrived on campus just one week after his July 4 decision. Day, in and out of the office the past three weeks on his own well-deserved family vacation, was there to meet the family in Columbus.

“I made sure I was there to meet J.T. and his family when they arrived,” Day said. “And it seems like he’s doing great. The times I got to be around him, he was very conscientious, asking a lot of questions. From what I can tell, the guys have really taken to him. They like his personality, and they like who he is. He’s fit in well, and some of the leaders have already begun taking him under their wing.”

Now that the wait for J.T. Tuimoloau is over, the expectations and the hype train can begin. To make an impact for Ohio State this fall, he’ll have some catching up to do.

“We know he fits in with the team,” Day said. “That was the first concern about coming in as late as he did. Now it’s about chemistry and finding a role for him. But he’s got to be physically ready, because there’s a lot that goes into that.

“We will be working with him through the preseason and then see where he’s at in the first game or two. There’s a long way to January. It’s too early for any kind of talk about how he’s looked or anything like that, but he certainly has a lot of ability. He is special.”