COLUMBUS — The wildly successful run for Urban Meyer at Ohio State is on pause.

Just two days before his seventh season in charge of the Buckeyes was set to begin with the start of training camp, Meyer was placed on paid administrative leave following a report that he was aware of a history of domestic abuse allegations against former wide receivers coach Zach Smith.

Despite firing Smith last week and the lack of charges having ever been filed against him, Ohio State is investigating the allegations and how Meyer handled them dating back to 2015. Offensive coordinator Ryan Day will serve as the acting head coach until the matter is resolved.

“[Athletic director Gene Smith] and I agree that being on leave during this inquiry will facilitate its completion,” Meyer said in a school statement. “This allows the team to conduct training camp with minimal distraction. I eagerly look forward to the resolution of this matter.”

Meyer is set to make $7.6 million this year leading the program where he has rewritten the record books at the school where he once got his start in coaching as a graduate assistant.

Meyer has a 73-8 record with the Buckeyes, including a pair of Big Ten titles and a national championship. And thanks to his incredible recruiting success, the establishment of â€œReal Life Wednesdaysâ€ and a clean record with the NCAA, Ohio State had again been built into one of the few, true powerhouses in college football.

But all of that was threatened after Smith was charged with criminal trespassing in July. That relatively minor charge, which was expected to be dismissed according to his lawyer, prompted more digging into the past of Smith. Multiple allegations of domestic abuse coming to light and were initially reported by Brett McMurphy. The grandson of Meyerâ€™s mentor Earle Bruce, Smith never had charges held against him and was never convicted of a crime, but the pattern of violence and Ohio Stateâ€™s continued employment of him eventually brought Meyer and his knowledge of the situation into the equation.

Meyer talked openly about the first situation in 2009 at Florida, but he steadfastly denied any awareness of a subsequent allegation in 2015 at Ohio State when pressed for information after firing Smith last week at Big Ten media days. 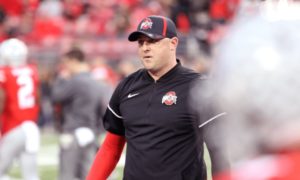 â€œAs I do many times, most coaches and people in leadership positions, you receive a phone call, first thing you do is tell your boss, let the experts do their jobs,â€ Meyer said last week. â€œWeâ€™re certainly not going to investigate. It came back to me that what was reported wasnâ€™t actually what happened. And Shelley and I actually both got involved because of our relationship with that family and advised for counseling and wanted to help as we moved forward. And 2015, I got a text late last night something happened in 2015. And there was nothing. Once again, thereâ€™s nothing â€” once again, I donâ€™t know who creates a story like that.

â€œ … I can’t say it didn’t happen, because I wasn’t there. I was never told about anything, [nothing] came to light, never had a conversation about it, so I know nothing about that.”

That denial became harder to believe after Smithâ€™s ex-wife Courtney appeared in a videotaped interview on the website Stadium on Wednesday. Courtney Smith shared text messages with Meyerâ€™s wife Shelley that suggested that information should have been known in the Woody Hayes Athletic Center.

Ohio State officials will now begin looking into the issue is well. And while Meyer ultimately did fire Smith, if the school didnâ€™t believe he did it in a timely fashion, there could be more punishments on the way.

Until then, the Buckeyes will be moving ahead without Urban Meyer.