The speculation, debate and conversations about Ohio State never end, and Lettermen Row is always ready to dive into the discussions. All week long, senior writer Austin Ward will field topics on the Buckeyes submitted by readers and break down anything that’s on the minds of the Best Damn Fans in the Land. Have a question that needs to be tackled, like the one today on Urban Meyer and hitting the fast-forward button at Ohio State? Send it in right here — and check back daily for the answers.

Is time travel possible to get past this investigation and to the first game of the season?? pic.twitter.com/j81TKnQ9Dq

After making it this far and dealing with what has felt like a year’s worth of drama instead of just a month, why skip past the conclusion now? Obviously it’s been a relief every time there’s been a chance to actually break down football and one of the most fascinating Ohio State teams in recent memory. But those chances have been few and far between thanks to the media blackout on the Buckeyes and the scorching spotlight that has left on the Urban Meyer investigation — and a bunch of details that have absolutely nothing to do with it at all. Now that the process is drawing to a close, it would almost be disappointing to skip past the resolution that should come in the next two days when there will finally be actual facts to digest instead of speculation.

Of course, until then the rumors are only going to keep flying. So, based on what Lettermen Row knows now, what’s the likely outcome here?

The Columbus Dispatch cited two sources floating a recommendation to the Board of Trustees that Meyer will face a suspension, including one that could be applied retroactively since he’s missed all of training camp thus far. That would potentially clear him to return in time for the opener against Oregon State on Sept. 1. There are other reports suggesting Meyer would push back on a suspension, but that shouldn’t make any real difference since he won’t get to decide his own punishment — if there is any at all moving forward. 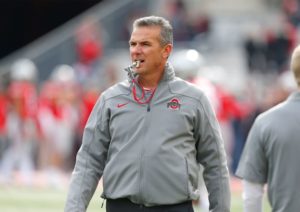 Urban Meyer has been on paid administrative leave for all of training camp at Ohio State. (Joe Maiorana/USA TODAY Sports)

Nothing Lettermen Row has been told recently indicates that Meyer is in danger of being fired. Some of those discussions were premature since the investigation was ongoing, but nothing has changed at this point heading into Wednesday’s executive session, which likely means there wasn’t any damning evidence against Meyer found during the two-week, fact-finding mission by the independent panel. That doesn’t guarantee that Ohio State president Michael Drake will keep the seventh-year coach on board. But if Meyer was found to have followed the proper protocol, it’s difficult to imagine and potentially ridiculously expensive for the school to part ways with him.

Assuming all that is true, that leaves the matter up to settling on a return date. Meyer has been getting paid for the entire month while absent from the team, but he still almost certainly feels like he’s been suspended already given the importance of training camp for him. And if Ohio State winds up with information that clears him for a return to the sideline at the Horseshoe, it’s fair to wonder what any additional discipline would actually be for at this point. Again, that’s why the report, the investigation and the facts are so important, and the Buckeyes will certainly owe the public a thorough explanation if that time comes.

Fortunately, decision day is almost here. And the guess from here is that barring a surprise, Urban Meyer will be back with the Buckeyes in time for the first kickoff of the season.