COLUMBUS — There can be no serious accusation that Ohio State didn’t mean business with Urban Meyer.

Even before it handed down a three-game suspension to a three-time national champion, the Buckeyes had put him on the sideline for all of training camp. They spent a reported $500,000 to finance an independent investigation into what he knew about former wide receivers coach Zach Smith, when he knew it and what he did with that information. After a thorough, two-week investigation that included more than 40 interviews with witnesses, 60,000 emails and 10,000 text messages and more salacious details than anybody could have ever imagined, the Board of Trustees then spent almost 12 hours debating Meyer’s future.

The scope of the investigation and those numbers are eye-popping. And they also make it hard to completely understand how Ohio State wound up deciding on the specific digit for Meyer’s suspension.

How exactly the Buckeyes arrived at a suspension that will force him to miss the first quarter of the regular season is still unclear even after the somber press conference with school president Michael Drake, athletic director Gene Smith and Meyer on Wednesday night at the Longaberger Alumni House. If the school still has enough faith to put the powerhouse football program that serves as the most visible part of the university back in Meyer’s hands, it’s hard to understand the logic for suspending him for the first three weeks of the season.

Either Meyer followed the proper protocol or he didn’t. Either he’s cleared to be the coach again at Ohio State or he shouldn’t ever be on the sideline at the Horseshoe. 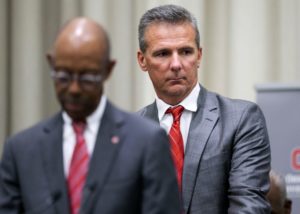 Ohio State instead found something in the middle, and in the process did send a strong message about how seriously it considered the issue. It’s possible that amidst the other ongoing scandals in the athletic department right now, Drake felt there was no choice but to use discipline against Meyer as part of a public relations campaign. Maybe in hindsight when the complete report is made public, that sort of punishment will make more sense — but right now, it’s hard to find the justification for settling on that handful of games on the shelf for Meyer.

“And [a decision] that would lead us to be a stronger university moving forward.”

Is that what Ohio State accomplished?

The review found that Meyer has a “sincere commitment to the Respect for Women core values that he espouses and tries to instill in his players.”

Meyer wasn’t entirely truthful at Big Ten media days, but the report again sides with him that the statements “were not a part of a deliberate cover-up effort to keep Zach Smith on the coaching staff.”

And, once more, it’s important to keep in mind that Zach Smith was never charged with a crime.

It’s beyond obvious by now, though, that Urban Meyer should have moved on from the grandson of his mentor Earle Bruce years ago. Beyond some of the off-the-field concerns that should have been blipping much louder on Meyer’s radar, the production of the wide receivers over the last few years rarely ever suggested that Zach Smith wasn’t much more than an average position coach who could have easily been replaced. In fact, with Brian Hartline waiting in the Woody Hayes Athletic Center, Ohio State only needed one day to find somebody who already appears to be an upgrade.

Urban Meyer is going to be the coach again at Ohio State. And if he’s going to be back in charge in such a high-profile position, it’s a bit puzzling that it’s even bothering with a delay.