COLUMBUS — Urban Meyer is cleared to return, and his record-setting run at Ohio State is now ready to resume after a three-game suspension.

Following the completion of an independent investigation into the seventh-year coach about what he knew about off-the-field allegations against former assistant Zach Smith, when he was made aware of it and how the information was handled, the university reached a verdict on Wednesday after 12 hours of deliberation. And it paved the way for Meyer to get back to work with the Buckeyes, but not without some discipline.

After more than two weeks on paid administrative leave while his team was grinding through training camp without him, Meyer will be on the sideline again in the middle of September with a chance now to add more accomplishments to one of the most impressive bodies of work in college football history.

“[The] handling of this matter did not exhibit the kind of leadership and high standards that we expect,” Ohio State said in a school release before a press conference on Wednesday night.

Meyerâ€™s future with the program appeared to be in some jeopardy when the ordeal began at the start of the month. 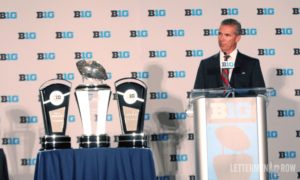 An interview from Smithâ€™s ex-wife Courtney posted on Aug. 1 suggested that Meyer was aware of the allegations of domestic abuse from 2015, which at the time contradicted public statements he made denying knowledge of them in July at Big Ten media days. Ohio State placed Meyer on leave that same day until it could establish the facts of the matter, which at least publicly changed on Aug. 3 when he posted a letter to his Twitter account apologizing for his statements in Chicago — and, more importantly, indicating that he had followed proper protocol.

The saga would only get more bizarre from there, with a nonstop barrage of rumors, speculation and background reporting that rarely even had anything to do with the investigation. While the Smiths and some family members continued to fight a battle in public over the incidents, pieces of the initial reporting were being picked apart for errors on Reddit and arguments played out hourly on social media, Ohio State put together a six-person panel to quietly go about establishing the relevant facts. Throughout that entire stretch, Meyer missed all of Ohio State’s training camp while barred from contact with the program.

Aside from providing one update on the timeline for completing the investigation, the university never addressed the process or offered any updates on the search for the truth until it wrapped up on Wednesday.

But the verdict is in now. And Urban Meyer is coming back to the Buckeyes — just not right away.