COLUMBUS â€” Ryan Day has made the Ohio State policy about COVID-19 cases clear enough too many times.

So when the second-year coach about to coach for his first national title continued to receive questions about the status of players — and his team’s overall availability to play — for Monday night’s national championship game, Day had heard enough.

“How many do we have available?” Day saidÂ during Virtual Media Day on Thursday. “I don’t know the number on that. I’d have to check.

“Yeah, we’ll have plenty of players.”

Of course Ohio State is gearing up to play Alabama in South Florida for the national title. The Woody Hayes Athletic Center has stayed open all week as the Big Ten champs continue to practice in preparation for the Crimson Tide. There certainly have been positive COVID-19 cases in the building over the last six weeks, but they haven’t been enough to sideline the entire program or halt preparations for the title game.

The Buckeyes are going to be ready for Monday night. End of that line of questioning.

Ryan Day and the Ohio State offensive star-power took questions during Virtual Media Day ahead of the title game against Alabama, and Lettermen Row is breaking down What We Learned from those conversations with the Sugar Bowl champs. 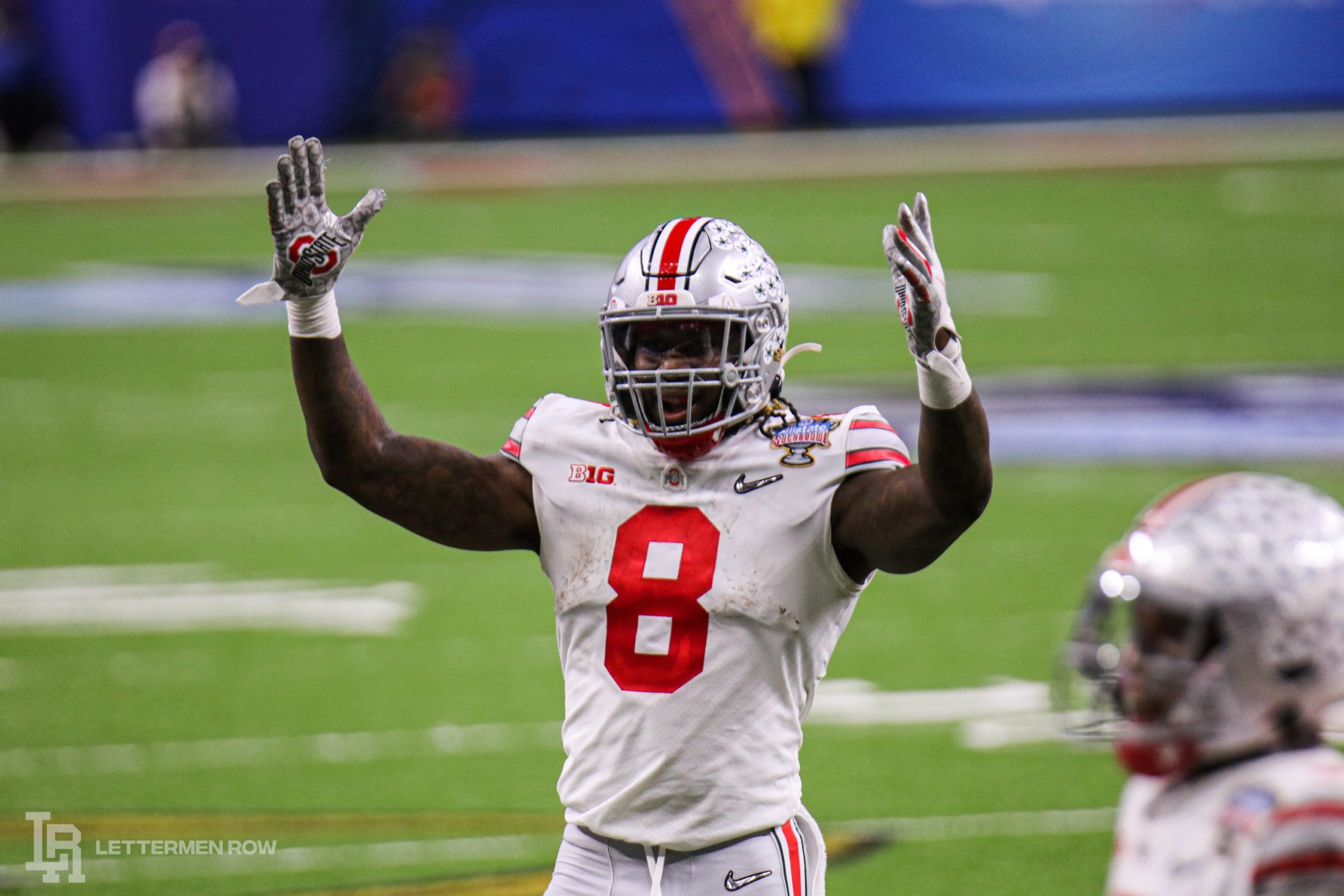 Trey Sermon didn’t have the start to the season he wanted, but it certainly has gotten better since his midseason breakout at Michigan State.

Sermon began the season as the backup running back; now he’s running through defenses with ease and is being compared the the postseason stretch Ezekiel Elliott had in the 2014 College Football Playoff national title run. Sermon has hit another gear with more than 500 rushing yards in the last two games.

But he’s also finding ways to make an impact out of the backfield as a check down receiver for Justin Fields. And those catches have become just as important to the Buckeyes offense as Sermon’s violent running.

“I mean, I feel like we work on it quite a bit,” Sermon said. “I mean, even during periods in practice. If nothing is there, then he’ll check it down. It’s something that we just kind of work on like every day. It just happens. In the game it just worked out well because I would get out there and just kind of be uncovered or just the easy check-down, and just being able to just get vertical and just have a positive play.”

Tight ends thrilled to have breakout in Sugar Bowl

Maybe Ryan Day and Kevin Wilson were just saving the tight ends for when they needed them the most. Ohio State barely ever throws to its tight ends. But against Clemson in the Sugar Bowl, Jeremy Ruckert and Luke Farrell erupted for three touchdown grabs and had an incredible night in the blocking game, too.

It was a nice reminder for the tight ends of how versatile they can be in the offense, especially in a high-pressure game like the Sugar Bowl or national title game.

“No, that’s really how the game works out as the game goes along,” tight end Luke Farrell said. “You get your opportunities in practice, and just whether it’s going to work out coverage-wise, where you’re at in the game, what gets called. I mean, we couldn’t be happier. I don’t know what more we would want, dominating the blocking, three touchdowns for the tight end unit, so that was great.”

And maybe Day and Wilson have more to show with their tight ends in the title game. 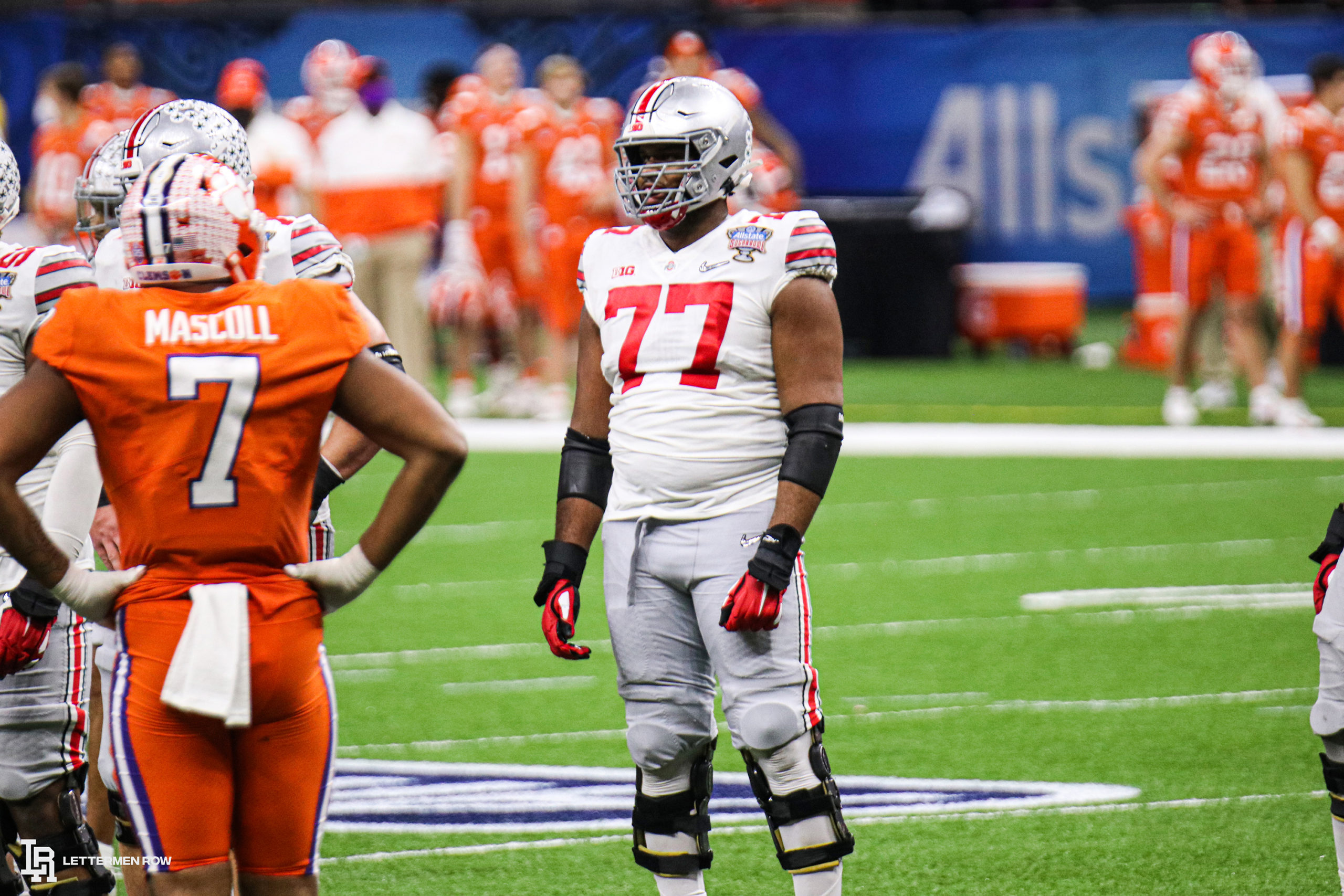 Paris Johnson had to step into the Ohio State lineup in the Sugar Bowl. (Birm/Lettermen Row)

Paris Johnson Jr. was always going to have a high bar to clear at Ohio State. The No. 1 offensive lineman in the country from the class of 2020, Johnson competed for the starting right tackle spot this fall and has come in at times in a backup role for the Buckeyes.

But he certainly seems to be gaining steam as he prepares to head into his first full offseason — and likely into the starting lineup for next year. The expectations are high for the freshman from Cincinnati, who filled in at both guard spots for spurts of the Sugar Bowl win over Clemson.

“Paris is an extremely talented football player and offensive lineman,” Ohio State center and Rimington Trophy finalist Josh Myers said. “He has the right skill set. He has what God has given him, and God has given him a lot. And he also has the mindset. I don’t know if I should say this or not because it’s pretty early on in Paris’ career — but in my personal opinion, if Paris isn’t an Outland Trophy winner before he leaves here, then he’s screwed something up, because he should be by the time he leaves. In my opinion.

“He’s that talented. So, yeah, he’s a ball player, man. He’s good. I think he could step in pretty much anywhere on the offensive line and be just fine.”

Those are high expectations for a freshman offensive tackle. But Johnson is skilled enough to live up to them.

Justin Fields will be good to go for Buckeyes

Of course, Justin Fields was likely expecting to be asked about his status for Monday night’s title game after the hit he took and the pain he was in following the Sugar Bowl.

But Fields, who has been practicing this week in preparation for the title game, kept it short and simple when asked about his health for the clash with Alabama.

“I’ll be good by Monday night,” he said.

Fields seemed to be fine in the second half of the Sugar Bowl when he was heaving the football nearly 60 yards for touchdown passes. And with a healthy Justin Fields next week, the Buckeyes have a better chance to capture another national title.

Wyatt Davis glad to have returned from opting out

Now, he’s just one win away from winning the national championship he came back for.

“It’s huge,” he said. “I mean, there were guys on my team after the Clemson game messing with me about it, saying: ‘Wow, you would have chose to sit out and miss out on this.’ It’s honestly crazy just how everything that I wanted to happen this season is happening.

“Now we just have to go finish.”

Davis nearly wasn’t even a part of the Buckeyes crazy pandemic-shortened season. Now, he’s helping lead them into the national championship game.