COLUMBUS â€” Tony Alford has plenty to sort through in the next three weeks before Ohio State opens its season.

The running backs coach has worked with plenty of high-end talent with the Buckeyes and just coached his first 2,000-yard rusher in program history. But that also means this season he is tasked with replacing more than 2,000 rushing yards.

Alford has two capable backs to get the job done. Master Teague and Trey Sermon could both be dynamic weapons for the Buckeyes offense. Teague was seventh in rushing yards in the Big Ten last season — as a backup. Sermon has 25 career touchdowns from his time at Oklahoma and has shown how explosive he can be.

It’s a good problem to have. And it’s one Tony Alford is sorting through as the season draws near.

“I have a pretty good idea of what it’s probably going to look like, but a lot of it just depends on consistency in practices, the things that the game plan lends itself to and how those guys fit in it,” Alford said. “I have an idea, but that’ll iron itself out in the next couple weeks.”

The addition of Sermon in April certainly made the position, which looked to be dangerously thin after spring practice, more intriguing. And the possibility of Teague and Sermon together in the backfield is now a reality for the nine-game Big Ten slate.

The Buckeyes running backs met with the media Tuesday to break down the position and how it might shake out. Lettermen Row has more of What We Learned from Alford and the tailbacks.

Trey Sermon left Oklahoma and entered the transfer portal at the beginning of the pandemic shutdown. He committed to the Buckeyes in April, when nobody could meet in person at Ohio State. He’s only been with the
Buckeyes since the summer.

That hasn’t slowed down the running back who is transitioning from one College Football Playoff-caliber program to another this offseason. Sermon is picking everything up just fine at Ohio State.

“The way he attacked the playbook was impressive,” Alford said. “He has the ability to attain information very, very quickly, then to transfer the information onto the field from the meeting room. That’s probably been the biggest thing from me that was the most impressive thing coming in: His ability to understand our whole offense and where he fits into the plans. He spent countless hours, we spent countless hours together, he’d come out to the house and we would just go over stuff. He’s always on a quest for knowledge.”

Maybe it wasn’t so difficult to go from one prolific offense under a young, offensive-minded head coach to another in just a matter of months. The schemes are similar enough, and Sermon fits right into what the Buckeyes want to do offensively.

“The system is kind of the same as Oklahoma,” Sermon said. “They throw the ball a lot to the running backs, they have a great run scheme. I just feel like it would be the best fit for me.” 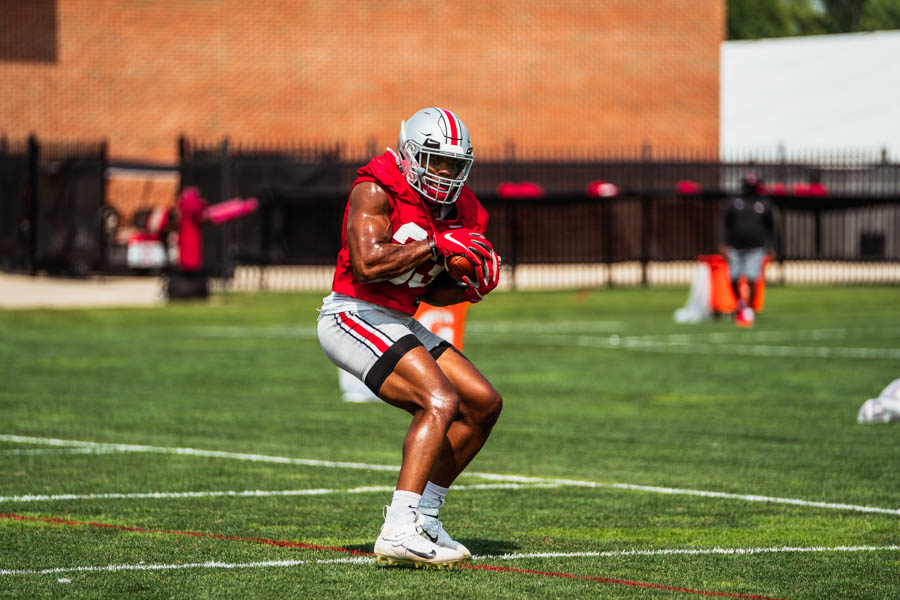 Master Teague is back on the Ohio State practice field. (Courtesy/Ohio State Dept. of Athletics)

When Master Teague went down during spring practice with an achilles injury in March, his status for the beginning of the season, scheduled for Sept. 5 at the time, was uncertain. He believes he would have been ready.

“I feel like I would have been ready to go, to be honest, if we would have started at the regular time,â€ TeagueÂ said.

But that point is moot. Once the season got pushed back to mid-October and training camp until late September, Teague was then fully expected to be ready for the season-opener. And he feels as good as he can heading into another Big Ten and national title run.

â€œRight now, thereâ€™s nothing [limiting] with the Achilles,” he said. “Just getting used to playing ball again and the physical aspect again. Iâ€™ve been feeling good, no worries.â€

Of course, Sermon is coming back from an injury himself. And if the Buckeyes can have a healthy Master Teague alongside a healthy Trey Sermon, it’ll be hard to stop the Buckeyes offense.

After the two-headed monster that is Trey Sermon and Master Teague, the Buckeyes have options for another backup role.

Steele Chambers has the skill and ferocious running style that lends itself to picking up yardage in the Big Ten. Marcus Crowley could be an option whenever he is fully recovered from an ACL injury last November.

And then there’s a former walk-on journeyman who has spent time at defensive back and wide receiver before moving to running back. Junior tailback Xavier Johnson has drawn praise from head coach Ryan Day, offensive coordinator Kevin Wilson and Alford.

Could he be in line for carries or touches?

“He continues to impress our entire staff, just the way he comes to work every day,” Alford said. “He’s done a nice job. Now, where that’ll go as far as reps and things like that, time will tell. But he’s done a nice job. Very pleased with him. I love the kid. He’s an extremely mature kid and he takes care of his business. I’m excited about the prospects for X.” 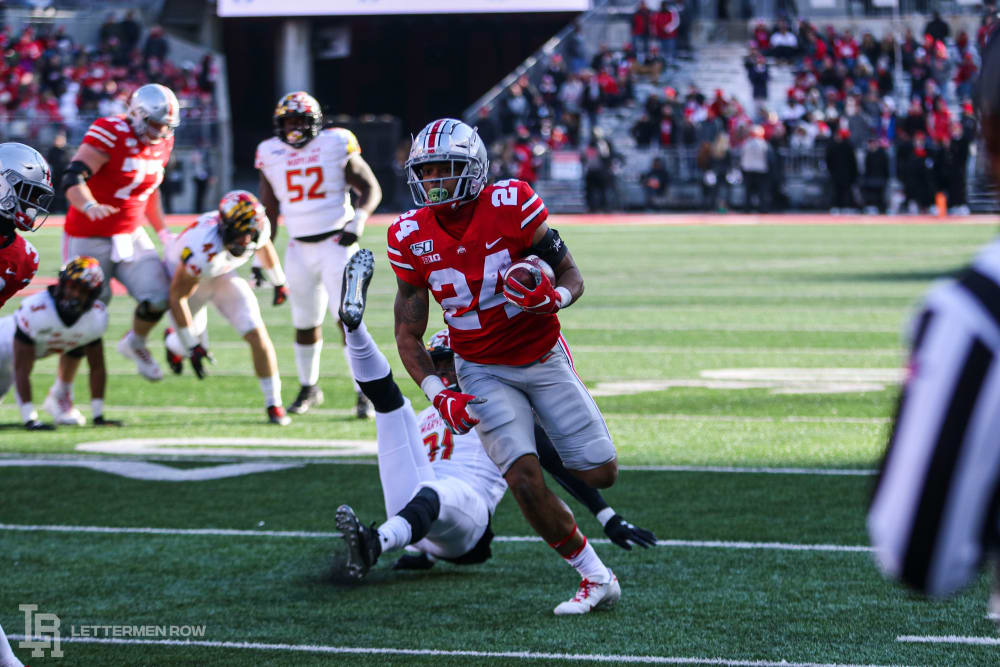 Marcus Crowley on way back from injury

Just as Marcus Crowley began to gain ground and find his footing during his freshman season, his year was done. On a run against Maryland last season in early November, Crowley tore his ACL and missed the rest of the season. He also missed the little spring practice session Ohio State had and some of the summer.

He’s working hard to get back to full strength and bolster the Buckeyes depth chart at running back.

“I really don’t know when he’ll be back, but I do know he’s coming back,” Alford said. “And incrementally coming back a little bit more every single day, so how fast that’s going to be when it’s full speed, I don’t have an answer for that unfortunately. But he’s fine, mentally he’s fine. He understands where he’s at. But you know, it is what it is.”

Whenever Crowley comes back to the fold for the running backs, the room will be more talented because of his ability to be on the field.