The speculation, debate and conversations about Ohio State never end, and Lettermen Row is always ready to dive into the discussions. All week long, senior writer Austin Ward will field topics on Urban Meyer and the Buckeyes submitted by readers and break down anything that’s on the minds of the Best Damn Fans in the Land. Have a question that needs to be tackled, like the one today about Ryan Day taking over after Urban Meyer retires? Send it in right here — and check back daily for the answers.

can someone from Lettermen Row please put out an article shedding some light on Ryan Day over Matt Campbell and how Ryan Day is qualified and what actions he should take. I think buckeye nation would really appreciate it.

The program isn’t completely his yet, but Ryan Day is about to take the keys from Urban Meyer to one of the premier jobs in the country.

And the offensive coordinator is an understandable, smart pick.

It’s definitely fair to at least wonder why the Buckeyes didn’t open up the position for interviews across the country considering they could essentially hire just about anybody they wanted. The outside wishlist almost certainly would have started with Matt Campbell from Iowa State and likely included Ohio State alum and Cincinnati coach Luke Fickell, along with just about any other proven coach on the market. But the Buckeyes are promoting from within for a variety of reasons, including the fact that Day himself is one of the most sought-after young coaches in the profession.

The work he’s done offensively has been truly remarkable, and the results are undeniable. Dwayne Haskins is supremely talented, of course. But the reason he’s heading to New York as a Heisman Trophy finalist is because Day was able to mold the power-spread offense to take advantage of his passing ability and help transition Ohio State away from being so reliant on a rushing quarterback. In terms of his coaching acumen, that’s where everything begins. 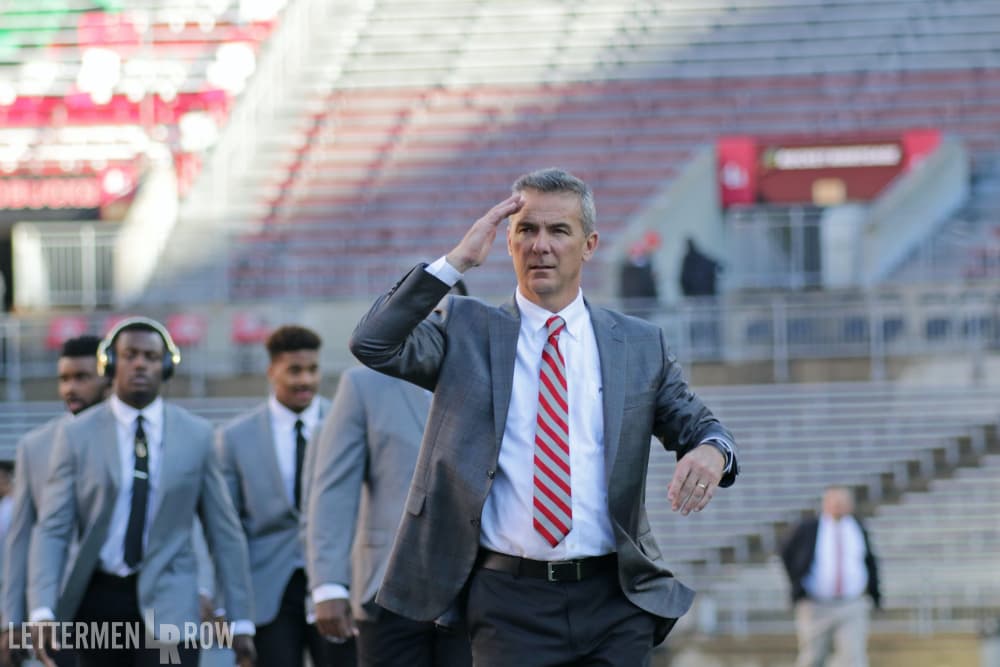 Urban Meyer is leaving Ryan Day all the tools he needs to be successful at Ohio State. (Birm/Lettermen Row)

Continuity on the recruiting trail and maintaining the same top-to-bottom structure of the program is a second major factor that works in favor of Day. Keeping critical components of the machine like strength coach Mickey Marotti, director of player development Ryan Stamper and recruiting guru Mark Pantoni was of paramount importance for Ohio State as it tries to keep what Meyer built in place. There’s no question that Day will have his own ideas in certain areas, but keeping the alignment that has worked so well should ensure a smooth transition — exactly like it did when Meyer was absent during training camp and the first three games of the season.

And when it comes to that suspension, Day had a chance to audition for the full-time job that obviously didn’t go unnoticed — either at Ohio State or around the country. The way Day handled such a difficult situation and his response both in public and private to tough questions and adversity won him a tremendous amount of support. One way or another, Day was going to be leading his own program at some point, and the Buckeyes wanted to make sure it was with them.

Everything is in place for Day to keep Ohio State operating at a high level, and this succession plan makes a lot of sense. But that doesn’t ensure it will all be easy, because he’s going to face at least a couple challenging issues right off the bat — and a hard look at the defensive staff should easily go down as the top priority. Assuming Day has a handle on that and how best to proceed, keeping him and the support staff around him in place wasn’t a tough call for Ohio State.

Now all he has to do is go meet the enormous standard left by Urban Meyer.