He was anxious to take the official visits he’d had set up for months. Excited for the chance to see the country and the coaches he’d built relationships with as he became a national recruit toward the end of last year.

The country’s No. 5-ranked safety figured those visits would make his recruitment more difficult. Turns out he was correct.

“I did expect the visits to make things a little harder,” Nwankpa told Lettermen Row. “I visited four schools that are really high on my list. The chance to go see those places, and there are a couple more I want to go see in the fall for games, plus I want to come back to Ohio State, Notre Dame, Iowa and Texas A&M. So yeah, things got a little harder.”

Things have happened which has made things harder for the Buckeyes, too. Ohio State has been the presumptive leader in the battle for the 6-foot-2, 190-pound safety for a while. That means every other school chasing Xavier Nwankpa has their sights set on the Buckeyes. With five defensive backs committed, Kerry Coombs and Matt Barnes have given plenty of ammunition to schools recruiting against them. The messaging is simple: Ohio State has four cornerbacks and a safety committed and one of those cornerbacks isÂ probably going to be used asÂ a safety.

Nwankpa has heard that from other schools. He’s also heard from Ohio State that it’s not the plan. He heard that during his official visit to Columbus, actually. There’s been no deviation in the plan from the Buckeyes side and the top-ranked player in Iowa says he trusts what he’s been told. One of the reasons for that trust? Ohio State has told Nwankpa that his spot will be there for him no matter when he wants to decide. There’s no rush, no pressure to “get in before someone else” or anything like that. 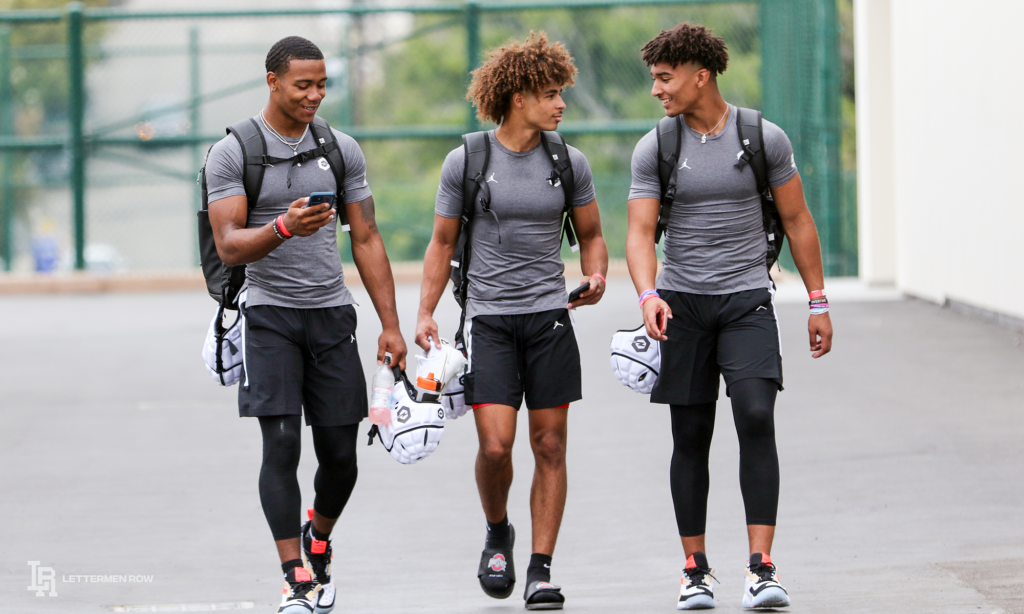 “I feel like I can come in and compete anywhere,” he said. “But I believe what the school is telling me. They’ve told me all along they’re taking three safeties. They’ve told me that for months. Kye will play cover safety and they want me and Zion Branch to play the bullet and free safety. The four commits at corner are corners.

“Ohio State hasn’t put a timeline on me or anything. I know some other players they’ve recruited who had a timeline, I’ve not been told that.”

The Buckeyes have three committed players in California and as usual, C.J. Hicks and Kyion Grayes have been by his side a lot. The connection that those young players, and the players Xavier Nwankpa met on his official visit, have continued to be a motivating factor in his recruitment.

“It’s just my connection with the players at Ohio State,” he said. “That’s what makes it different for me. I talk to Lathan Ransom all the time still. I hadn’t met a lot of the people there in person and didn’t know what it’d be like but I really vibed with a lot of them. That’s not a feeling I had everywhere else.”