Xavier Nwankpa finds Ohio State to be 'better than expected'
Article written by:

COLUMBUS â€” In June of 2019, Ohio State made a big impact on Lathan Ransom. In June of 2021, Ransom made an impact in the recruitment of Xavier Nwankpa.

The country’s No. 5-ranked safety was hosted by Ransom during his official visit with the Buckeyes this weekend. For Nwankpa, the chance to talk to the Ohio State safety led to a refreshed perspective on what it means to play the safety position: it’s all about versatility. Ohio State sees the 6-foot-2, 190-pound Iowan as a good fit at theÂ Bullet position, it’s hybrid spot in the defense. Nwankpa has always played a more traditional safety role, so it’s a slight adjustment that he’s now understanding better.

“Lathan plays cover safety,” Nwankpa told Lettermen Row on Sunday. “But he said that for him, personally, he’d like the chance to play the bullet too. He believes that it’d be a good way to be able to show you can do everything. Him saying that just kind of boosted the confidence for me in playing that position.”

The Buckeyes want adaptable defensive backs. That’s what Kerry Coombs expressed to cornerback Toriano Pride, and it was also the sentiment shared with Nwankpa.

“I went through a whole film breakdown with [secondary coach] Matt Barnes,Â  and a little bit with Coombs,” Nwankpa said. “Just to see how I fit in. It’s the ability to do anything and everything on the field and help lead the defense.”

Ohio State has been the perceived leader in the recruitment of Xavier Nwankpa for a while now. He’s been a major priority for the Buckeyes as well. This trip, however, was his first to campus. After a year-plus of Zooms and FaceTimes, he said it was just good to see people in person.

“The social aspect, that’s really what made the visit,” he said. “Getting to actually see everybody, not through Zoom. I could finally get a real sense of their vibe and everything. I think I got more than expected. Being able to see people’s facial expressions, seeing how they act, it’s kind of how I act. I can see myself there.

“The coaches and the players, they kept it real the whole time. They’ve been that way since the start and to see it doesn’t change just helps me feel more comfortable.” 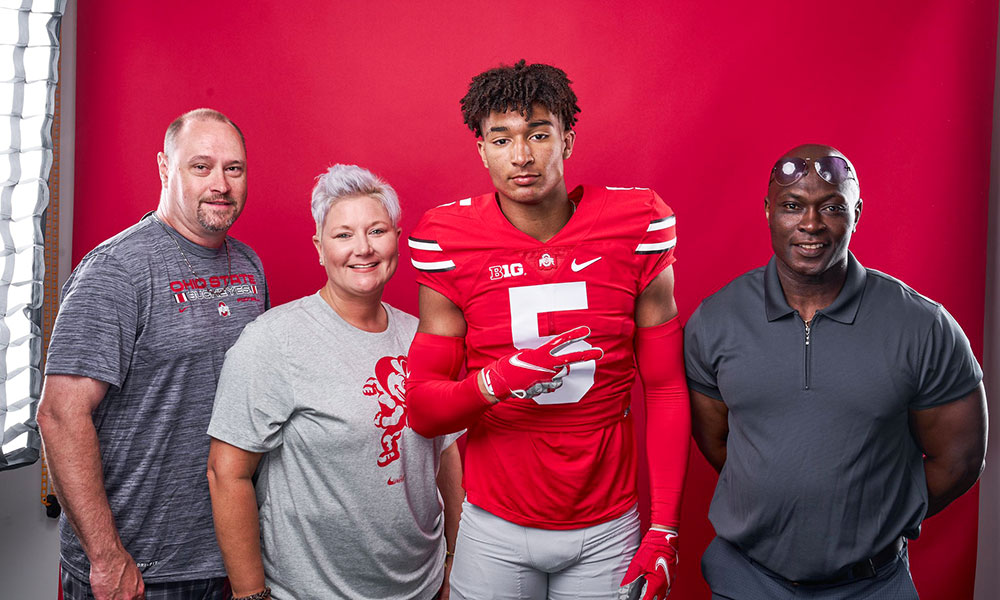 Xavier Nwankpa and his family were impressed by the Buckeyes and the Ohio State experience. (Xavier Nwankpa/Courtesy)

Matt Barnes has really been the primary recruiter for Xavier Nwankpa. After months of waiting to get on campus, the young secondary coach impressed the Nwankpa family.

“They loved them,” he said of the Buckeyes defensive coaches. “They loved the vibe they were giving. My parents loved the jokes that Coach Barnes was cracking all the time. Then we spent time talking to Coach Day for like 45 minutes and they really enjoyed that too.”

Ohio State had to show more than just football for Nwankpa and his family. Academics and life after football matter to Iowa’s top player.

“I talked to one of the professors there,” he said. “He was in my major, sports management, and just told me the options I’d have there. I know they’d set me up for the future there.”

Nwankpa started football workouts at Southeast Polk High School on Monday morning. Track ended two weeks ago. There’s not a lot of time for unofficial visit in his schedule so he won’t get back to Ohio State this summer. Getting to town for a game in the fall is a priority though.

“I’m going to try to get back probably a game day,” he said. “I really want to see the atmosphere at the stadium. With my other visits and football workouts I am going to be busy. I won’t decide until the season because I really want to get a chance to see everywhere.”

Texas A&M and Notre Dame are the next two stops for Xavier Nwankpa. Ohio State will have to keep making him a priority for another handful of months.