CHICAGO — The last thread from Urban Meyer’s first staff at Ohio State has been cut. Wide receivers coach Zach Smith was fired on Monday in the aftermath of a court appearance for a charge of criminal trespassing and previous allegations of domestic violence.

The leader of the Zone 6 unit was the only remaining holdover from the group of assistants Meyer assembled when he took over the Buckeyes in 2012, and he had deep personal and professional ties to Smith. Even before spending the last six seasons together with the program, the grandson of former Ohio State coach Earle Bruce had known Meyer since he was young, with Smith following him to Bowling Green as a walk-on wide receiver, catching on as a graduate assistant at Florida under him in 2005 and reuniting in Columbus with what amounted to a dream job.

Now it’s gone. And in some ways, the timing and the close relationship make this move something of a surprise. The Buckeyes are less than two weeks away from opening training camp, and after some ups and downs during his tenure with the receivers, Smith had recently been earning high praise for the strong, winning culture he’d established with his players. Additionally, facts presented by Smith’s lawyer seemed to point to the charge of criminal trespassing being dropped when the issue came to light on Wednesday. Smith had entered a not-guilty plea, and the fourth-degree misdemeanor carried just a maximum penalty of 30 days in jail and a $250 fine. 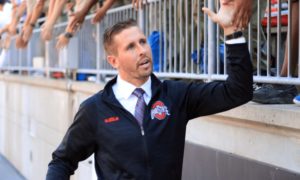 But there were previous allegations made against Smith involving domestic disputes, though charges against him had been dropped by his ex-wife. And that ultimately appeared to make the situation untenable for Meyer moving forward given the strict core values that he holds his team to at Ohio State.

Ohio State does have a potential solution for the new coaching vacancy already on campus. Former Buckeyes wide receiver Brian Hartline is already a quality-control coach for the offense and a valuable resource for players at the position thanks to his experience in the NFL. Hartline would appear to be a natural fit to slide into that role on a staff that after six full seasons under Meyer has finally now undergone a complete overhaul.