South Carolina Football hosted Day 8 of Shane Beamer Camp on Monday and Gamecock Central was once again on hand to document the activity!

Check out the photos below which include some shots of intriguing Gaffney (S.C.) class of 2023 EDGE/LB Brayshawn Littlejohn and 6-foot-8 tight end Luke Wilson, who worked out at offensive tackle for the Gamecocks.

Check out more on Monday’s camp insider and check out the full gallery below: 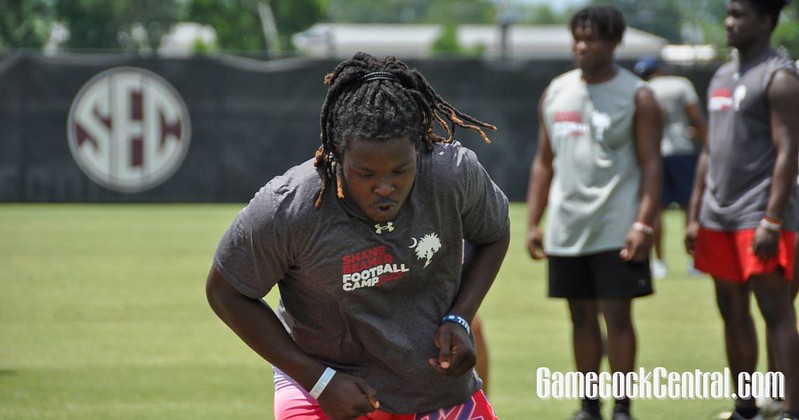 Anniston (Ala.) athlete Kamron Sandlin said he was nearly brought to tears when he learned what he called shocking news of a South Carolina football offer last month.

Now he’ll be a part of the program.

The 6-foot-4, 220-pounder, who plays quarterback in high school but will play tight end for the Gamecocks, announced his pledge to Carolina today.

Sandlin chooses the Gamecocks over Power 5 offers from Mississippi State and Kentucky.

Sandlin, who was in Columbia for the last two days, was recruited to Carolina by tight ends coach Jody Wright.

The big-bodied playmaker has not yet received a ranking on On3 but is ranked a three-star quarterback on Rivals.com.

Sandlin’s commitment to South Carolina comes as the Gamecocks are on a whirlwind recruiting tear this month.

Shane Beamer and Co. have landed six public commits in the last week.

Eaton (Ga.) four-star DB Jalon Kilgore also committed to the staff that day before going public on Wednesday evening during a ceremony at his church.

Earlier that day, Rock Hill (S.C.) Legion Collegiate three-star ATH Judge Collier told the staff he wanted to be a Gamecock before announcing his intentions on Saturday.