South Carolina football hosted Day 5 of the Shane Beamer Camp on Thursday and several top Gamecocks’ targets were on hand for the OL/DL camp and 7-on-7 tournament. 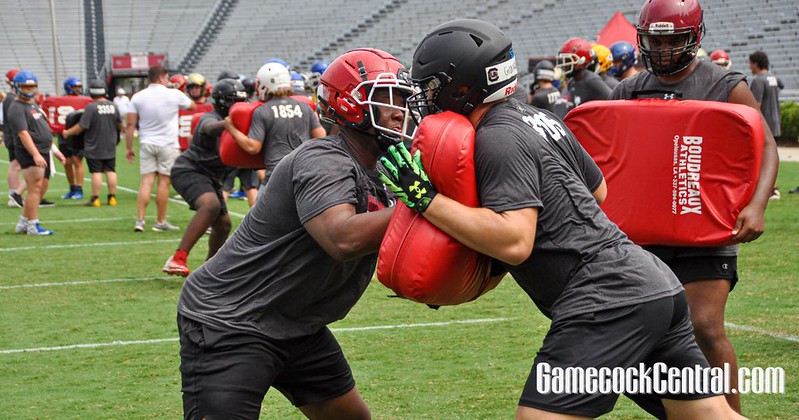 South Carolina football picked up an intriguing talent to add to the roster on Thursday in the form of Jalen Daniels. The big-armed passer from the 2022 class played his final high school season in San Diego, California, moving over from Arizona. He is expected to initially walk on to Shane Beamer’s program.

“After an amazing visit to South Carolina and talking with Coach Beamer, Coach Satterfield, and meeting with a great staff, I’ll be 1000% committing to the team that gave me my first chance. Go Gamecocks,” Daniels said via Twitter within his announcement.

The 6-foot-5, 220-pounder only started playing football during his freshman season of high school. He held a scholarship offer from Syracuse during the recruiting process. He utilizes Mike Giovando of Elev8 Sports Academy as his personal quarterback trainer, the same person who has worked for years with Gamecock passer Spencer Rattler.

For the 2022 class, South Carolina football brought in a pair of scholarship quarterbacks to add to the roster in Delaware’s Braden Davis and Alabama product Tanner Bailey. Davis joined the program as an early enrollee in January, while Bailey was a later arrival this summer. Other scholarship quarterbacks on the Gamecock roster include the aforementioned Rattler as well as Colten Gauthier and Luke Doty.

“He’s a winner. He loves the game. He competes at the highest level every single day in practice. He gets his teammates into it. He’s selfless. He’s very competitive,” said Lincoln High (California) assistant Jason Carter of Daniels during an interview with KUSI News last year.

As a senior at Lincoln, Daniels threw for 2,442 yards with a 63 percent completion rate and 18 touchdowns through the air. He added 4 touchdowns and 183 yards on the ground.

Although Daniels will join the program as a preferred walk-on initially, a player of his talent level – who carried a Power 5 offer in high school – is not a typical walk-on prospect. South Carolina football’s 2022 recruiting class was ranked 26th nationally by the On3 Consensus Football Team Recruiting Rankings.

Discuss South Carolina football and recruiting on The Insiders Forum