The speculation, debate and conversations about Ohio State never end, and Lettermen Row is always ready to dive into the discussions. All week long, senior writer Austin Ward will field topics on the Buckeyes submitted by readers and break down anything that’s on the minds of the Best Damn Fans in the Land. Have a question that needs to be tackled, like today’s that looks at Brian Hartline? Send it in right here — and check back daily for the answers.

Negative or positive in your opinion

Ohio State’s coaching staff has now officially undergone a complete transformation since Urban Meyer arrived and took over the program in 2012. Zach Smith was the last holdover from his initial group of assistants, but after his firing on Monday, now it appears to Brian Hartline’s turn to lead the Zone 6 wide receivers. A former wideout for the Buckeyes himself, Hartline should be wearing the interim tag — but expect that to just be a matter of protocol and a formality before he becomes the permanent leader of a talented, deep unit. Meyer hasn’t yet confirmed the move while in Chicago for Big Ten media days, but sources have confirmed to Lettermen Row that this will be the direction for the program.

So, what will Hartline bring to Ohio State? And is this move a net positive or negative for the Buckeyes? 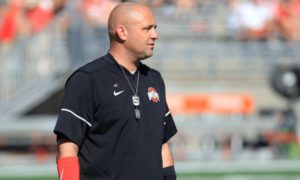 Zach Smith was fired by Ohio State on Monday, and Brian Hartline will take over as the interim assistant. (Birm/Lettermen Row)

First of all, Hartline is already an established figure with the wideouts thanks to his previous role as a quality control assistant on offense. That provides invaluable continuity for both the staff and the players, and Hartline has already established some strong relationships with leaders like Johnnie Dixon. He’s also somebody who clearly understands the position and what it takes to become an NFL-caliber target, and that wisdom should help in the development process for the Buckeyes. And from a recruiting standpoint, that expertise figures to be pretty appealing for high-end talent that are hoping to become professionals down the road as well.

As for evaluating the move, it’s still a bit early to know for sure exactly how successful this move will be. Hartline has all the qualifications anybody could need for this role, but he hasn’t been a full-time coach or a recruiter yet. There’s no reason to doubt his ability to handle the responsibility, but it’s simply worth noting that he’s heading into the job without any experience and replacing somebody who had been doing it for the last six years at Ohio State. From a public relations standpoint, though, this is absolutely a positive for Urban Meyer and the Buckeyes. Even if no charges ever stuck to Smith, the perception of him was irreparably harmed and could have damaged Meyer’s strong disciplinary program and core values that demand treating women with respect. He had no choice in that matter.

Moving forward, putting somebody who has represented Ohio State on the field and understands what it means represents a significant silver lining to a tough situation. And while this is all new, right now it feels like the addition of Hartline could wind up being a positive for the Buckeyes.