Buckeyes report to camp as 'gold standard' with B1G target on backs
Aritcle written by:

Call that gold standard what it really is: A huge, shiny target on the backs of the Buckeyes.

â€œI think thereâ€™s been a target on the back of Ohio State for a long time,â€ Day said. â€œAnd thatâ€™s a good thing.â€

The Buckeyes are sporting a conference-record four straight titles in the championship-game era and are heavily favored this year to make it five, with what recruiting analysts consider to be the best stockpile of talent in the league for many years running. So that target on the back is gleaming like never before.

â€œThey are the gold standard — the way the way theyâ€™ve dominated our conference in the last several years is impressive,â€ Allen said. â€œSo that is who weâ€™re chasing after, because reality is, theyâ€™re in our division [the East], not just in our conference. â€¦ In order to get to the championship game youâ€™ve got to be able to get through and win your division first.

â€œTheyâ€™re the ones in the way. Thereâ€™s other teams, too, that are really good â€¦ but thatâ€™s why you want to be here. Youâ€™re in a league where it means a whole lot [to win it all]. â€¦ Itâ€™s tough, but you know what? That elevates us.â€ 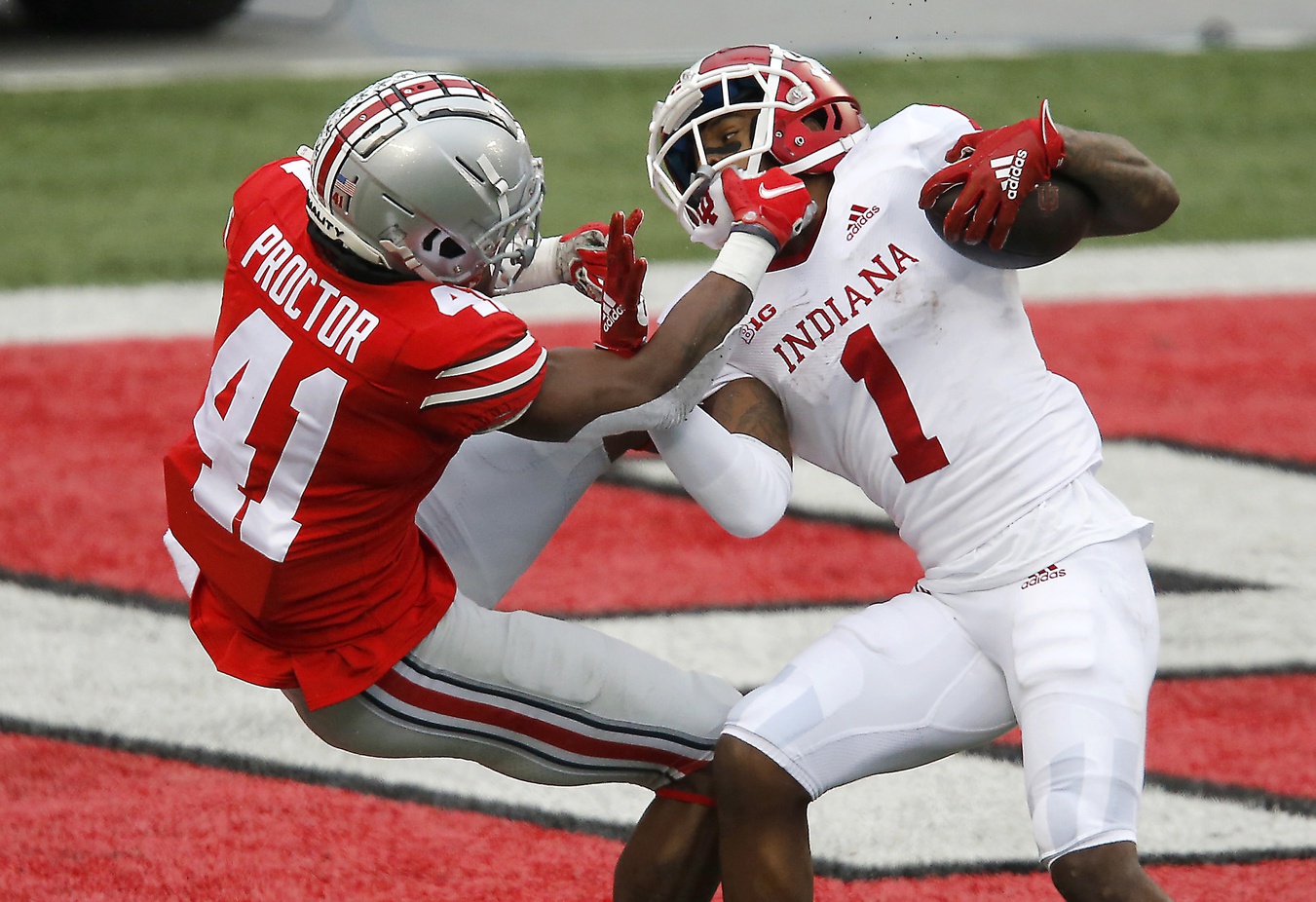 His team isnâ€™t the only one in the league in the chase, but his Hoosiers came the closest to catching the Buckeyes in last yearâ€™s pandemic-shortened season. Indianaâ€™s thrilling second-half comeback fell just short in Ohio Stadium. But in the final analysis, all that meant was that for the past two years, no team in the Big Ten has beaten Ohio State.

Now, Iowa bushwhacked the Buckeyes 55-24 in 2017 and Purdue pulled a similar ambush 49-20 in 2018, both stunning upsets to say the least. Those losses eventually cost Ohio State berths in the 2017 and 2018 College Football Playoffs, the last two seasons of the Urban Meyer era. But the Buckeyes still rebounded to win Big Ten title games over Wisconsin and the Northwestern in both seasons.

Ohio State went 20-0 — including title game wins again over Wisconsin two years ago and again over Northwestern last season — versus the league the past two years as the Day era dawned. The value of the â€œgold standardâ€ of the Big Ten just seems to have increased headed into this season, and for two major reasons.

â€œTheyâ€™ve got a lot of talent and a good coaching staff,â€ Nebraska coach Scott Frost said.

That is the essence of it, but Allen elaborated on the theme.

â€œSometimes you play teams â€¦ and you find that little chink in whatever they do,â€ Allen said. â€œLike maybe theyâ€™ve got a bunch of great athletes but theyâ€™re not as well coached, whatever, just different things.

He was an assistant coach at Ole Miss in the Southeastern Conference from 2012-2014.

â€œIâ€™ll never forget, the first time we lined up against Alabama and LSU and some of those teams, they just looked different than any other team Iâ€™d ever seen in my coaching career, and you came away feeling similarly [facing Ohio State] — especially Alabama,” Allen said, “You have to play so well to be able to take advantage of whatever you might be able to get, and any mistake you make it just magnifies it against teams of that talent level.

â€œThen the other thing, a guy does down, a guy comes in, thereâ€™s not any dropoff, which is not normal. Usually thereâ€™s a little bit of a dropoff. So I canâ€™t say enough great things about them.â€

The talent of the Buckeyes, who, for example, have won or shared the Chicago Tribune Silver Football award seven of the past nine seasons, is apparent to all, Northwestern coach Pat Fitzgerald said.

â€œTalent jumps out, No.1, but I think just the consistency in the way each team has gone about the way they play their brand of football,â€ Northwestern coach Pat Fitzgerald said. â€œTheyâ€™re incredibly explosive. Theyâ€™re outstanding on both sides of the ball up front.

â€œBut I think their quarterback play is probably what separated them,â€ Fitzgerald said. â€œWhen you look at the consistency of different quarterbacks over multiple years [five played significant roles the past nine seasons], thatâ€™s probably whatâ€™s most impressive.â€ 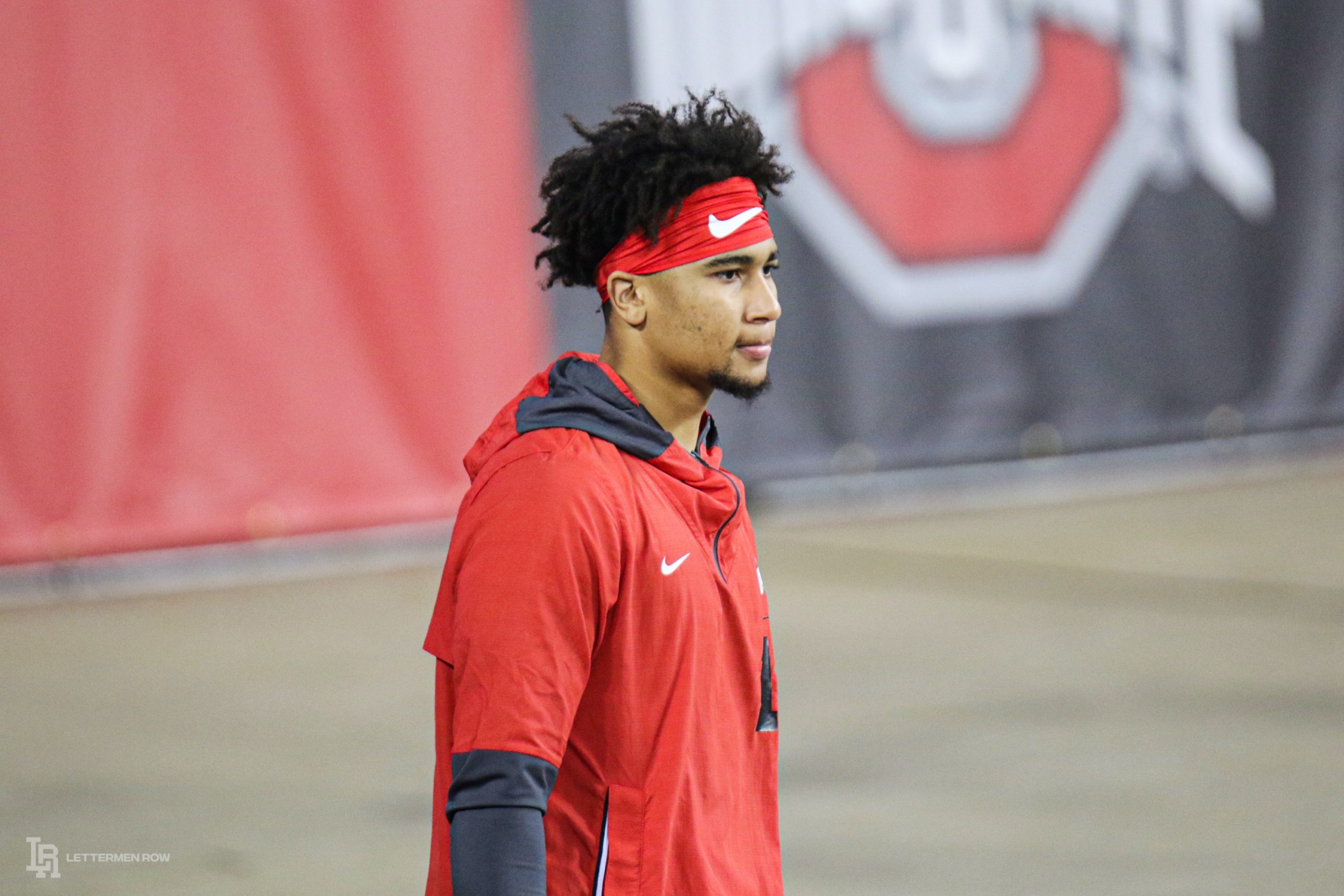 Will that be the case again this year? The top question Day and his coaches are facing headed into camp is which inexperienced quarterback among redshirt freshmen C.J. Stroud or Jack Miller or freshmen Kyle McCord and Quinn Ewers will take the starting job. Stroud is considered the favorite.

Nevertheless, whomever wins the spot has never thrown a collegiate pass. Itâ€™s a great example of the challenge the deeply talented Buckeyes now seem to face every season, mixing veterans with highly touted risers and newcomers due to the turnover brought by the best players leaving early for the NFL. It makes bearing that target on the back a challenge.

â€œThereâ€™s a balance — talent is one thing, but you also have to have a level of maturity with your team,â€ Day said. â€œI thought we struck that balance the last couple of years. We had some really good leadership, fifth-year seniors, Jonathon Cooper, and when Terry McLaurin was here, Justin Hilliard. Even C.J. Saunders, he didnâ€™t play much [due to injury] but he was a veteran presence in that locker room.

â€œAnd Iâ€™m hoping we have some of those guys this year. When you combine that with young talent, I think thatâ€™s the recipe at Ohio State. If you go too young â€“ like right now, we have 45 first- and second-year players on our team that really havenâ€™t played a lot of football, at all. And thatâ€™s scary, because even though theyâ€™re talented, they havenâ€™t played a lot of football.Â Eventually theyâ€™re going to become good football players. But how quickly can we get them to that point, without having spring football last year, and missing a thousand game reps last year?â€

He knows no one in the league has sympathy for that challenge. That will be obvious from the opener at Minneapolis on Thursday night Sept. 2.

â€œGreat example of that is this team weâ€™re playing in Minnesota,â€ Day said. â€œThey have fifth-year (players) all over the place. They have a lot of veteran guys that have played a lot of football.â€

But Ohio State will be the team wearing the target because, as Iowa coach Kirk Ferentz pointed out, the Buckeyes have been impressive from a talent and coaching standpoint for decades.

â€œIâ€™ve been in this league for quite a while,â€ Ferentz the longest-tenured major college coach in the country, said. â€œYear in and year out, including my six years in the NFL, looking at draft boards. â€¦ Nobodyâ€™s had more higher draft picks than Ohio State, to my knowledge. â€¦ Then on top of that they have great coaching staffs, no matter whoâ€™s there â€¦ Theyâ€™ve got great support.

â€œSo thereâ€™s a reason why them, Clemson, Alabama â€¦ are the first three people think of. And I donâ€™t see it going south, I donâ€™t know why it would, at least in the near future. So you know, compete with them. Thatâ€™s all you can do.â€