The speculation, debate and conversations about Ohio State never end, and Lettermen Row is always ready to dive into the discussions. All week long, senior writer Austin Ward will field topics about the Buckeyes submitted by readers and break down anything that’s on the minds of the Best Damn Fans in the Land. Have a question that needs to be tackled, like the one today about the Ohio State and the return of Chase Young? Send it in right here — and check back daily for the answers.

Last time we saw Chase Young, he fortified himself as a legit Heisman contender, even standing up at linebacker at times to wreak havoc on Wisconsin.

How we will see Mattison/Hafley deploy him this week vs Penn State? There will obviously be a concerted effort to neutralize CY2.

Nearly four full weeks will have passed since Chase Young last put on his Ohio State uniform, delivering a pass-rushing masterpiece and solidifying himself as a legitimate defensive threat to win the Heisman Trophy.

Thanks to the combination of a quirky schedule and his two-game NCAA suspension for accepting a loan from a family friend that was repaid over the summer, that’s quite a layoff for the junior captain. But anybody expecting rust on Saturday against Penn State will probably be disappointed, because it’s not like Young hasn’t been working out, practicing and preparing to channel his frustration into an encore performance.

How will Ohio State unleash him? It would be surprising if Young didn’t play more snaps against the Nittany Lions than he has in any game this season. And it would be even more shocking if it didn’t continue to move him around the formation like it did against Wisconsin to keep getting him advantageous matchups.

But even if the Buckeyes just line him up for every snap in one spot and Penn State does make a concerted effort to slow him down, that’s probably not going to work. In fact, given the rise of the defensive tackles, the development of Tyreke Smith and Zach Harrison during his absence and the fact that Young has been almost unstoppable this season anyway, the Nittany Lions might create more headaches for themselves if they do throw extra bodies at the Predator.

Young’s off-the-charts productivity is obviously a tribute to his unique physical gifts, dedication to his technique and knowledge of the position. But he’s not out there working alone, and a major part of the success for the Buckeyes up front has come from the fact that blocking guys like DaVon Hamilton, Jashon Cornell or Smith one-on-one is essentially an open invitation to go hit the quarterback. Maryland thought it could relax a little in protection two weeks ago when Young was out, and Ohio State responded with a season-high, seven-sack onslaught. 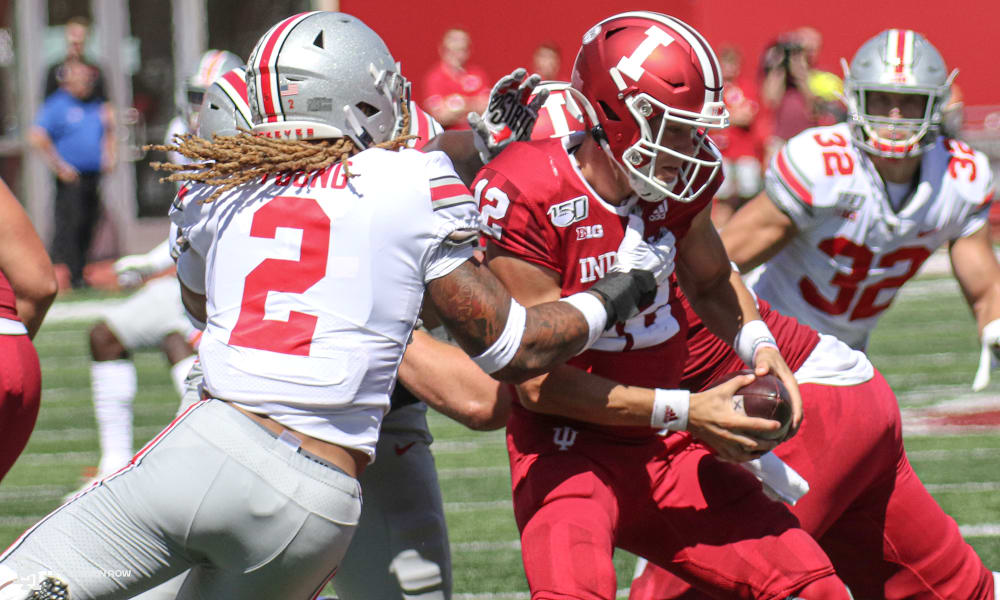 Ohio State defensive end Chase Young is on the brink of setting the school record for sacks. (Birm/Lettermen Row)

Now the Buckeyes get to add the leader of that unit back into the mix, and obviously that’s a huge deal for a team trying to win the Big Ten for the third straight season.

The Buckeyes waited until the end of October before unveiling that new package for Young as a stand-up rusher prowling around as a linebacker, and that’s a pretty strong hint that it has more tricks planned when the talent equates and championships are on the line. If Young had been injured over the last month or barred from participating on the practice field, maybe Ohio State would have to scale back a little with him this weekend.

Instead, though, the Buckeyes are getting a fully-charged, motivated version of Chase Young back in action for the biggest game of the season.

Can he top what he did against Wisconsin? It sure doesn’t seem like a great idea to bet against him.