COLUMBUS — The real deal was on the sideline in a black hoodie and vintage Ohio State hat.

Nobody in pads could reasonably have been expected to do everything Justin Fields did over the last two seasons, but C.J. Stroud certainly did the best impression.

The sophomore quarterback rolled to his right in the red zone. Chris Olave snapped out of his break and worked back toward the boundary. A throw that was nowhere near as easy as Fields ever made it look was again delivered right on the money with Stroud nailing the execution of a staple of the Ohio State playbook.

Is it fair to compare any of the young Buckeyes vying to replace Justin Fields to the genuine article without ever throwing a pass in a college game yet? Of course not. But the standards aren’t getting any lower for the four-time defending Big Ten champions, and right now Stroud looks like the clear leader in the chase for a fifth.

“This was just a very small glimpse at a bunch of guys taking some reps,” Ohio State coach Ryan Day said after the spring game on Saturday. “Thereâ€™s a body of work that needs to be built from that first spring practice all the way through the first game thatâ€™s still yet to be written. 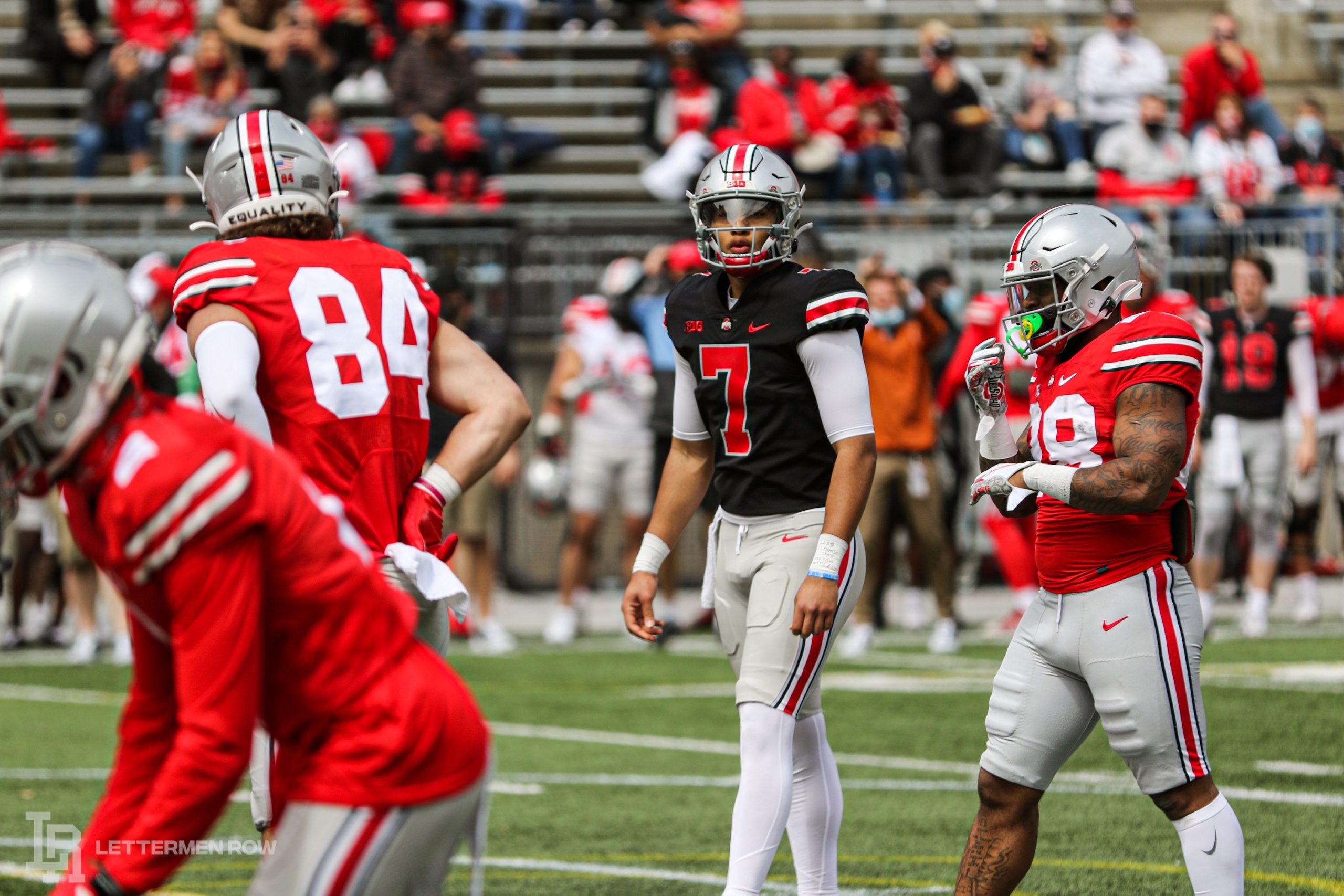 “Theyâ€™ve learned a lot, but now the race is on over the next few months to see who can make the next stride so theyâ€™re further along. Spring has been good, but there’s still a long way to go before Minnesota.”

Make no mistake: Ohio State has three talented options, and it’s not a stretch to believe that all of them could help guide this loaded roster back to the College Football Playoff. But it would qualify as a surprise at this point if Stroud isn’t taking the first snap against the Gophers in September.

Obviously one scrimmage isn’t going to be the deciding factor, particularly when there was no live tackling and makeshift lineups in the Horseshoe. So, this isn’t about the early interception from Jack Miller or what seemed to be some hesitant decision-making. It’s definitely not a knock on Kyle McCord, who appears far more advanced than a typical early enrollee and clearly has enough arm strength to stretch the field for the Buckeyes.Â And it’s not just about the Fields-like touchdown throw to Olave or the bullet to Marvin Harrison Jr. that accounted for the two scores from Stroud.

As the body of work continues to grow, there’s been nothing to suggest that Stroud’s place at the head of the line is going to change. He earned the backup role last season, and the Buckeyes obviously didn’t flip a coin when they needed somebody to come off the bench in the Sugar Bowl. He was the guy taking the first reps in all three spring practices with open-viewing periods. And he closed camp with an outing that didn’t really leave much to debate heading into the summer. 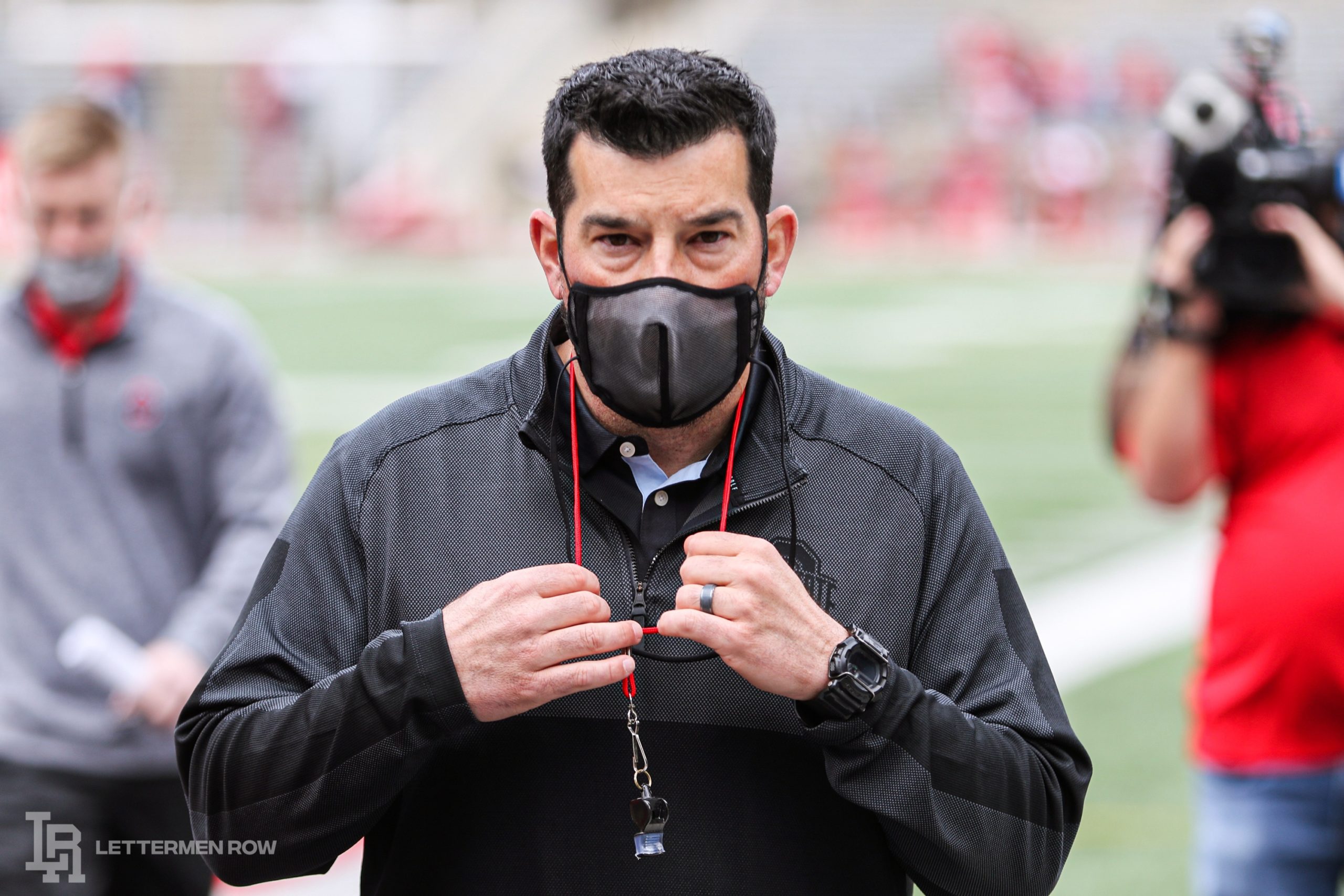 Stroud isn’t guaranteed anything heading into training camp, of course. The last time the Buckeyes were in the Horseshoe for a scrimmage two years ago, Day handled his quarterback situation the exact same way. He stressed the need for continued competition, more reps and more data — and that was with Justin freaking Fields.

Maybe this isn’t quite the open-and-shut case that Fields seemed to be, even though Stroud was actually much sharper in his first spring game than the eventual Heisman Trophy finalist was in his. It’s also possible that Miller just needs more time to get comfortable after an extended layoff from meaningful action at quarterback or that McCord’s jump-start in spring could allow the five-star to keep making up ground in training camp.

That’s why Day isn’t locking himself into a decision before it’s required, and there’s absolutely nothing wrong with that. But even if the competition isn’t over, it’s not that hard to figure out who has the current lead.

“We talk about it all the time. You canâ€™t go out there and win the job on one play.”

C.J. Stroud made one that looked exactly like what Ohio State needs from its starting quarterback with the last guy looking on from the sideline.

Odds are he will have a chance to prove he’s also the real deal in September.