The speculation, debate and conversations about Ohio State never end, and Lettermen Row is always ready to dive into the discussions. All week long, senior writer Austin Ward will field topics on the Buckeyes submitted by readers and break down anything that’s on the minds of the Best Damn Fans in the Land. Have a question that needs to be tackled, like the one today on Demario McCall? Send it in right here — and check back daily for the answers.

Health no longer appears to be a concern for Demario McCall, at least not based on the burst, wiggle and electricity he produced on a 26-yard punt return that showed exactly why there is always so much buzz about his potential. But depth is clearly still a factor at Ohio State, and along with what seemed to be a suggestion that ball security might be a concern, McCall still doesn’t appear to be in position for a consistent role right now.

Obviously that can change for the Buckeyes. The eye-opening work on special teams might even turn the tide pretty quickly. But after a dynamic performance in the spring game and an offseason of conversation that McCall would at least be helping in the return game, it was certainly a surprise to see C.J. Saunders out there early fielding punts and Johnnie Dixon bracketed on top of the depth chart for kickoffs.

So, can McCall finally start chipping away and at least claim more regular work on special teams moving forward?

“He’s part of a group that’s pretty deep right now,” acting head coach Ryan Day said. “He’s working his way up. He had a nice return in the game. I think it was 26 yards, really did a nice job there, ball was high, nice and tight, so [good] ball security.

“Anytime you put that on film, that’s going to give us more and more confidence to put him back out there.” 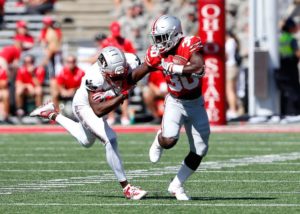 The Buckeyes could definitely use that after a couple seasons of shakiness on special teams, a streak that didn’t even end on Saturday with Saunders muffing a punt that was recovered by Oregon State. Of course, Ohio State wouldn’t be keeping McCall on the sideline for no reason, so if there was clear-cut confidence in him, he would already be on the field more.

That’s probably going to start happening more in the kicking game starting this weekend against Rutgers. But it’s still hard at this point to see McCall getting much work offensively with Ohio State already rotating so many proven weapons at every skill position. Putting him in the game would potentially mean taking somebody like Parris Campbell or K.J. Hill out of it at H-back. Giving carries to McCall would mean fewer for elite tailbacks J.K. Dobbins or Mike Weber. Even now that he’s healthy, McCall is probably still going to need to show some patience.

That might not be the case as the punt returner, though. And Demario McCall took steps 26 yards in the right direction on Saturday to finding a way to boost the Buckeyes.