National Signing Day was emblematic of the last couple of years for the Ohio State offensive line.

There were some successes, most notably with the addition of 4-star Hawaiian offensive guard Enokk Vimahi — who’d only been offered a month earlier — but also 3-star offensive tackle Dawand Jones, whose offer list looked more impressive than his recruiting rankings. But there was also a setback, as 4-star offensive guard Doug Nester, the first player to commit to Ohio State’s 2019 class roughly 18 months earlier, chose instead to sign with Virginia Tech. It was a massive loss for the Buckeyes given that Nester is further along and more polished at this point than Jones or Vimahi.

Ohio State currently has 13 scholarship offensive linemen. Even if the Buckeyes land Rutgers graduate transfer Jonah Jackson, he’s a one-year player who won’t change the math on how many players the Buckeyes need to add in the next recruiting class to have a healthier depth chart. All signs point to one thing in particular: 2019 is a crucial year for Ohio State offensive line coach Greg Studrawa, who was retained by new coach Ryan Day but leads a position that needs to make strides in both roster numbers and in-game execution.

The bill for the numbers situation isn’t going to come due in 2019, but it’s the type of problem that can haunt teams down the road. Ohio State has missed on five in-state offensive linemen it wanted over the last two cycles, including four in 2019. The one miss of 2018 was a pretty big one you may have heard of before — 5-star offensive tackle Jackson Carman. The result of those misses is that Ohio State hasn’t signed its ideal amount of offensive linemen in either of the last two classes. The 2018 class included tackles Max Wray and Nicholas Petit-Frere and center Matthew Jones. In addition to Jones and Vimahi, the 2019 class included center Harry Miller and tackle Ryan Jacoby. 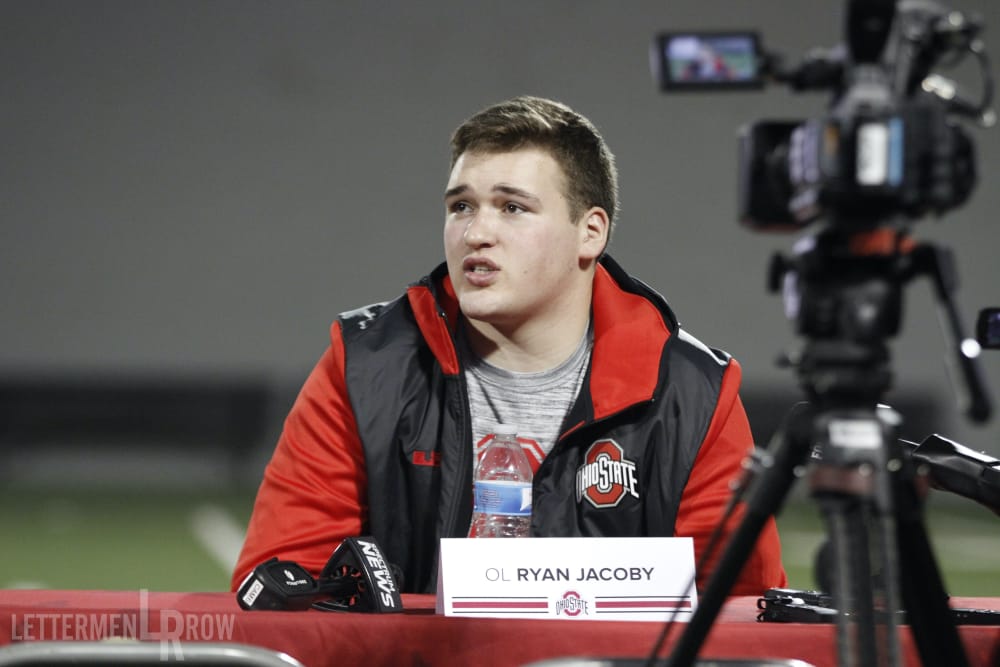 Here’s how the roster currently looks:

That’s not the most dire situation ever, but it’s not hard to see how things could become worse. Unless Branden Bowen gets a sixth year of eligibility, he and Josh Alabi will be gone after 2019. Thayer Munford will be draft eligible and will have started the last two seasons at left tackle. Enokk Vimahi is planning to take a two-year mission trip after this season. Ohio State will likely be looking at needing three or four signees in the 2020 class just to stay put at the same number of scholarship linemen. And since the Buckeyes want to boost that number, the ideal amount of offensive line signees for next year’s cycle is probably five or six.

That probably wouldn’t be as big of a concern were it not for the fact that Ohio State has hoped for a big class each of the last two cycles and fallen short. That class is already off to a good start with three commitments, but 5-star Paris Johnson and 4-star Luke Wypler came largely courtesy of Urban Meyer (Johnson) and Greg Schiano (Wypler), and neither coach is still on the staff. Even if both stay put, Studrawa needs to come up big on the recruiting trails — or at least hope Ohio State’s area recruiters for top offensive linemen do so.

The on-field product needs improvement, too, and will have to do so after losing four starters. A solution needs to start in the middle.Â The offensive line has failed to field a natural center for the three consecutive seasons. While Billy Price and Pat Elflein shined at center (and Michael Jordan largely fared well too), guards are more valuable than centers — look at any NFL draft — and Ohio State’s inability to develop a center cost it premium players at an important spot by forcing them to move to center.

Having a true center would make Ohio State’s lineup construction a lot easier. Assuming Myers or Jones can win the job, the rest of the lineup would include something along these lines: Munford at left tackle, Davis and Bowen at the two guard spots (or Jackson if he chooses Ohio State) and then either Alabi or Petit-Frere at right tackle. That’s a good offensive line! But again, the problem is what comes next. Ohio State would be looking at somewhere around three or four starters departing again. As such, what really needs to happen is that the freshmen backups need to take a leap so they’re ready to provide contribute as second- or third-year players in 2020.

And let’s not overlook the fact that all these new starters or young players need to find a way to improve the on-field product from last year. Other than the superb showing against Michigan, which felt like an out-of-body experience, the Buckeyes had some up-and-down performances throughout the year. Jordan struggled to snap the ball (probably because he was forced into a position he shouldn’t have been playing) and his teammates couldn’t stop committing penalties. Even in the 14th game of the season, Ohio State was penalized for five (FIVE!) false starts from a total of four different players. A week before that, the linemen were flagged for two holdings, one personal foul and a false start. In a near-loss to Maryland, the offensive line committed three false starts, three holdings and a face mask. Over the course of the season, Ohio State offensive linemen committed more penalties than Northwestern’s entire team.

None of this is unfixable, and some of the issues aren’t necessarily imminent. But because of self-inflicted problems on the recruiting trail and in player development, there are a lot of ways things can go wrong for the Ohio State offensive line. That unit needs to improve, not just maintain the current status quo, and because there’s very little margin for error it will be hard enough to simply hold steady.