The speculation, debate and conversations about Ohio State never end, and Lettermen Row is always ready to dive into the discussions. All week long, Lettermen Row will field topics about the Buckeyes submitted by readers and break down anything thatâ€™s on the minds of the Best Damn Fans in the Land. Have a question that needs to be tackled, like the one today about the Ohio State andÂ Jameson Williams? Send it inÂ right hereÂ â€” and check back daily for the answers.

Is there anyone on the roster that is being groomed the same way Chris Olave was last year to have an impact toward the end of the season?

Everything at Ohio State starts on special teams, especially at wide receiver.

Each of the mainstays in the wide receiver rotation have cut their teeth for the Buckeyes on various special teams units before finding time in the six-man pass-catching platoon. And the best example of that might just be Chris Olave, who announced his name to the college football world late in November against Michigan last year.

So, could Jameson Williams be on a similar trajectory? The similarities are there. Olave and Williams both have track speed. They both have made an impression on the coaching staff on special teams. And some program insiders have indicated that Olave has already taken Williams under his wing and the two are becoming close friends off the field.

Oh, and of course, Ohio State wide receiver coach Brian Hartline mentioned the path Olave took is similar to the one Williams seems to be on.

“I can only kind of go back to previous guys or guys that have journeyed that same path, and the first guy that’s close to us is Chris Olave — and where his role was at this time last year compared to what Jameson’s current role is, too,” Hartline said days after Williams caught the first touchdown of his career against Miami (Ohio). “I can’t speak enough about him. He’s working his tail off.”

Williams has been buried from many headlines regarding young receivers at Ohio State since he arrived. He came to Ohio State with Garrett Wilson, a consensus five-star prospect, who seems destined for stardom and has already impressed with acrobatic catches. 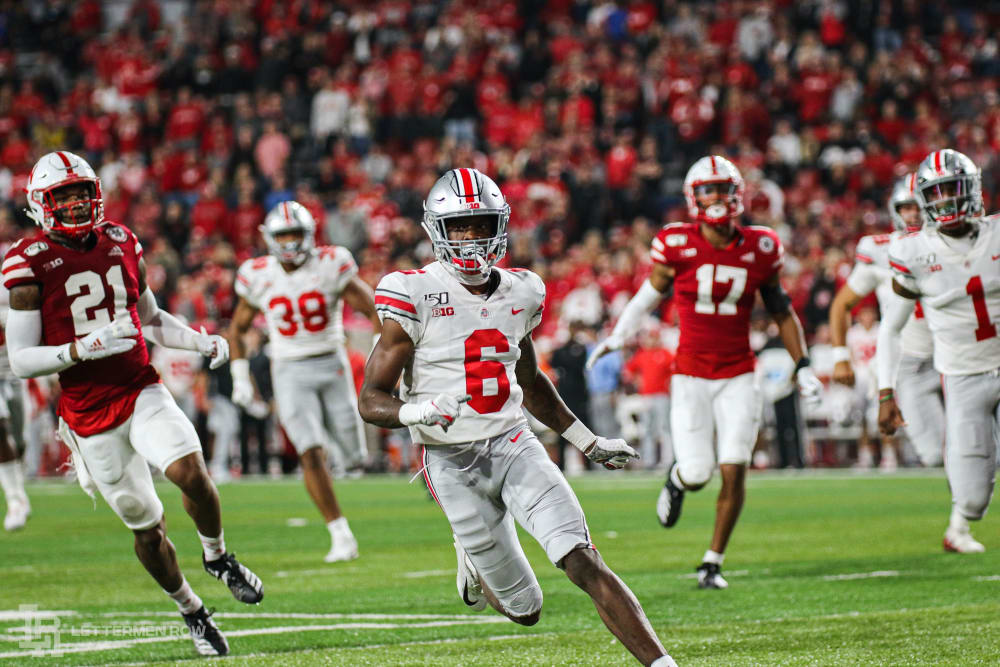 Ohio State wide receiver Jameson Williams is carving out a role for the Buckeyes. (Birm/Lettermen Row)

But Ohio State knew what it was getting in Williams. He’s a speedster who can turn a simple slant route into a 60-plus-yard touchdown catch with a split of two would-be tacklers. What the Buckeyes might not have known, however, was how tough Williams was coming out of high school. It’s a bit harder to run away from everyone in college than it is in high school.

“We knew his length, we knew his speed, but what we didn’t know was how tough he was,” Ohio State coach Ryan Day said. “This is a guy who’s practiced really, really hard. He goes in there and just tries [hard] — there’s a couple clips of film where he’s just throwing his body around. That was really impressive to all of us.

“His work ethic is really good. I think he’s got a really bright future ahead of him. Now, does he have to learn how to play at this level and all that? Absolutely.”

That Williams still has a lot to learn isn’t a problem at all. That’s what Olave had to do last season, too. And the season is only halfway done. There’s plenty of time for Williams to take the next step — like the one Olave took before breaking out for two touchdowns in the biggest game of the year.

Whenever that time comes, even if it doesn’t happen this season, Jameson Williams will be a guy to keep an eye on that has been cut from the same cloth through the first few months as Olave.

“He’ll be an exciting guy to watch now and for years to come,” Hartline said.