COLUMBUS â€” It’s been a crazy couple of weeks for Kenneth Grant.

After showing up and showing out at an Ohio State one-day camp on June 2, the 6-foot-5, 340-pound defensive tackle has seen his life get flipped upside down. Since that first visit with the Buckeyes, Grant — the No. 10-ranked prospect in Indiana — has been on the phone with Larry Johnson a lot. The Buckeyes defensive line coach has been consistently honest with Grant, making sure the Merrillville High School standout understands the way Johnson and Ohio State views him — and the way he views himself.

That was the message, the motivator, on Grant’s official visit.

“Coach Johnson thinks I have a lot of potential,” Kenneth Grant told Lettermen Row. “And it’s just not out yet. He recruits some players that are five-star prospects and at the peak of their careers already. I’m not one of those guys. He told me to know that I’m just getting started, but that he sees something great in me.”

Hearing that from Larry Johnson has been a special experience for Grant.

“It’s very humbling and exciting,” Grant said. “He’s the only one that that has said that to me so far. You could you could tell the difference between the level of development and expectation with him.”

It wasn’t just Larry Johnson that impressed Kenneth Grant. The Buckeyes left no stone unturned over the weekend — and the uncommitted player felt a unique level of commitment to him. 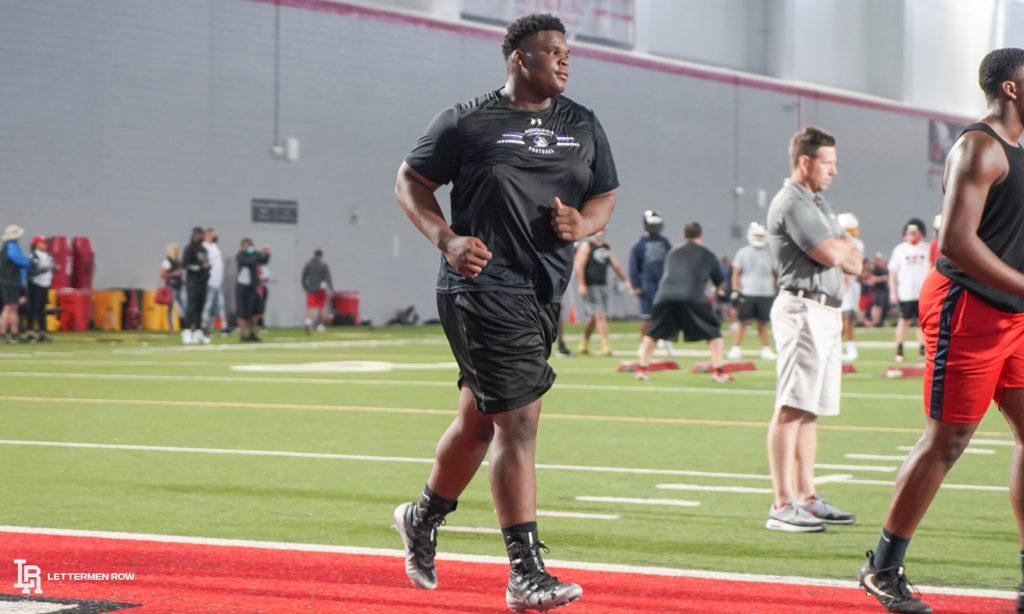 Kenneth Grant is a 6-foot-5, 340-pound defensive tackle unlike anything else the Buckeyes have on their roster. (Birm/Lettermen Row)

“The whole visit was great,” he said. “It was different from other schools. They did different things. Honestly they just run their official visits different. They actually took the time to show me how I could develop over the next three, four years, on the field and in graduation. I’m not committed to them, so it says a lot they’d go that far for me. I know they’d do even more to show me if I was.

“At one point committing this weekend was in my head, but it was probably just the excitement of the visit. I had to level back down and really take my time. Antwuan Jackson was my host, and he told me to make sure I really know that I found the one. He let me know that it’s OK to take my time and make the right choice.”

The trip to Ohio State was the second official visit for Grant. His first was to Wisconsin. His third will be to Michigan at the end of July. Ohio State left a big impression and left him with no unanswered questions.

“I just wanted to find out how things are run there,” he said. “The academics, the football program, how the players get to enjoy downtime or study time. I know there’s going to be hard work, but I wanted to talk to people and see how things are there. How available are all the resources to me?

“They did a great job explaining things. I got all my questions answered and they walked me through everything. It was pretty great.”