Ohio State football recruiting can be a wild ride full of twists and turns as recruits from all over the country maneuver their way to signing day. Lettermen Row is here to help navigate the tumultuous roads by getting to the heart of the matter with the young football players and Ohio State coaches and staff members themselves. This morning’s guest is Georgia wide receiver Kojo Antwi, who has just announced where he’ll play college football.

COLUMBUS — Four months ago, Kojo Antwi was ready to end his recruitment — andÂ at least temporarilyÂ he had eliminated Ohio State from his list of possibilities.

That last roughly an hour or two. The 4-star receiver from Lambert (Suwanee, Ga.) High School got a phone call from Buckeyes receivers coach Brian Hartline that day when the story hit social media. After the chat with the Ohio State assistant, Antwi told Lettermen Row that things weren’t quite so cut-and-dried.

â€œOhio State is not out of it, I promise,â€ Antwi said. â€œIâ€™m pushing my commitment back.â€

The decision to push a commitment back meant more time for Hartline and the Buckeyes to grow their relationship with Antwi. As has been the case at nearly every turn since he took over as the full-time receivers coach for Ohio State in the summer of 2018, that was all Hartline needed to put himself and the program right back into the thick of things.

But there was still plenty of work to do. Ohio State had plenty to overcome in the recruitment of the 6-foot, 190-pound Antwi. He’s from Georgia and was getting a hard sell from the Bulldogs. He has family ties to the Houston area, and there was a steady push to attend Texas A&M as a result of that. Alabama started calling a lot, and it’s always hard to say no to the Crimson Tide. 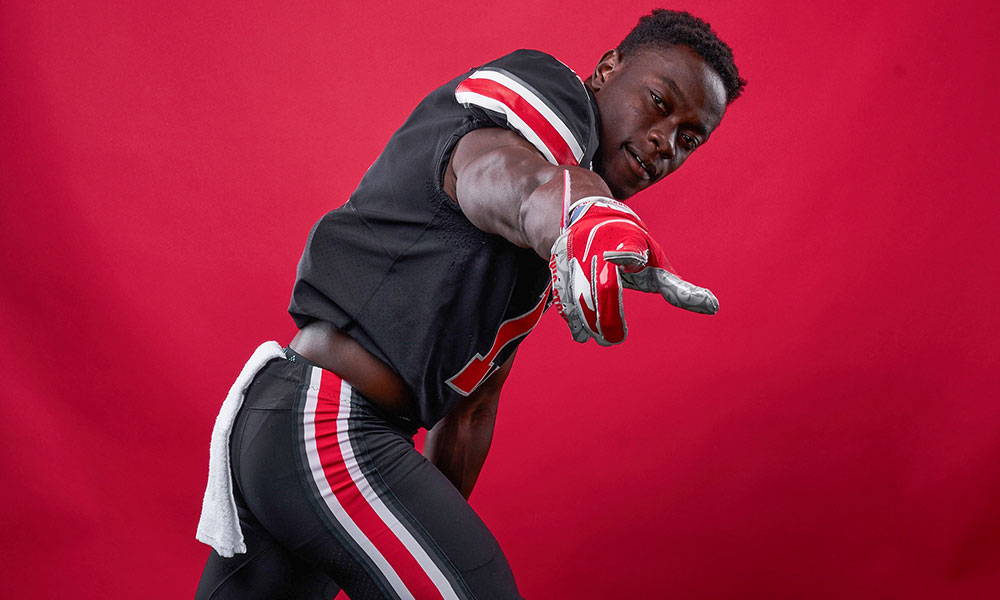 Ohio State had been pointing to Kojo Antwi as a top priority for months. (Kojo Antwi/Courtesy)

Ohio State needed an official visit from Antwi to believe there was aÂ real chance. There were some who questioned whether or not he’s take his planned visit over the June 18 weekend after the Buckeyes took a third receiver in the Class of 2022 — Kaleb Brown — just 11 days earlier. The visit went on as planned. And as Hartline had told Antwi for months, the Buckeyes were treating him like a high-priority target.

â€œCoach Hart is a very genuine guy,â€ Antwi said. â€œHeâ€™s all about details when heâ€™s coaching, and thatâ€™s what I love about him. He was so real with me, straight up the whole time. I got to hang out with Emeka and Jaxon Smith-Njigba the most, but the whole receiver room was cool. I had a chat with almost all of them. Itâ€™s so much about being a family there.â€

Antwi left Ohio State on June 20 knowing he wanted to be a Buckeye. The back-and-forth, upside down recruitment is now over.

What ultimately turned Kojo Antwi to Ohio State? Why did he almost eliminate them in March? How did he and Emeka Egbuka connect while he was in town?

The 4-star Georgia prospect joined Birminology on Lettermen Row to talk about his big decision.