COLUMBUS â€” Ohio State knew it had to make a big impression on receiver Kojo Antwi when the Georgia standout finally arrived on campus.

“From the coaches to the players,” Antwi told Lettermen Row. “Even with the campus, I was just impressed with everything.”

As we wrote on Sunday morning, one of the keys for Ohio State this weekend was getting the 6-foot-1, 185-pound Antwi around the Buckeyes other receivers. Hosted by Emeka Egbuka, Antwi was happy to spend time with the Ohio State receivers room, especially third-year assistant coach Brian Hartline. The direct, no-fluff approach from Hartline was refreshing to the country’s No. 16-ranked receiver.

“Coach Hart is a very genuine guy,” Kojo Antwi said. “Heâ€™s all about details when heâ€™s coaching and that’s what I love about him. He was so real with me, straight up the whole time. I got to hang out with Emeka and Jaxon Smith-Njigba the most but the whole receiver room was cool. I had a chat with almost all of them. It’s so much about being a family there.” 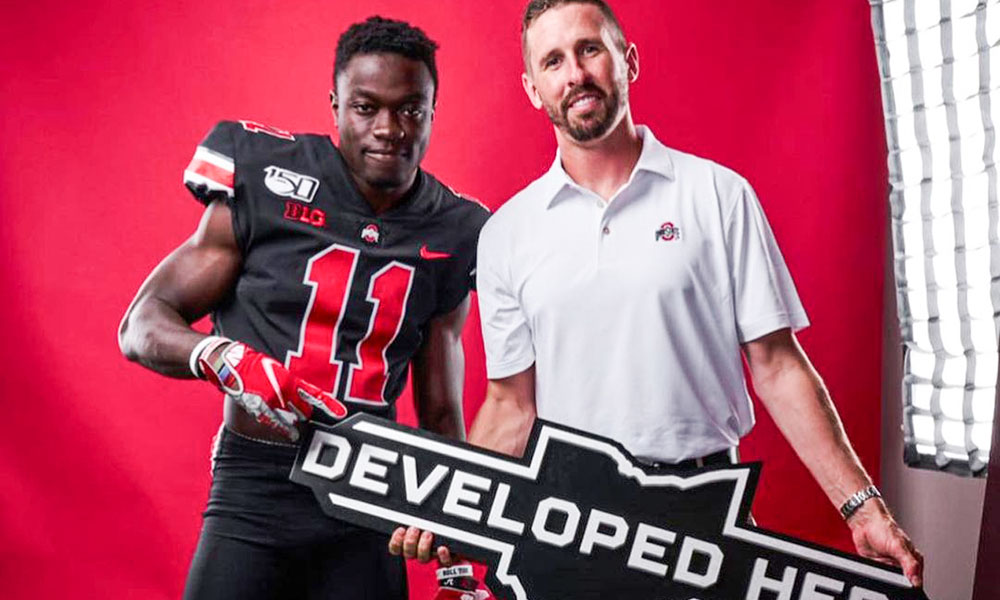 Brian Hartline made a big move in the recruitment of Kojo Antwi on his official visit. (Kojo Antwi/Twitter)

For the Buckeyes, showing the Georgia standout that there was more to the school than just football was key. Antwi’s family is very focused on academic pursuits and Ohio State was sure to put its best foot forward for the receiver and his family.

“Something that really surprised us,” Antwi said. “Was how good their computer science program was. I always knew Ohio State had good academics but I didn’t know how good that program was in particular.”

There’s a July 5 commitment date in the works for the Georgia receiver. He has made official visits to Georgia, Texas A&M and Ohio State and will visit USC officially next weekend. There’s also been an unofficial visit to Alabama in early June. The Bulldogs, Buckeyes and Aggies each have aÂ 247Sports.com crystal ball prediction in their favor at this point. Whatever Kojo Antwi is thinking, he’s not giving many hints. He will say however, that Ohio State left a big-time first impression, especially Ryan Day.

“I really wanna keep this commitment low key,” Antwi said. “I’m trying not to really give anybody any guesses on where Iâ€™m committing. But Ohio State was great. My family loved Coach Day as a coach and as a person,. We had about a thirty-minute talk before we left campus and it was great. Itâ€™ll be very tough making a decision especially after this visit with Ohio State.”

The Buckeyes and everyone else will have the answer in two weeks.