COLUMBUS — The version of Mike Weber that was promised has finally arrived.

Ohio State almost never had a chance to see it.

Injuries twice robbed the running back of seasons to really showcase his potential, and the rise of another star rusher while Weber was struggling to get healthy a year ago nearly pushed him out the door. Maybe this healthy, confident, quicker Weber would have been able to roll the dice with the NFL Draft last spring and become a winner, but the decision to return instead sure looks like itâ€™s going to work out even better for both him and the Buckeyes.

And itâ€™s about to create a lot of problems for opposing defenses trying to slow down one of the most motivated tailbacks in the country, with Rutgers next on deck Saturday at the Horseshoe.

â€œI know my expectations for myself and I know what I can do,â€ Weber said. â€œI just have to go out there and do it for the team and actually show what I can do. Itâ€™s finally starting to show a little.

â€œItâ€™s just called hard work. I worked real hard after my freshman year. That offseason, I knew I was going to be a totally different back coming into [last season]. Then I got hurt, I came back another year to show people what Iâ€™m made of, and thatâ€™s just balling.â€

The ball is already rolling downhill for Weber this season, with the redshirt junior exploding for 186 rushing yards and 4 total touchdowns in the season-opening win last weekend against Oregon State.

Heâ€™s still in a timeshare with J.K. Dobbins in the backfield for the Buckeyes, and neither necessarily has an outright claim to the starting job for an offense that will continue to rotate and lean on both guys. But watching Weber patiently set up blocks, throw stiff-arms, juke defenders and find a higher gear to cruise to the end zone, itâ€™s clear heâ€™s living up to the hype that has followed him dating back to his recruitment — and was reaching a crescendo before a preseason hamstring issue derailed him last year.

â€œIt took me almost the whole season to get back to how I felt before I got injured,â€ Weber said. â€œI eventually got going towards the end of the year, but by that time the season was over with. I really wasnâ€™t myself even then.â€ 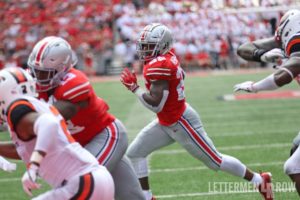 Physically it was clear Weber wasnâ€™t capable of being the kind of elite runner Ohio State expected as he struggled to regain his impressive combination of speed and power for much of last season. But it was less obvious until down the stretch that Weber was also having a hard time processing it mentally until his emotions spilled out after the Cotton Bowl victory when he sat largely silent in a corner of an otherwise boisterous, celebratory locker room.

Weber was already starting to wrestle with his next move, one which was going to be heavily influenced by what kind of role the Buckeyes were expecting of him if he returned alongside Dobbins. Given assurances by Urban Meyer that he would be an integral part of Ohio Stateâ€™s game plan as part of a one-two punch that allows the attack to play at a faster tempo, Weberâ€™s â€œ50-50â€ decision eventually tipped toward a return and one more shot to validate all the buzz.

â€œI mean, going through what he went through, that can be kind of hard on you mentally,â€ Dobbins said. â€œSo, Iâ€™m just glad to see him happy again. Heâ€™s more upbeat.

â€œIt means a lot, you know. Itâ€™s great to see him do that, because heâ€™s been working hard for it, and I hope he continues to do it.â€

Thereâ€™s still a long way to go, and Weber has obviously only done it once so far this season.

But the opener was a glimpse at the kind of weapon Ohio State has been hoping to unleash for years. And a whole lot more destruction could be coming.

â€œHopefully Iâ€™ll stay healthy and do what I can to help the team win. That was my main goal, and itâ€™s one down right now.â€

Expect a whole lot more of them to follow as long as this version of Mike Weber is around for Ohio State.