COLUMBUS — Oops, they did it again.

The NCAA voted on Wednesday about whether or not to extend the now year-long dead period, and to no one’s real surprise, they opted to extend it once more — for all sports — through May 31.

The primary rational seems to be that extending the dead period would mitigate additional risk factors for athletes currently participating in spring sports, meaning that those sports could wrap up hopefully without further interruptions. The main goal of the next six weeks will now be, according to the Division I Council, to formulate a plan that allows for a safe return to recruiting on June 1.

“There is a strong commitment to use the next several weeks to outline the transition plan back to recruiting activities post June 1,” Chair M. Grace Calhoun, the AD at Pennsylvania, said. “And to provide those plans to prospective student-athletes, their families and the NCAA membership no later than April 15.â€

Of course, now that we’re a year into these dead periods, one could be forgiven if they wondered what the hell these committees have been doing for the last ten months or so. Even that word salad from Calhoun offers little guarantee that a planÂ will be sorted out, rather that there will be a commitment toÂ outlining a plan.

No one is suggesting that the NCAA or its members look the other way when it comes to Covid-19 protocols or CDC recommendations. No one wants to put anyone at risk, period. But this doesn’t have to be a one-size-fits-all solution, and that’s where things get frustrating for young men, women and families around the country who are trying to sort out their futures and explore the opportunities that they’ve been working their butts off to earn.

“It doesn’t make sense,” recent Ohio State offer Jake Pope tweeted Thursday morning. “How we are supposed to be able to make a lifelong decision when we canâ€™t even go see any of the campuses and coaches in person?” 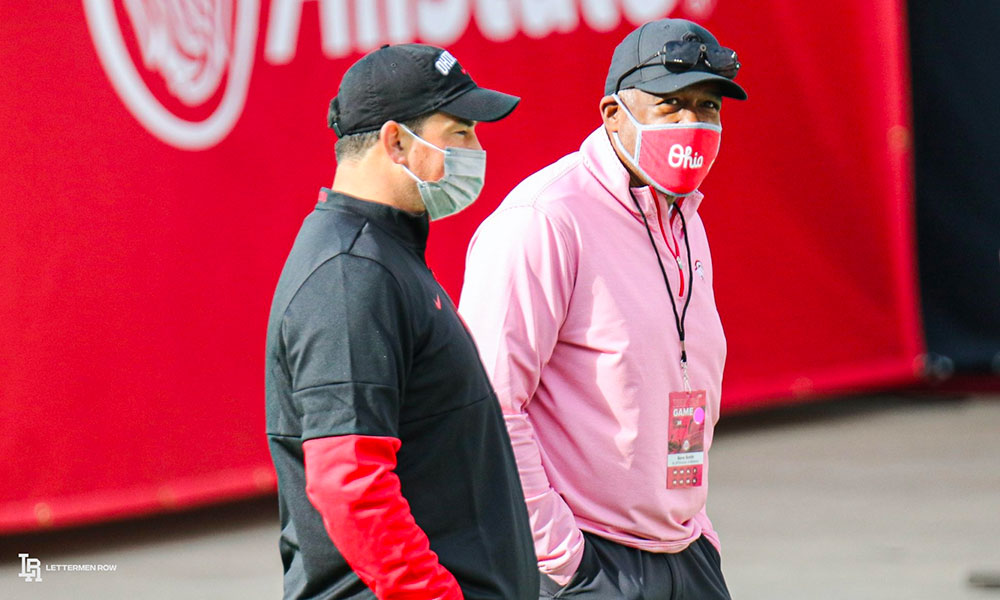 While it seems silly to get up in arms over this topic to those who’ve had their lives irreparably damaged or changed by Covid, this does matter to a lot of young people around the country. They know that life will go on and all that, but come on. We’re now looking at 15 months without recruits getting to see schools all while college football seasons happened — with fans in attendance and while other divisions have allowed visits?

For the administrations running the big money Division I schools to suggest schools canâ€™t safely host recruits is disingenuous at best and likely entirely financially motivated, trying to balance budgets impacted by revenue losses in the last year by cutting the legs of the young people who will beÂ the reason future budgets are so grandiose.

There’s no valid reason a limited number of football prospects couldn’t make visits while basketball, baseball and softball are in season — or why those sports couldn’t have hosted a couple prospects every week or so during the football season. The general student populations aren’t back on campus, and those coaches are isolated from other athletic programs anyway.

“Itâ€™s just really frustrating,” Ohio State 2022 commitment Bennett Christian told Lettermen Row. “It feels like the NCAA doesnâ€™t understand, or care, how recruits feels during all of this. A lot of guys are waiting for visits to make a decision. And without that opportunity, a lot of guys are going to have to make a blind decision.”

It’s not just the players making blind decisions, either. Schools are forced to take prospects that they’ve not been able to evaluate or work with in person, and that’s going to lead to even more transfers and program upheaval, something that’s already become an almost unmanageable problem in the last year.

The numbers don’t add up.

The thing about Zoom-built relationships is that they’re just as easy to zoom away from.

“I guess weâ€™re closing in on a year since weâ€™ve had recruits on campus,â€ Ohio State coachÂ Ryan Day said in a recent press conference. â€œWhich is amazing.â€

It is amazing. It’s an amazing testament to the commitment that coaches, players and families make to keep things moving somewhat normally in a time when nothing is normal. That won’t last forever, and eventually the people in charge of the schools — the members of the NCAA — will need to ask themselves if they truly care about the best interest of the people it is supposed to represent.

The decision by the NCAA, while expected once it was recommended last week to extend the dead period again, still sucks for kids and their families.

Here’s hoping that the commitment to preparing a plan leads to actual action ahead of June 1 and not just more meaningless words.

Another lost evaluation summer for prospects and programs around the country would be very bad for everyone involved.