Stay in touch or be left out because Ohio State recruiting is a 24-hour, seven-day-per-week obsession. What’s the latest news as the Buckeyes build for the future? Get that and more Sunday through Thursday on Lettermen Row. Today’s notebook focuses on a handful of in-state linemen waiting for a chance to land an Ohio State offer.

The Buckeyes are searching far and wide for talented offensive linemen in the Class of 2022, and there are a couple kids inside of their home state who have been on the radar for a while now. One of them is Olentangy (Powell) Liberty 3-star prospect Carter Smith, a 6-foot-6, 275-pound offensive tackle who has recently picked up offers from Ole Miss, Indiana, Northwestern, Georgia Tech and more than a dozen others.

Smith has been talking with Buckeyes staff member Ed Terwilliger since the start of his junior season but recently heard from Al Washington, who recruits the Columbus area for Ohio State.

“Itâ€™s just really cool to have them reaching out,” Carter told Lettermen Row on Wednesday. “The message is that theyâ€™re excited about me and they want to see me at 280 or 285 pounds, so thatâ€™s my goal for the next few months.”

Smith is currently at 275 pounds, but seeing him in person, he looks thinner than that and has a frame that would comfortably hold at least 315 pounds by the time he’s playing on a college offensive line. He’s got an athletic background — his mother Carlyn played volleyball at Bowling Green and is a former MAC Player of the Year, while his father Andy spent time in the New York Yankees minor league system — and plays volleyball as well as football. His parents have helped him through the process to this point, but it’s clear that the process is really just getting underway, the newness and excitement of the Ohio State staff being in contact is still feeling surreal.

â€œItâ€™s dream come true Iâ€™ll tell you that,” Smith said. “Watching the players Iâ€™ve looked up to for so long, to get a chance to live what theyâ€™ve lived through is unreal. I know they are hoping to see me in person soon.”

Another talented 2022 lineman who has been in contact with Ohio State — for a bit longer than Carter Smith — is Ryan Baer from Eastlake North High School near Cleveland. At almost 6-f00t-7 and 305 pounds, Baer has the size the Buckeyes are looking for up front. But to this point because of Covid, he’s not been able to get in front of the Buckeyes staff and show them what he can do in person. That’s kept things moving slowly.

“I’ve been talking to Coach [Greg] Studrawa,” Baer told Lettermen Row. “He wants me to come down [to Ohio State] when this is over.”

Baer has 16 offers and has been linked pretty closely to Cincinnati and Kentucky. The message from the Buckeyes offensive line coach is straightforward: They need to see him work to properly evaluate him.

“They want to see how well I can move and bend,” Baer said. “Just told me to keep playing hard and physical.”

There’s no doubt that Kettering Archbishop Alter defensive tackle Derrick Shepard is happy in his early commitment to Cincinnati, but the Buckeyes are still keeping tabs on the 6-foot-3, 295-pound lineman.

“I’ve talked to them a little bit,” Shephard told Lettermen Row on Wednesday. “Just them checking in on me.”

Larry Johnson has not had a chance to see Shepherd in person because of the pandemic, but he’s been working nearly every day with former Buckeyes lineman Robert Landers, who trains both Shepard and teammate C.J. Hicks. That’s given the Bearcats commit a taste of what Johnson teaches, and upon seeing him on Wednesday, it was easy to tell that he’s taking to the training. Shepard looks considerably slimmer and in better shape than when Lettermen Row saw him last at the UC Camp outside of Columbus last summer. He appears to be taking to heart the message that he has to keep his motor running hot on the football field. 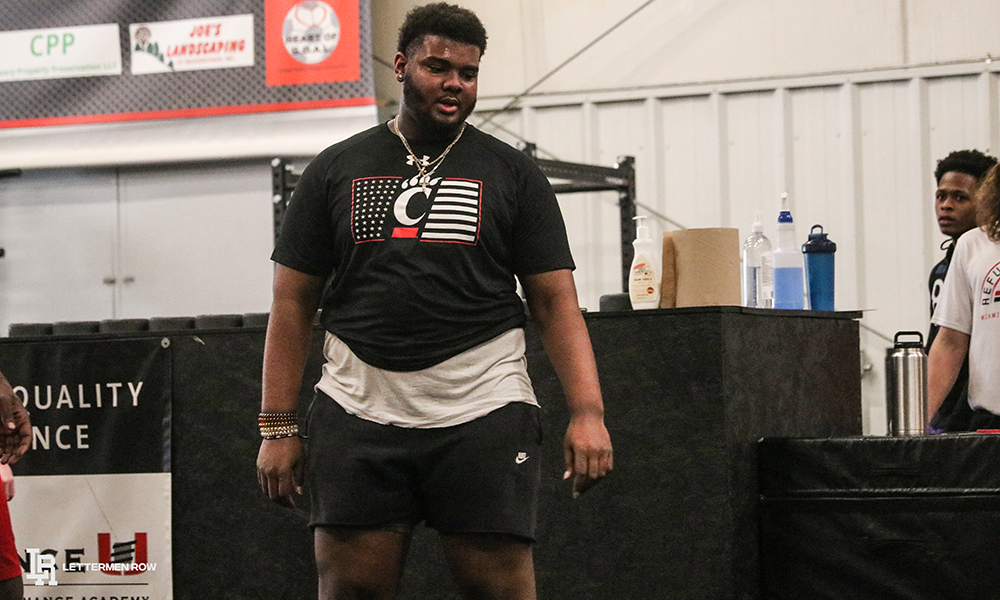 Derrick Shepard has changed his body since the summer. (Birm/Lettermen Row)

There’s no doubt that an Ohio State offer, if it were to come, would be intriguing for Shepard. But for now the country’s No. 22-ranked defensive tackle is focused solely on getting better so he can be a dominant 3-technique defensive lineman at Cincinnati.

Staying in Ohio and sticking with linemen waiting for a chance to be seen by the Buckeyes, Findlay standout Luke Montgomery’s recruitment has taken a major turn in the last month-plus. The 6-foot-5, 265-pound sophomore — who is being recruited on both sides of the football — has picked up offers from Notre Dame and Michigan recently, adding those two big-time programs to a list that already included Penn State.

Ohio State has not been on that list, and he thinks he understands why.

“It’s probably because I am from Ohio,” Montgomery said. “They want to see me in person, all they’ve seen is me playing basketball.”

We first mentioned Montgomery on this site a full year ago, and he’s seen his stock improve dramatically since. Now the hard question becomes for Ohio State: How long can they wait before other programs begin to make real progress in their efforts to lure him? Penn State is an early favorite, and the offers from Notre Dame and Michigan will turn heads no matter what. So the Buckeyes are going to have to find some way to increase communication at the very least. That is supposed to happen this week.

“I’m supposed to be talking to Greg Studrawa sometime this week,” Montgomery said. “And a coach from Florida State.”

Montgomery has grown close with a number of Buckeyes targets, and he and fellow 2023 prospect Brenan Vernon have plans to work out together when the weather turns.