COLUMBUS — Everything starts at quarterback for Ohio State.

And if somehow the spotlight wasn’t burning hot enough already, the possibility of adding a fourth talented prospect to the nation’s most intriguing position battle could turn it scorching.

The Buckeyes had a tentative plan in mind for how to handle the passers and when third-year coach Ryan Day would like to name a starter. And while the former couldÂ require a tweak, the latter figures to remain unchanged as the reigning Big Ten champions open training camp on Wednesday morning.

â€œIâ€™m not going to put a date on it,â€ Day said at Big Ten Media Days. â€œBut youâ€™d like to have it [decided] by the first two weeks of the preseason in a perfect world, so that you can start to get the reps ready to play in that first game. But even still, weâ€™re still going to spread the reps around. There are going to be three guys in this thing all the way to January or as long as we can play.

“But I guess if youâ€™re looking for a kind of a ballpark, it probably be about two weeks in the camp.”

Managing the quarterbacks is clearly the first order of business for the Buckeyes as they try to get back to the College Football Playoff again. But it’s certainly not the only looming question as Ohio State gets the pads on again with an eye on the season opener at Minnesota one month from now. As always, Lettermen Row is gearing up for the first practice of camp with Five Questions for the kings of the Big Ten. 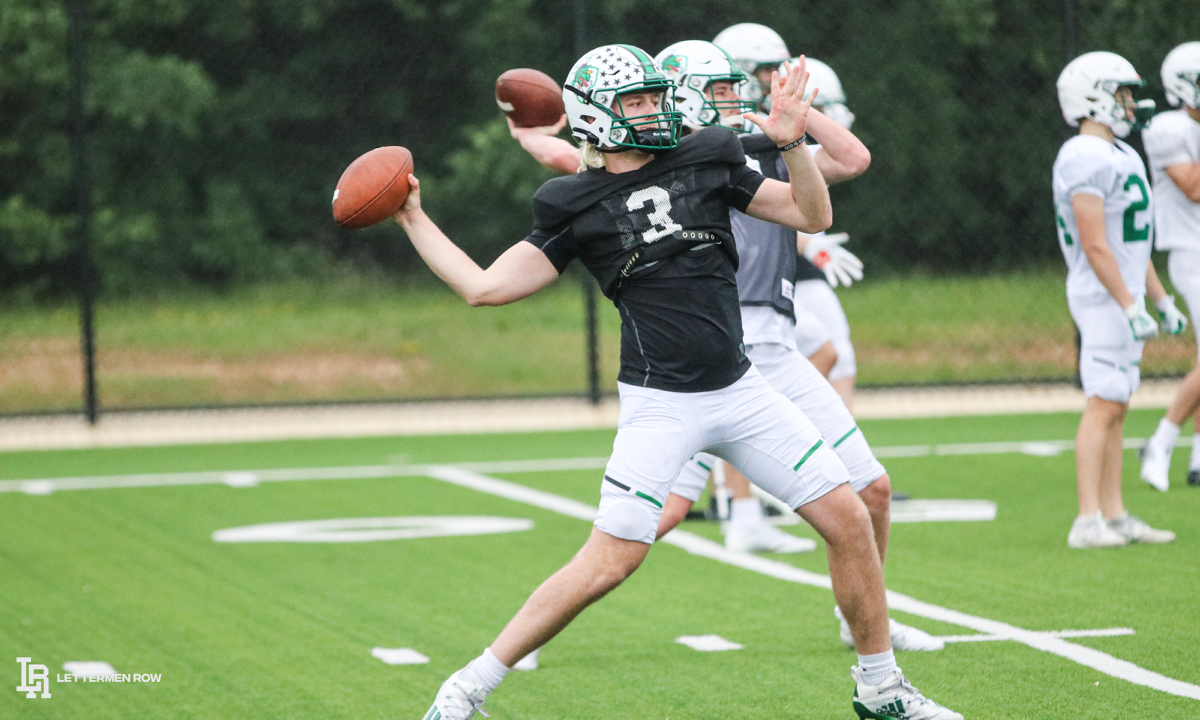 What happens if Quinn Ewers enrolls at Ohio State early?

In the short term, Ohio State has plenty of other questions that are more pressing when it comes to chasing down a national championship. But there is nothing more intriguing than the pending decision of five-star quarterback Quinn Ewers, which if nothing else could shake up the long-range blueprint at the most important position on the field — but could also wind up impacting the depth behind presumptive starter C.J. Stroud. Multiple sources with knowledge of the process described the situation as a true toss-up over the weekend, and Ohio State wasn’t pressuring Ewers either way. Eventually the Buckeyes were going to lose at least one of the talented quarterbacks in a loaded room, but there wasn’t an expectation that could happen right away with all three of the guys who competed in spring sticking around to battle in training camp. But the arrival of Ewers could accelerate the timeline and thought process for anybody who doesn’t win the top spot or the backup job.

Nothing has changed since C.J. Stroud pulled ahead as the backup last season, stayed at the front of the line during spring camp and then started putting his leadership stamp on the program during throwing sessions over the summer. There is a strong push coming from Kyle McCord for the job, but Stroud seems close to a lock to take the first snap of the season for the Buckeyes. So far, the California native has done everything possible to validate his five-star recruiting status — except throw a pass at the college level in a live setting. More than anything, the lack of game experience is why Ryan Day will need to get his next starting quarterback as many first-team reps as possible in August. 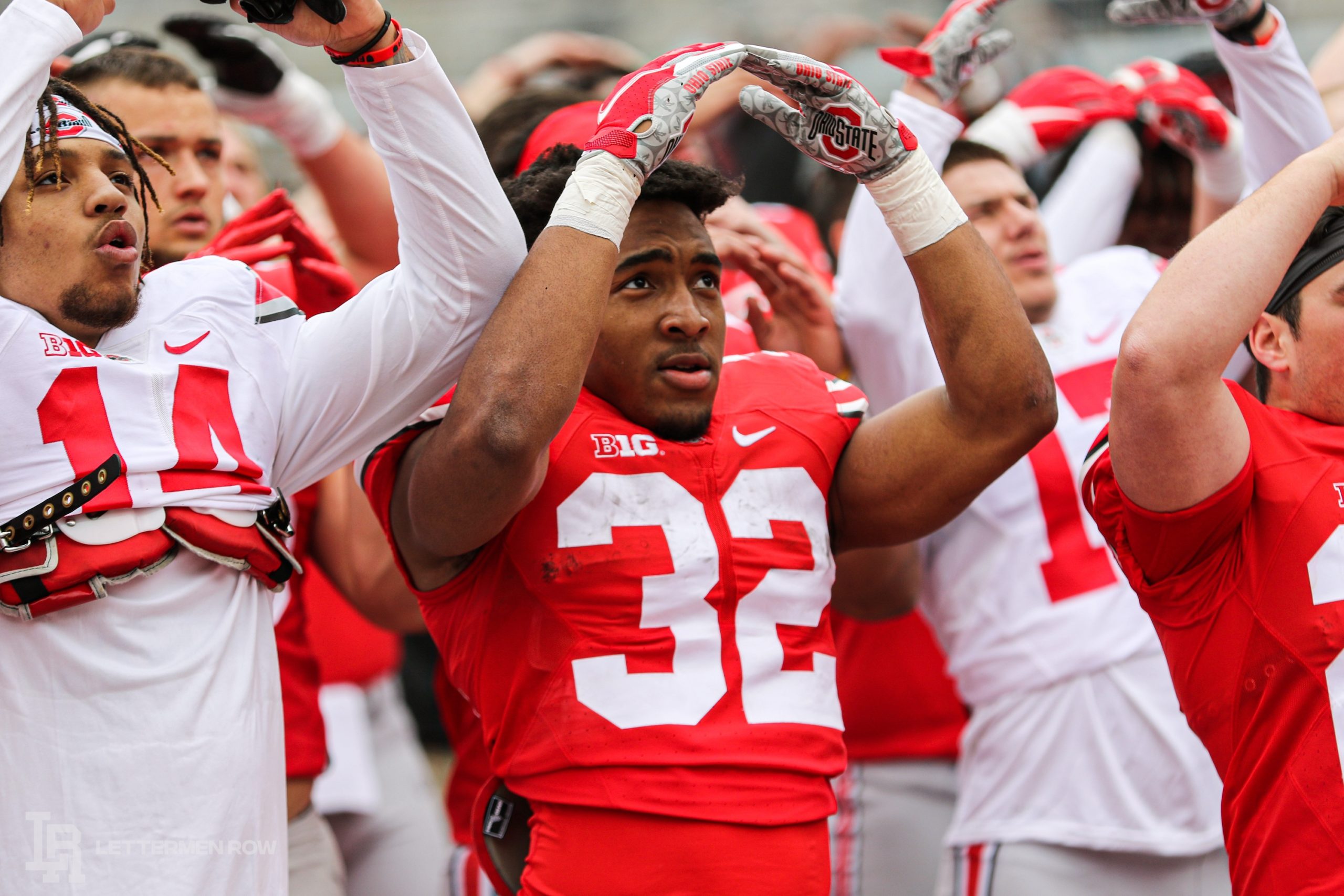 The Buckeyes have a proven commodity returning in the backfield. But they have also likely seen the ceiling for Master Teague, which has cracked the door open for a fascinating race to take over the top spot on the depth chart — and a potentially tough decision for position coach Tony Alford about how to use all the talent he’s recruited. Miyan Williams showed impressive flashes late in his freshman season and a healthy Marcus Crowley can be a dangerous weapon, and those two will have a legitimate shot at the gig. The guy to watch, though, might prove to be five-star freshman TreVeyon Henderson after his jump-start during spring camp. Henderson appears to be a special prospect, and it wouldn’t be a surprise if he bursts out of the gate right away just like J.K. Dobbins once did as a true freshman.

How quickly can J.T. Tuimoloau get up to speed with Buckeyes?

The epic recruitment is over after spilling into the summer, and now J.T. Tuimoloau can focus solely on football. Missing out on spring camp isn’t a deal-breaker when it comes to earning early playing time. But it likely does put him behind fellow five-star defensive lineman Jack Sawyer in the pecking order and will force him to play a little catch-up as he learns the ropes for the first time. Famed defensive line coach Larry Johnson isn’t afraid to turn his talented youngsters loose, and he’s still got a full month to get Tuimoloau ready for action. If the transition is as smooth on the practice field as Ohio State expects, the Rushmen rotation could get even deeper in September.

There isn’t a ton of uncertainty up front for the Buckeyes, which is significant since the offensive line is trying to protect a first-time quarterback ahead of a challenging couple weeks to start the season. Thayer Munford and Nicholas Petit-Frere return as perhaps the nation’s best tackle tandem, Harry Miller has a year of experience under his belt as he moves to center and Paris Johnson will fill one guard spot with his massive upside. That leaves a heated race for the final spot in the lineup, and Ohio State has no shortage of quality candidates. Matthew Jones has earned Champion grades during spot starts in the past, Josh Fryar had a dynamic spring camp, Luke Wypler is gaining momentum on the interior and Enokk Vimahi has the ability to be a factor as well. The Buckeyes often talk about rotating blockers, and they have the flexibility to do so this season without question. But that top unit needs to develop chemistry to perform at the highest level, so eventually it will need to settle on the fifth guy to lead the way.