I keep hearing about togai on the 2 deep but what about Vincent the higher recruit? Is this more about togai being on campus and not Vincent? Will it change when Vincent gets to campus?

So much for defensive tackle being a position of concern at Ohio State, right? There was a time when it seemed like the Buckeyes were going to need newcomers like Tommy Togiai, Taron Vincent and Antwuan Jackson to play significant roles right off the bat, whether they were ready or not. But with Dre’Mont Jones and Robert Landers turning in impressive springs and Davon Hamilton and Haskell Garrett pushing for more action, the Buckeyes were actually so comfortable with the depth their that they could afford to move Jashon Cornell out to the edge.

Of course, a major factor in that process was the splashy debut of Togiai after enrolling early and getting his black stripe removed even before his first training camp. That might not seem like that big of a deal to some, but with Urban Meyer, that’s a significant signal that Togiai has something special and will be prominently in the rotation this fall. What does that mean for Taron Vincent? 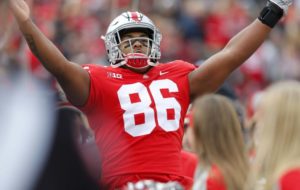 First of all, it’s certainly meaningful for a guy to get those workouts in March and April under his belt, and Togiai does have a head start over Vincent. That doesn’t mean that the nation’s top recruit at defensive tackle won’t be able to make a similar instant impact by any stretch of the imagination, but it can be a bit tougher to jump right in during training camp when the Ohio State coaching staff tends to start having more focus on getting ready for the opener than getting true freshmen up to speed.

It’s also worth noting that Togiai isn’t solely benefitting from being able to report to Ohio State in time for spring practice. While Vincent does come in as the No. 1 ranked player at defensive tackle, Togiai was obviously no slouch checking in just two spots behind him as a four-star recruit as well. The combination of his talent and the opportunities in March and April are what give him the edge on the depth chart at this point — now it’s up to Vincent to show why he was a five-star to try to close the gap and fight for action on a unit that suddenly looks to be one of the strengths of the team.