Ohio State football recruiting can be a wild ride full of twists and turns as recruits from all over the country maneuver their way to signing day. Lettermen Row is here to help navigate the tumultuous roads by getting to the heart of the matter with the young football players themselves. Birminology shows who the young men being recruited by Ohio State truly are — by talking to them. Today’s guest is Jakob James, one of the six offensive linemen committed to Ohio State in the Class of 2020.

At the conclusion of his sophomore year in high school, Cincinnati Elder standout Jakob James strolled into an Ohio State one-day camp weighing about 240 pounds and looking much more like a tight end than a Power Five-type of lineman.

His talent was never in question, though. How could it be? James comes from a family of college football players, almost two dozen of them. He is a coaches son who’s learned the ins and outs of the game from an early age. Still, Urban Meyer and offensive line coach Greg Studrawa wanted to make sure that the cerebral talent from the Queen City had a different kind of ability: Putting on weight and proving he was able to be a college offensive lineman.

Five months later, the 6-foot-4 James had bulked up to almost 275 pounds. But Meyer, who had given him a scholarship offer contingent on that weight gain, was riding off into he sunset and handing over the reins of the program to Ryan Day. It didn’t take long for Day to follow up on Meyer’s original wish, confirming an opportunity for James to play at Ohio State. 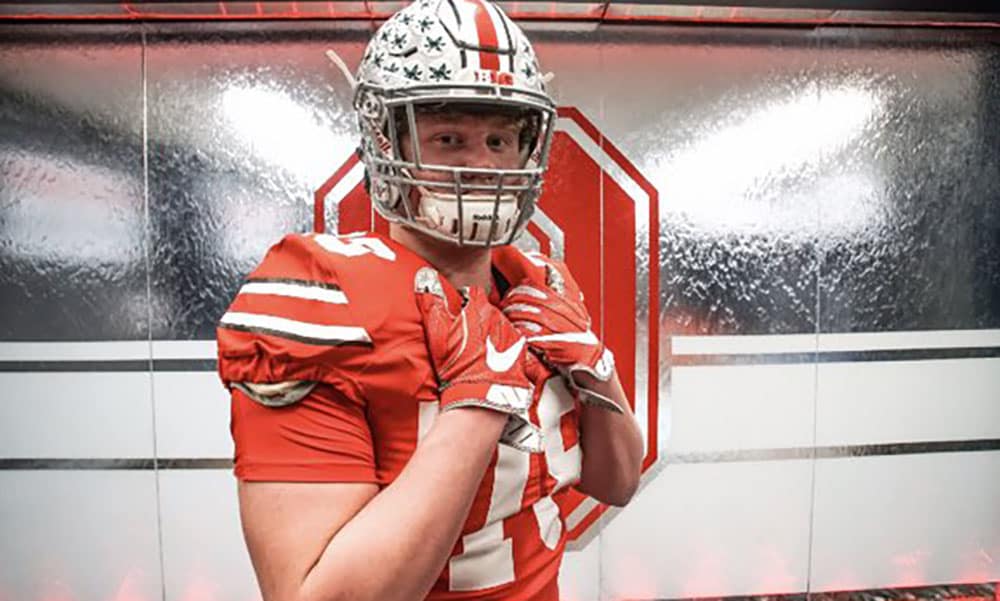 It took even less time for Ohio’s 16th-ranked prospect to accept.

James committed to the Buckeyes in January and set himself up to follow in the footsteps of a pair of family members who have previously suited up for the program. His uncle Dan was a member of the Buckeyes 1959 national championship team and went on to play seven seasons for the Pittsburgh Steelers. His cousin Tim also played for Ohio State, suiting up for the Buckeyes in the mid-1980s under Earle Bruce.

â€œItâ€™s an honor and a privilege that I have grown up learning about,” James said. “Having family that have both worn the scarlet and gray and are fans.”

Now it’s Jakob’s turn to prove once again that he belongs. His national ranking and 3-star status, a byproduct of national analysts never seeing him play at full-strength and current weight, drives him to put his best effort into what is a pivotal senior season for the Panthers star.

What else motivates Jakob James? What did Ryan Day do in his first visit to Elder High School that opened his eyes? Who is he recruiting now that he’s locked in with Ohio State? Has he fully recovered from an offseason shoulder issue that required surgery?

Get the answers to those questions and more this week’s edition of Birminology on Lettermen Row.