Ryan Day's first day as Ohio State head coach needs to be one of his best
Aritcle written by:

And while Riley’s tenure has been viewed as the gold standard of that type of coaching transition, Day should keep in mind at the start of his tenure what perhaps has kept Riley from even bigger heights.

In his first two seasons, he’s coached a pair of Heisman-winning quarterbacks — in part because the Sooners defense was so bad that possessions came quickly and stat-limiting blowouts were rare. But those elite offenses weren’t enough in the College Football Playoff, where Oklahoma lost 54-48 to Georgia in the Rose Bowl in the 2017 season and again this year when Alabama beat the Sooners in the Sugar Bowl, 45-34.

The main culprit? That would be oft-criticized defensive coordinator Mike Stoops, Oklahoma’s defensive coordinator under his brother and Riley’s predecessor Bob Stoops. There was nothing Riley could really do about the 2017 season. Bob Stoops retired abruptly in summer, leaving Riley little choice but to keep the staff in place right before the season. But that defense finished No. 67 in total defense and No. 68 in scoring defense, arguably costing a team with the No. 3 scoring offense (45.1 points per game) a better shot at a national championship.

But Riley kept Stoops in 2018 — until he couldn’t. After the Sooners gave up 48 points in a loss to Texas, Riley made a switch.

It was too little, too late for 2018. In-season staff changes rarely provide drastically different results — but could help the program going forward. The important takeaway is obvious: By keeping around a questionable holdover from a previous staff, Riley cost himself some good chances at a national championship. 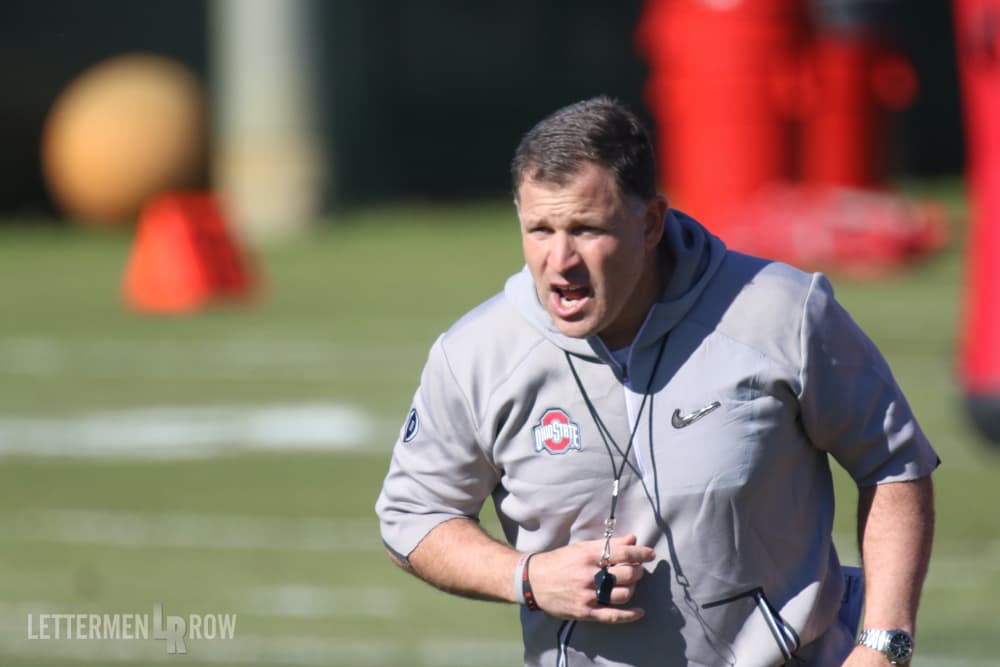 Ohio State could have a tough decision to make about defensive coordinator Greg Schiano. (Birm/Lettermen Row)

Now Day will face the same problem, only multiplied, and it’s imperative to his early success that he gets these choices right. No assistant on staff has a blood connection with Meyer — though son-in-law Corey Dennis is close — that can compare with what Riley faced. But the Ohio State staff has become increasingly populated by people with close connections to Meyer. Offensive line coach Greg Studrawa coached on Meyer’s Bowling Green teams. Linebackers coach Bill Davis stood in Meyer’s wedding as his best man. Defensive coordinator Greg Schiano has long been a friend of Meyer, and the two share close connections with New England Patriots coach Bill Belichick.

As fate would have it, those are the three assistants whose futures have faced the most speculation. The offensive line failed to field a natural center for the third straight season, instead forcing an all-conference caliber guard into a position he’d never played. The 4- and 5-stars that sat on the bench were either poorly evaluated or haven’t been developed; either one of those is largely the position assistant’s fault.Â The Buckeyes also missed on four in-state recruits in 2019, with those players choosing Notre Dame, Michigan and Michigan State (twice) over Ohio State. Studrawa also has a history of disinterest in recruiting.

Schiano’s defensive schemes were a source of criticism throughout the season, and his presence is further complicated by the fact that it could cause perceived rising star Alex Grinch to look elsewhere if Schiano’s role limits what Grinch can do in Columbus. Davis has presided over perhaps the most-criticized unit in recent Ohio State history, and prior to taking that role he hadn’t coached in college in decades.

While all of these sound like they might be easy decisions, they are not. You can’t get rid of a coach without needing to hire a new one, and replacing one coach with another who isn’t outright better is a downgrade when you factor in the continuity that is lost. Day’s coaching exposure is somewhat limited by his young age — he just hasn’t worked with a lot of coaches. That will be offset by Ohio State’s brand, but it’s still a gamble to hire a coach you’ve never worked with before.

Day’s already had his own timing misfortunes, though not ones that hamstrung him as bad as Riley’s first year. He had to sign a class of early signees with many not knowing if their position coach will still be here in January. He navigated that deftly but will still have to try to regain the loyalty of 4-star offensive line commitment Doug Nester, who is taking other visits and heavily considering Penn State. It’s interesting timing for other reasons, too. Waiting until after the Rose Bowl means Day’s first day on the job could be spent officially firing someone who was his peer a day before.

Ultimately, though, what’s best for the program long-term will be Day making tough decisions that need to be done. If he decides a current assistant is the best person for Ohio State, he’s earned the right to make that call with judgment reserved until this fall.

But it’s his program now, and tying himself to any person if the primary reason for keeping him is as a favor to his predecessor would be disastrous. The stakes are high, and Day needs to get these right.