COLUMBUS â€” Ohio State has a role-reversal this fall on defense.

Just one year later, the roles are entirely reversed. The Buckeyes have proven, talented defensive tackles returning, including All-American Haskell Garrett. Young players are showing they can anchor the next wave of Rushmen on the interior. That spot seems set for a massive, productive season.

The linebackers, meanwhile, are in a transition year while trying to remain playing at an elite level. And as they go through that, the success of each unit will be dependent on the other, even more so than usual.

“When you look now, you have Haskell coming back,” Ohio State coach Ryan Day said at Big Ten Media Days. “You have Antwuan Jackson, who had a really good offseason. Jerron Cage has brought some veteran presence there. Taron Vincent’s in there. Ty Hamilton hasn’t played a lot of football, but he’s now in Year Two. And then we have a couple young guys in there, as well, with Tyleik Williams and Mike Hall, who just got into town. So that is as deep as we’ve had there and this veteran is we’ve had, so we feel much better right now than we did at this time last year.

“But vice versa, at the linebacker level, a lot of unknown there. We lost for really good players and have to replace them. But the good news about that position is Dallas [Gant], Teradja [Mitchell] and K’Vaughan [Pope] have been in the program for a while now. So, you know, they’re right in line. Now they just need to take the next step. And then some of those younger guys have an opportunity to come in and make an impact as well: Cody [Simon] and Tommy [Eichenberg] and even Reid [Carrico]. So we’ll see.” 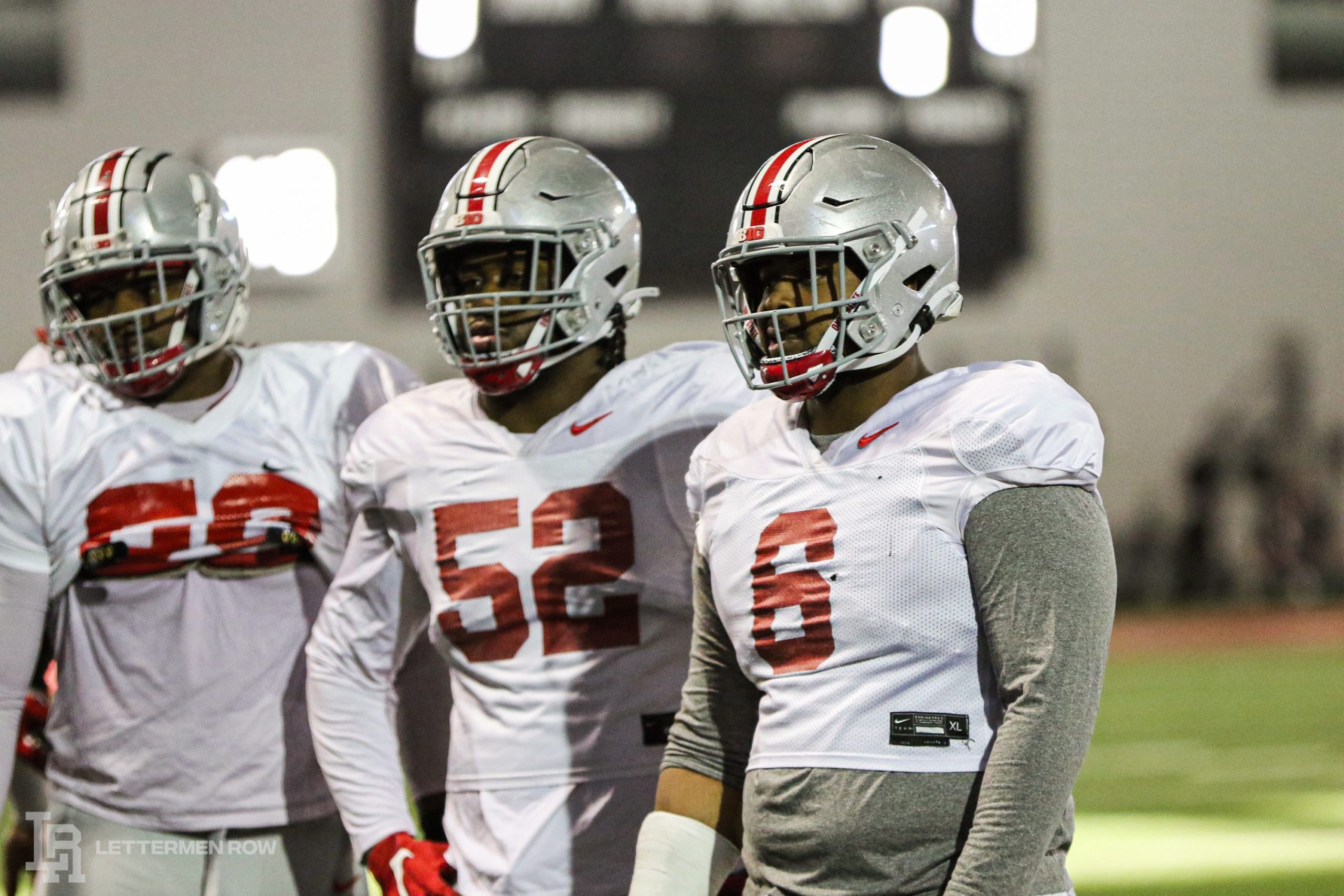 Taron Vincent and Antwuan Jackson will both be aiming to start on the defensive line. (Birm/Lettermen Row)

Garrett will be among the leaders of the entire defense. He’s a wrecking ball who can help the linebackers through their transition to new, more inexperienced players by being an All-American again. If Taron Vincent can become the five-star he was recruited as, the Buckeyes might have the best defensive interior in the country to lean on. Beyond those two, it’s a deep and veteran room.

Those factors will help the crop of new linebackers who will enter the starting fold and replace the talent that was lost.

Of course, the linebackers won’t be given a pass just because the defensive line will help them. They’ll still need to compete at an elite level if Ohio State expects to return to the national title game, where it lost badly last season.

But in the meantime, the Buckeyes will rely on their strength while figuring out who will emerge at linebacker this fall.

“[Linebacker] is kind of the unknown,” Day said. “Just like the defensive tackle was last year.”

The defensive tackles are no longer a mystery for Ryan Day and Ohio State. The interior of the defensive line could be the key to the Buckeyes success.