NEW YORK — Dwayne Haskins is heading back to work at Ohio State without a new trophy, but he’ll probably settle for the motivational fuel.

The Buckeyes got started with their preparations for the Rose Bowl without him for a couple days over the weekend. But the return of the record-setting quarterback now with a little extra to prove should kick things up a notch as attention starts to turn to Washington and New Year’s Day.

Haskins wound up finishing in third place in the Heisman Trophy voting, which seemingly qualifies as both a tremendous honor and somewhat disappointing for how he was overlooked after the most prolific passing season in Big Ten history. That’s over now, though, and all the redshirt sophomore can do is go put on one more show like the last couple to prove again that he deserved more credit.

How Haskins handled the spotlight is just part of what Lettermen Row learned after hanging around the Ohio State star for a couple days in the Big Apple. And to start another week of bowl preparations, let’s run through the list.

No matter how many times he was asked, Haskins continued to deflect any questions about his future and indicate it would be a discussion for after the Rose Bowl. Much like his NFL-caliber arm, Haskins also handled the media attention and constant speculation about whether he would be a fit for a team like the New York Giants like a true professional. The odds are certainly against him returning to Ohio State for another season since he has played himself into position to perhaps be the top quarterback taken, and the contract that comes with that honor includes a life-changing amount of money. But even after one social-media post that could have been interpreted as a sign Haskins was ready to declare for the draft, he maintained that decision would have to wait.

Dwayne Haskins is playing in the Rose Bowl

In this new era of players protecting their futures by skipping bowl games that don’t have any championship implications, it’s fair to ask if Haskins is considering that options. But since the moment the Big Ten title game ended and in every media opportunity since then, Ohio State’s quarterback has made it clear that he’ll be on the field. Citing everything from the importance of being there for his teammates to the prestigious nature of the Rose Bowl, Haskins has been emphatic that he’s going to be on the field looking to add to his single-season records against Washington. 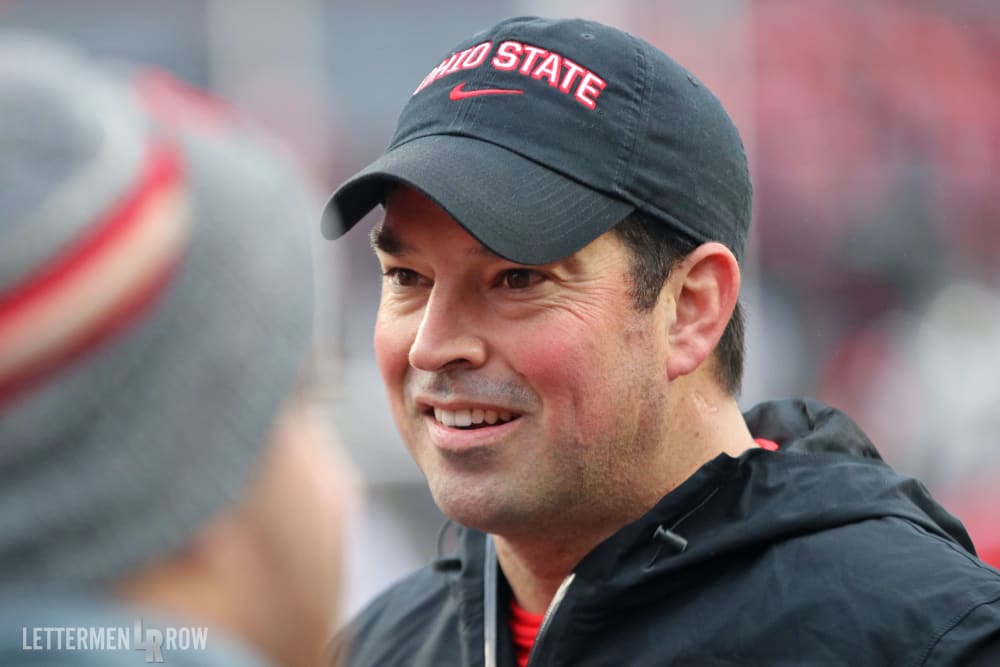 Ohio State coach Ryan Day is looking to complete his first coaching staff as the leader of the program. (Birm/Lettermen Row)

The decision was made back in Columbus, and it was a call for new coach Ryan Day to make. But count Haskins among those who came away impressed with the work Brian Hartline did as the interim wide receivers coach, another endorsement that validated the move to make him a full-time fixture of the program moving forward. Without the dynamic work of one of the best units of wide receivers in the country, Haskins probably wouldn’t have been in New York in the first place. And while he doesn’t work with Hartline directly, he mentioned more than a few times there was some helpful advice thrown his way from the former NFL wideout about the best ball placement or how certain routes should be handled by the quarterback. Keeping Hartline could prove to be a very smart move as Day takes control of the Buckeyes.

Corey Dennis could be option to complete coaching staff

Ohio State can go out and hire almost anybody it might target to fill the only current void on the coaching staff, one opened up by Urban Meyer’s retirement and Day’s promotion. Considering the opportunity to work at Ohio State, the money they can offer and the talent on hand to work with, there is plenty to sell for both experienced coordinators or up-and-coming assistants who would jump at the chance to work with Day. The Buckeyes should pursue those outside hires, but if they elect to look inside the Woody Hayes Athletic Center for a candidate, Corey Dennis would be the logical choice. Haskins praised the senior quality control coach for his help during the season as an extra quarterbacks coach along with Day, and that familiarity might work in favor of Dennis. How Day proceeds with his first group of assistants will be fascinating to watch as he sets the tone for his version of the program.