SCOTTSDALE, Ariz. â€” While all the attention is on the present at the College Football Playoff semifinal against Clemson, Ohio State received big news about the future of its offensive line.

Redshirt sophomore All-American guard Wyatt Davis will forego the NFL Draft and return to Ohio State for the 2020 season, he told Lettermen Row. Ohio State center Josh Myers also confirmed that he intends to return to for another season with the Buckeyes.

Myers, a redshirt sophomore, has emerged as one of the nationâ€™s best centers while Davis has emerged as a force on his right side.Â Both have been valuable leaders along the undefeated Buckeyes offensive line, and they’ll provide a huge boost for the unit heading into next season.

“Yes, I did [submit draft feedback paperwork], but I want to put out there that I’m returning next year,” Davis told Lettermen Row. “I haven’t received [feedback] yet. I’m still waiting on it just to see it. But, yes sir, I’m coming back.”

The Buckeyes could have lost Davis, center Josh Myers and left tackle Thayer Munford to the draft as underclassmen, but Davis and Myers became the first to reveal their intentions to return to the program whether the Buckeyes win a national title or not. Sources indicated to Lettermen Row that Munford didn’t submit his name for draft advice, either, likely hinting at a return for the veteran starter as well.

Their returns should provide stability to Greg Studrawa’s offensive line heading into the offseason, one that had the potential of losing all five starters from this season’s unit — and one that was a finalist for the Joe Moore Award, given to the country’s top offensive line. 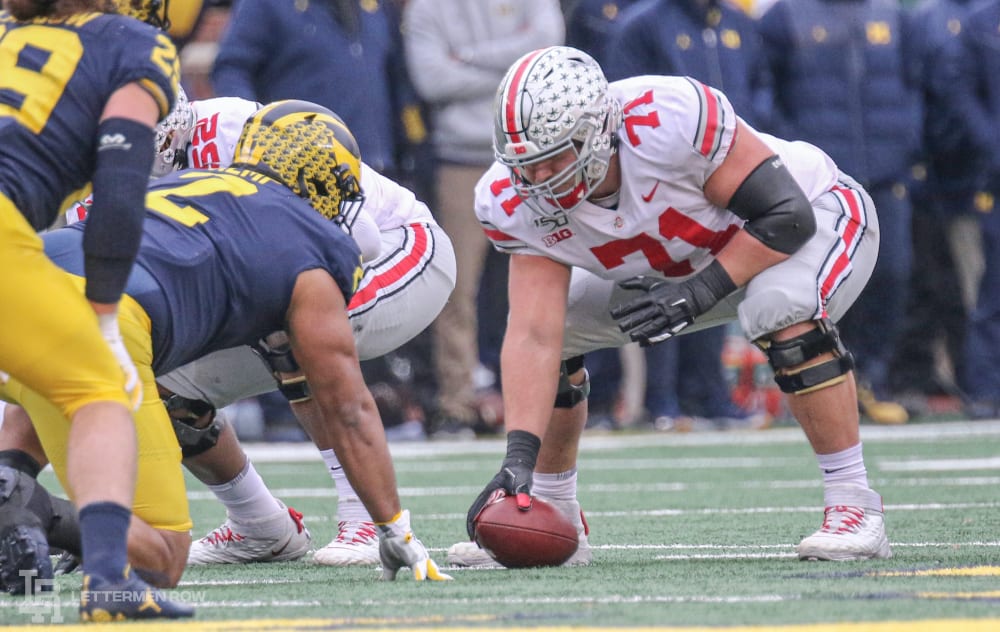 Josh Myers will return for another season at Ohio State. (Birm/Lettermen Row)

Davis could certainly still change his mind and declare for the draft if his feedback projects him as a first-round pick, because he’s not bound by anything at this point. Myers, meanwhile, didn’t even submit paperwork or an evaluation, instead opting to skip the entire process and pledge a return for the Buckeyes.

Now with Myers and Davis both in the fold for another run at Ohio State next season, the Buckeyes will wait on official word from Munford, who can declare for the draft if he chooses.

If all three return, Ohio State will be in a great place along the offensive line, only needing to replace seniors Jonah Jackson and Branden Bowen. And that would be easier than replacing all five.

Luckily for the Buckeyes, Josh Myers and Wyatt Davis appear to have made their decisions already. And it dramatically improves the strength of Ohio State heading into the future.