The summer offseason is in full swing, and Lettermen Row is trying to survive it with our annual Position Week breakdowns. By the time all nine units at Ohio State have been covered, training camp and media days will nearly have arrived â€” and the return of football in the Horseshoe will be just around the corner. Letâ€™s continue Defensive Line Week with a defensive end depth chart breakdown.

COLUMBUS â€” The drop in production was easy to see coming at Ohio State.

After a dominant 2019 season in which Chase Young was a Heisman Trophy finalist and the Buckeyes were as deep as they were talented along the defensive line, Ohio State wasn’t as productive at defensive end last year. Of course, Jonathon Cooper, Tyreke Smith and Zach Harrison and the rest of the unit were still good and certainly rattled opposing quarterbacks.

But they just weren’t as dominant as they were in 2019. That could change this fall. Ohio State defensive line coach Larry Johnson has confidence his unit will be back to its top form by September for the Buckeyes.

“I’m really excited about this group,” Johnson said. “I really am. … We’ve got four veteran ends returning. That makes it easier to really teach and move forward in our defensive scheme. So far, it’s been really great to watch those guys work.”

It doesn’t matter who is deemed the starter by Johnson. All five of Harrison, Smith, Javontae Jean-Baptiste, Tyler Friday and superstar freshman Jack Sawyer will play. But how will the depth chart officially break down? Lettermen Row is diving in to analyze one of the best groups of defensive linemen in the country.

Zach Harrison:Â This was always the path for Zach Harrison. He learned for two years while gaining experience and confidence. Now in Year Three, Harrison has developed into a leader of the unit, and it’s translating to success both on and off the field. Harrison re-dedicated himself to the weight room this offseason, becoming bigger, faster and stronger. His transformation has turned heads inside the Woody Hayes Athletic Center, and he’s gaining buzz outside the walls of the Buckeyes football facility.

Harrison flashed potential during his first two seasons. Now as a junior, he has a chance to become one of the country’s elite pass-rushers, cement himself as a can’t-miss NFL prospect and join a long line of defensive ends to come out of Ohio State before him. He’s on schedule to complete the three-year Ohio State plan. 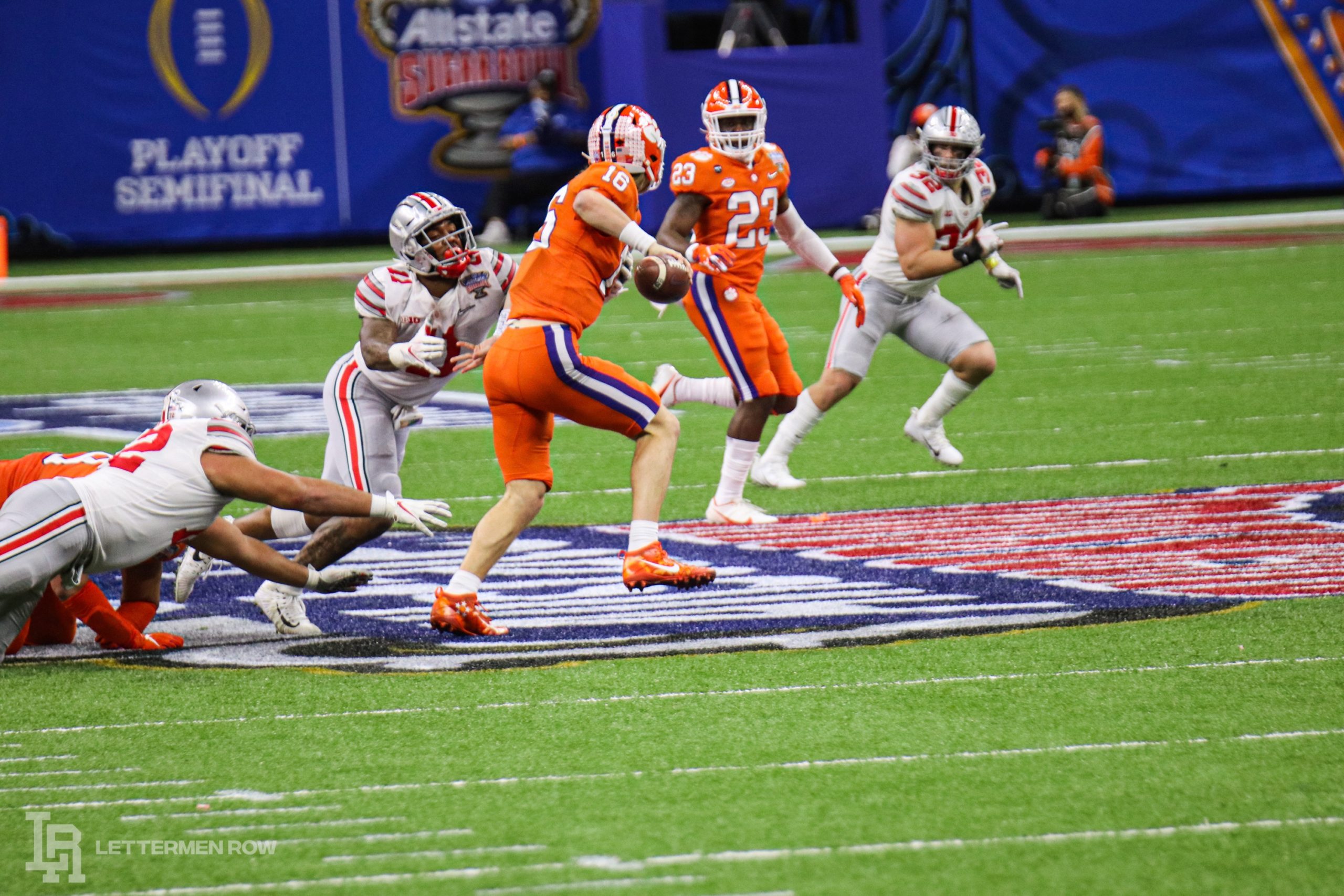 Ohio State senior Tyreke Smith is one of the top returning pass-rushers in the country. (Birm/Lettermen Row)

Tyreke Smith: The breakout season has been coming for Tyreke Smith. It was slated to come in 2019, but injuries held him back from reaching his potential. It was supposed to come last season, but the oddity of it all wasn’t conducive to a breakout for a defensive end, especially in just limited games. He had a huge Sugar Bowl performance, but then a positive COVID-19 test forced him out of the national title game.

Now in his fourth season in the program, Smith finally has a chance to become a superstar for the Buckeyes. Although he has just four career sacks in three seasons, Smith has every tool to be a dominant pass-rusher and next in line from the Buckeyes defensive end factory to the NFL. If he stays healthy, he has a chance to become one of the elite defensive ends in all of college football — and a first-round draft pick.

In the mix for Buckeyes

Jack Sawyer: The hype surrounding five-star defensive end Jack Sawyer has been building since he committed to Ohio State more than two years ago. He has been working with Larry Johnson since his sophomore year of high school to be ready for Buckeyes playing time, and he’ll certainly get it this season as a freshman. Sawyer has a special skillset that allowed him to rack up four sacks in the spring game. That same skillset could have Sawyer in the mix to become a Freshman All-American and instant playmaker for the Buckeyes defensive front. With Harrison and Smith locked into starting roles, Sawyer will be one of the first defensive ends off the bench. 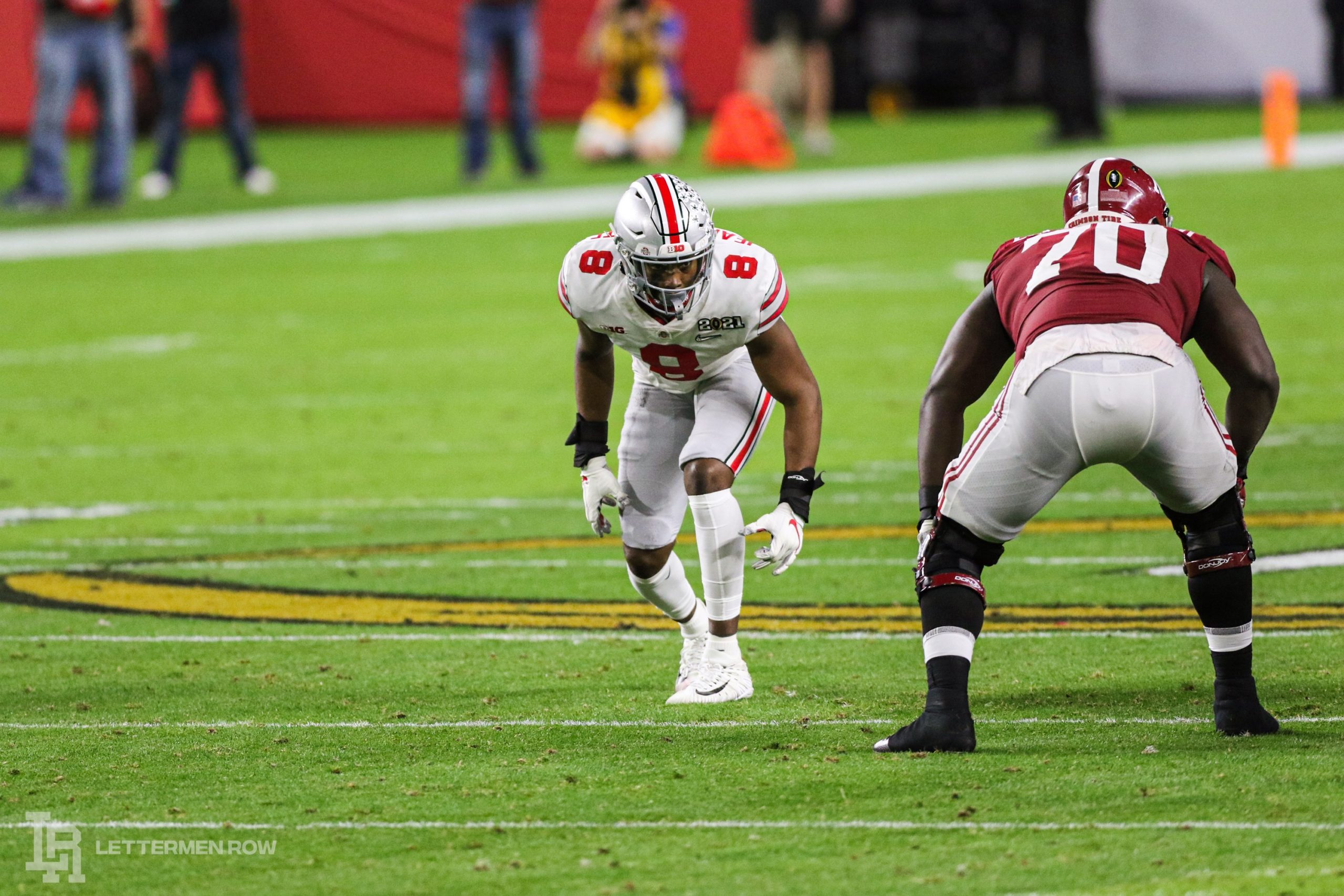 Ohio State defensive end Javontae Jean-Baptiste has a chance to break out this fall. (Birm/Lettermen Row)

Javontae Jean-Baptiste: After a redshirt season in 2018, Javontae Jean-Baptiste began to show flashes of stardom during the 2019 season, when he had two sacks and 14 tackles, appearing in every game. Last season was certainly different for the entire roster, but now Jean-Baptiste has a chance to explode in his fourth season working with Larry Johnson. He has added muscle to bulk up and is seemingly ready for a bigger role. The former four-star recruit will certainly be a key part of the defensive end rotation, and he could be a major factor for an Ohio State defense hoping to get back to its 2019-level production.

Tyler Friday:Â Another member of the 2018 defensive line class for the Buckeyes, Tyler Friday has battled through health and injury issues that have held him back at Ohio State. But the fourth-year defensive end now has a chance to become part of the rotation and solidify his standing in the defensive line room. Friday gives the Buckeyes versatility and options. He can line up inside as a pass-rusher or use size and power to win on the outside of formations. Whatever his role, he’ll certainly have a chance to contribute as a veteran.

Noah Potter: Although he is still listed as a defensive end, Noah Potter will likely play defensive tackle for the Buckeyes. He has added weight to bulk up and seems to be gaining steam in that position group. His versatility and experience outside at defensive end could prove to be valuable for Ohio State during the season.

Potential addition in the mix

J.T. Tuimoloau:Â After taking all five of his official visits in the month of June, Tuimoloau could make a decision about which school he’ll play for any day now. Much like Sawyer, Tuimoloau is a consensus top-five player in the class of 2021 and will immediately compete for playing time when he arrives — if he arrives at Ohio State.