COLUMBUS — Grant Toutant has settled on a decision. The four-star offensive lineman is decommitting from Penn State and has decided to play his college football at Ohio State.

After months of back and forth between his home in Warren (Mich.) and to visits with the Buckeyes and Nittany Lions, the 6-foot-7, 320-pound tackle initially committed last November. Toutant was the first commitment for Penn State in the Class of 2020 and has been active recruiter for James Franklin’s group, helping secure the addition of five other offensive linemen since.

He never really wanted toÂ consider another program, but a January offer from the Buckeyes drew his attention in a way he didn’t expect. After making multiple, unreported trips to Ohio State throughout the spring months, Toutant and his family were in Columbus last weekend and spent two nights getting to know the players, the coaches and program in a better way than he had before. It wasn’t just one thing that drew him to Ohio State, it was everything.

That’s why he’s now flipping to the Buckeyes.

“I donâ€™t have one specific reason I am making the switch,” Toutant told Lettermen Row. “Itâ€™s more a combination of things that are a better fit for me and my future. The mechanical engineering program and the ties they have with the automotive industry are one of the main reasons, but also the football program has always been at an elite level.

“Their attention to detail with training, nutrition, recovery, injury prevention and mentorship is something I have never seen before. I also felt a chemistry between the players and a culture that they live by which is very familiar to me. Itâ€™s something my high school team has that makes us champions. Each player works for the guy next to him, not just for themselves.” 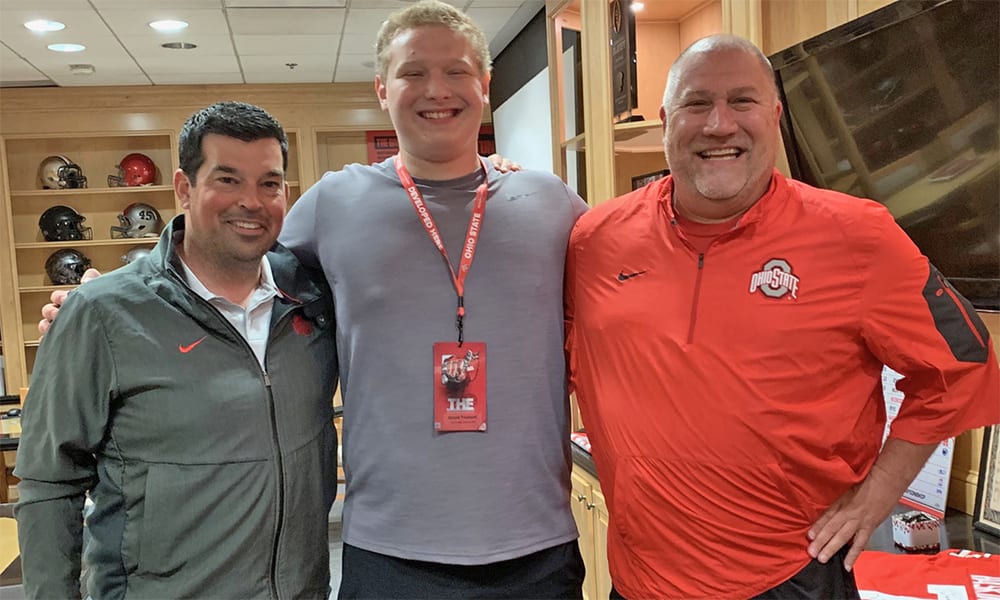 That doesn’t mean the decision was easy for Toutant. He’s previously been a pivotal piece of the Penn State class, and his contributions there have drawn him close to that program’s staff and the class.

“This was a very difficult decision because I wanted to stay loyal to my commitment, but knew in my gut that I had to at least explore the opportunity,” Toutant said.Â “Penn State has done an amazing job not only recruiting me, but also involving my entire family in the process and making us all feel like a part of their family.

“I have always been taught that everything happens for a reason. And when the offerÂ to play for Ohio State presented itself, after my Penn State commitment, I knew that it was an opportunity I could not overlook.Â It has always been a dream offer of mine that at the time I didnâ€™t think I would ever receive.”

Toutant, Michigan’s ninth-ranked prospect in the Class of 2020, has scholarship offers from Michigan State, Auburn, Wisconsin and Pitt among his first dozen. He’s spent the last few months working tirelessly on his craft and has performed well at some of the country’s biggest regional camps, including the Rivals 5-star Camp, the Under-Armour All-American camp at The Opening regional in Massillon at the end of May.

Ohio State is still likely to add one more offensive linemen in the class and will host a pair of top targets over the June 21 weekend with the hopes of finalizing that group.