The speculation, debate and conversations about Ohio State never end, and Lettermen Row is always ready to dive into the discussions. All week long, senior writer Austin Ward will field topics on the Buckeyes submitted by readers and break down anything that’s on the minds of the Best Damn Fans in the Land. Have a question that needs to be tackled, like the one today on Jordan Fuller? Send it in right here — and check back daily for the answers.

The Safety play really worries me and hopefully Fuller will be back soon. Any chance we see Proctor getting reps with the 1s?

From the second the decision was made to play it safe with Jordan Fuller and his hamstring issue, Ohio State was aware there were probably going to be some growing pains on Saturday against Oregon State. The Buckeyes know exactly how important he is patrolling the backline of the defense after his breakout season last year, and his value has only been enhanced by the leadership he’s shown that ultimately made him a captain this season. So, throwing Isaiah Pryor and Jahsen Wint out there for the first time without one of the nation’s most reliable safety nets always had the potential to lead to a couple crash landings.

But there is good news for the Buckeyes: Fuller should be back as early as Saturday against Rutgers, and both Pryor and Wint now have a taste of what it’s going to take to stay in the starting lineup.

“First, we hope to have Jordan back, that was a game-time decision,” defensive coordinator Greg Schiano said. “There was a lot of good things they did, and there was a lot of learning that they can take from that tape and that performance, which is good.

“So, we knew that there could be some growing pains there. Overall, I thought they were solid and made some mistakes, but now at least we have a leaping off point. Now we have to go and see how fast we can ascend, and if we get Jordan back that makes a big difference.” 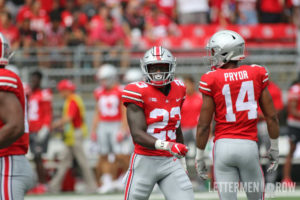 Jahsen Wint and Isaiah Pryor dealt with some growing pains at Ohio State with Jordan Fuller out. (Birm/Lettermen Row)

Fuller is a game-changer, there’s no question about that. And it was certainly unexpected on Saturday to see him held out of the lineup since there had been no previous mentions of a health concern for the junior, and hamstrings can be a notoriously tricky injury. The Buckeyes didn’t need to push him into action against the overmatched Beavers, and if there’s any doubt again this weekend against the Scarlet Knights, it can once again afford to be cautious ahead of the critical nonconference matchup with TCU.

If Fuller doesn’t go, that will once again but Wint and Pryor under the spotlight. It’s still probably too early for Josh Proctor to be jumping up the depth chart into that role so early in his freshman season, and Ohio State had consistently evaluated Wint and Pryor as the two best options to fill the vacant starting role alongside Fuller. The Buckeyes had spent the entire offseason calling that the biggest concern on the team, so it’s probably fair to assume that it’s still on top of the priority list coming out of the opener thanks to those couple breakdowns in the secondary. But it’s also possible that first-game nerves and maybe playing slightly different roles could have contributed to a mistake or two. Now the former is out of the way, and with that comes some game film of those reps that should help in the development process.

Obviously not everything went the way Ohio State would have envisioned defensively in Week One. But there’s nowhere to go but up now — and a healthy Jordan Fuller is a major reason why there shouldn’t be any panic for the Buckeyes.